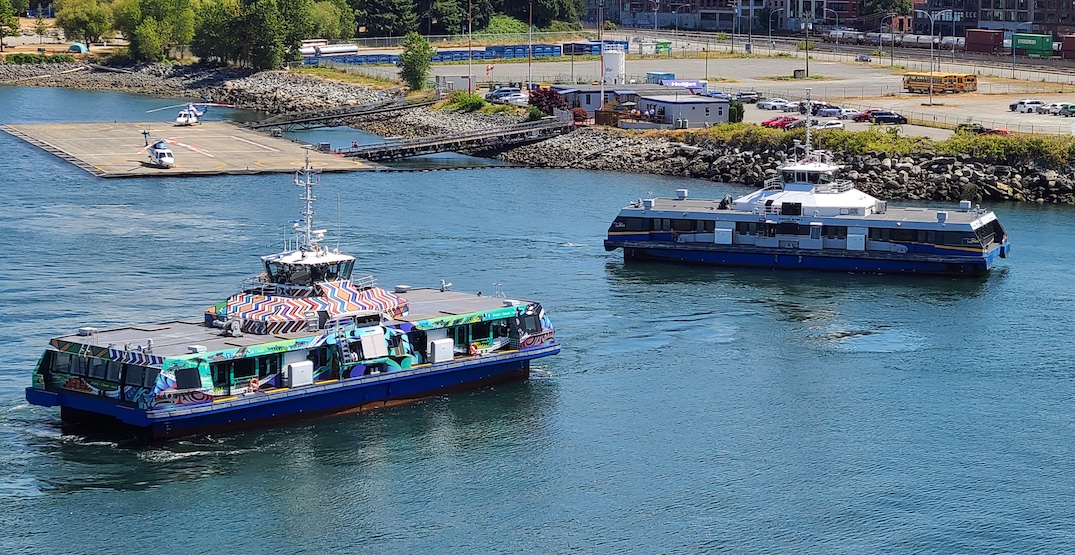 The new Burrard Chinook arriving with a sister SeaBus vessel during its maiden voyage on July 22, 2021. (Kenneth Chan/Daily Hive)

More of the pre-pandemic frequencies and services on Metro Vancouver’s public transit system will return on September 6, 2021, coinciding with the anticipated surge in ridership from the restart of in-class instruction at post-secondary campuses and the return of workers in offices.

On the West Coast Express commuter rail, Train 4 currently curtailed will return in the weekday mornings and afternoons, departing Mission at 6:55 am and leaving Waterfront Station at 5:30 pm.

To accommodate students returning to the University of British Columbia, the No. 44 UBC/Downtown express bus will be reinstated, and frequencies on No. 9 Boundary/UBC will be increased.

Students at Simon Fraser University will benefit from the reinstatement of No. 143 SFU/Burquitlam Station as an additional option to reach the top of Burnaby Mountain. Frequencies will also increase on 145 SFU/Production Way.

Other major routes set to see service increases, serving post-secondary institutions that include BCIT and Capilano University, include No. 116 Edmonds Station/Metrotown, No. 130 Metrotown/Pender/Kootenay, No. 222 Metrotown/Phibbs Exchange, No. 245 Phibbs/Capilano, and No. 255 Dundarave/Capilano.

Later this fall, TransLink is adding an expansion fleet of 25 double decker buses, which will serve routes that include No. 340 Scottsdale/22nd Street Station.

Free transit for children aged 12 and under begins on September 1, 2021, but there will be some restrictions for trips made on SkyTrain, SeaBus, and West Coast Express, where children are required to be accompanied by a fare-paying passenger or must pay their own fare to travel alone. Children in this age group can travel on buses for free without restrictions.

As of the middle of July 2021, TransLink ridership recovered to 48.5% of its pre-pandemic volumes — the highest since the start of the pandemic.