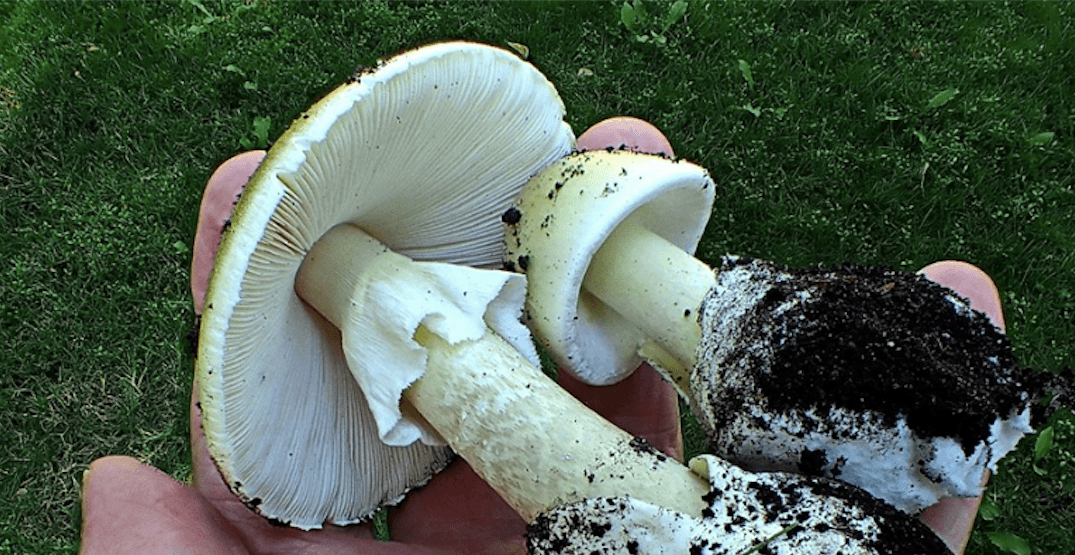 Vancouver Coastal Health (VCH) is warning residents about a deadly type of mushroom that has been seen growing the city.

Known as the Death Cap mushroom, it is similar in appearance to the Asian straw mushroom (Volvariella volvacea), and other common Asian varieties of edible Amanita species, such as Amanita princeps.

A VCH spokesperson told Daily Hive the toxic mushroom was discovered on a private property in the area of Yukon Street and West 10th Avenue, not far from City Hall.

“The mushroom was reported to poison control on Wednesday and we were notified on Thursday,” the spokesperson said.

According to the BC Centre for Disease Control, the mushroom isn’t native to BC forests, but rather, it is imported on the roots of trees which have been planted in Victoria and Vancouver.

At this point, health officials don’t know “for certain if other areas in BC are affected.”

Anyone who sees a death cap mushroom is asked to immediately report the sighting. Invasive Species of Concern provides an online reporting form, as well as links to further information.

If you have eaten a death cap mushroom

Consuming a death cap mushroom can lead to liver and kidney damage or even death, officials warn.

They note that in October 2016, a child died after eating a mushroom that was picked in downtown Victoria.

Those who suspect they may have eaten a death cap mushroom should immediately go to an emergency room, as “early treatment is important.”

To “speed up treatment and improve the outcome,” officials advise people to bring the specimens of the mushroom with them to the hospital, as well as information about the specific location where the mushrooms were found.

The symptoms of death cap mushroom poisoning include low blood pressure, nausea, and vomiting (which begins eight to 12 hours after ingestion). After up to 24 hours have passed, the symptoms seem to disappear and a person might feel fine for up to 72 hours.

However, symptoms of liver and kidney damage typically start “three to six days” after the mushrooms are ingested.