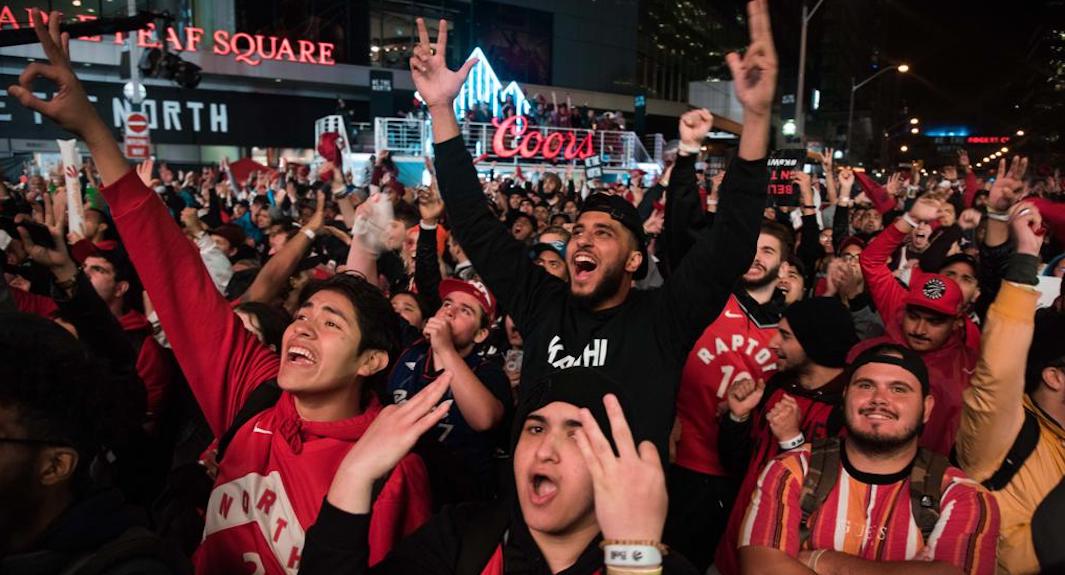 In just a months time, the Toronto Raptors have gone from a team determined to knock out the Orlando Magic and make it to the next round, to a team that’s one win away from winning its first-ever NBA championship.

And while the road to the NBA Finals hasn’t been easy, it’s been one hell of a ride — and the entire country has mostly been on board for every (stressful) minute of it.

In the past four weeks, the Toronto Raptors have not only united a city but a nation, with special Jurassic Park viewing parties popping up from coast to coast.

Regardless if you’re at the game, watching in Jurassic Park, or from the comfort of your home, watching King of the North, Kawhi Leonard, lead this team is a memorable experience. Because for a few fleeting hours, fans from all walks of life can come together and enjoy the game.

Because that’s what the Raptors do. They bring people together, especially during this playoff run.

They’ve served as a “unifying symbol to not only the city but to the country,” says Thomas Pigeon, CEO and President of Pigeon Brands, a strategy and design firm that works with multi-national corporations.

“I think what’s exciting is that people from coast to coast are holding up to this brand and they’re taking possession of it as if it’s their own,” said Pigeon.

Pigeon added that Toronto has always been one of the most “homogeneous urban markets in North America,” and that it’s “always been inclusive of different and unique cultures,” which is apparent when you look at the fans in Scotiabank Arena or in Jurassic Park.

“When you look at Raptors fans, you see fans from India, Somalia, Italy, and China…from all over the world, and they’re all coming together under this one brand, this crazy dinosaur, which has become a beacon of hope for Canadians.”

Over the years, the Raptors brand has evolved from simply being “this crazy raptor” to the inception of the dinosaur claw, and the phrase ‘We the North,’ which can be seen on everything in the city from clothing and banners to the sides of buildings and community basketball courts.

Because that’s what great brands do, they evolve and adapt over time, which is what the Raptors continue to do, and Pigeon says because of this, the Raptors brand is ready to “flourish.”

He added that the brand hasn’t just become powerful in Canada, but on a global scale, too.

The power of the brand has crossed the Atlantic Ocean, and on a recent trip to Italy, Pigeon says he overheard a group of people talking about the Raptors and their playoff run.

Because of this, he says he believes “the Raptors, right now, are more powerful than Tim Hortons.”

“I love watching a brand finally have its time to shine,” says Pigeon. “Over 20 years ago, they had this idea to bring sports team of this level to Toronto… they slapped a logo together, which has gone through various iterations. And now, everyone you see is donning Raptors gear.”

He added that “when we win,” it won’t just be the Raptors’ brand that strengthens, but also Toronto and Canada.

“I’m just pumped for that. It’s going to be awesome.”