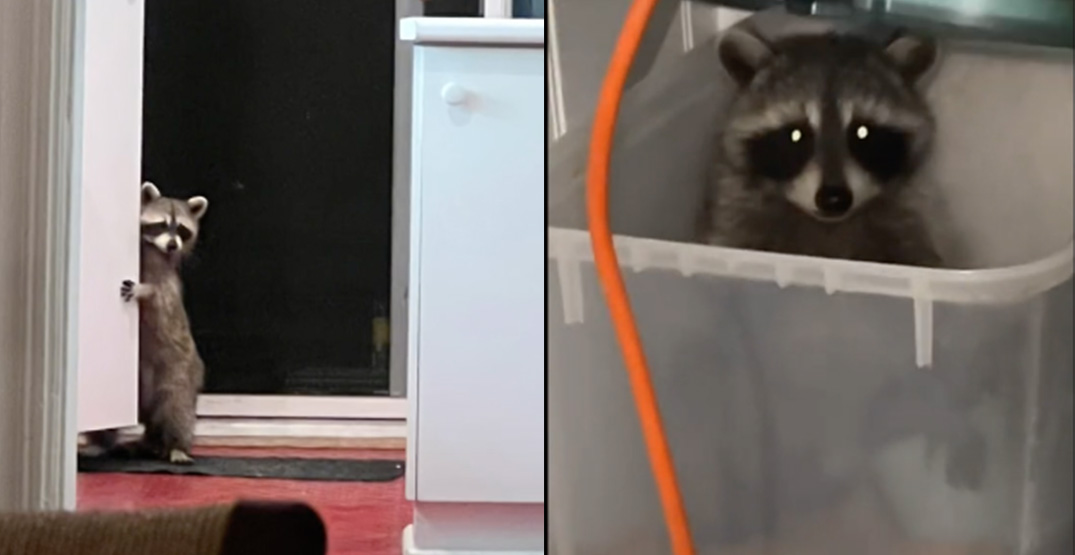 TikTok user @jewellersdayoff caught the bandits red-handed on video, which has racked up over 600,000 views.

“Oh my God, oh my God,” she says at the beginning of the video, slowly zooming in on a raccoon that appears to have entered her kitchen through the back porch door. “Get the f*ck out!”

The next shot is so comical, it looks like a scene out of a cartoon — the raccoon opens one of the cupboards like it owns the place.

“Are you f**king serious?” says @jewellersdayoff.

The woman then approaches the raccoon, so it retreats outside back onto the porch. When she opens the cupboard it was trying to get into, she finds a furry surprise.

A baby raccoon peeks out of a container of dog food.

“What do you want me to do with you?” she says as she zooms in on the baby’s admittedly adorable face.

She decides to close the container with the raccoon inside, bring it onto the porch, and hope that “the mother doesn’t f**king murder me.”

The TikTok ends with @jewellersdayoff trying to get the baby raccoon to hop out of the dog food container outside.

While @jewellersdayoff may have been annoyed by these trash pandas, people in her comments were very entertained by the whole ordeal.

“Ok, but am I the only one who loves raccoons? They are super resourceful 😂” one person commented.

“Lol him holding the measuring cup like he’s about to pour himself a bowl of cereal 😂😂” commented another.

The situation reminded some people of popular movies containing both humans and raccoons.

“Over The Hedge was sponsored by this video,” commented user @MoseSchrute. They’re referring to the DreamWorks animated film following a raccoon trying to steal snack food from humans.

Another user thought the TikTok could use a film score.

“When you opened the cabinet, all I could think of was the Mission Impossible theme 😂”

@jewellersdayoff replied with another TikTok of a group of baby raccoons scaling her fence set to the Mission Impossible theme song.

“They are little trash ninjas!” the caption reads.

It seems this isn’t her first run-in with the trash bandits.

She posted another TikTok showing photos of her confronting another raccoon after it destroyed her patio furniture.

“This was last year when I gave a sick one water and food. It destroyed our furniture and patio,” the video reads.

The one thing people should take away from this incident?

“Raccoons are not ‘harmless’,” @jewellersdayoff states in the TikTok. “Cute, but not harmless.”