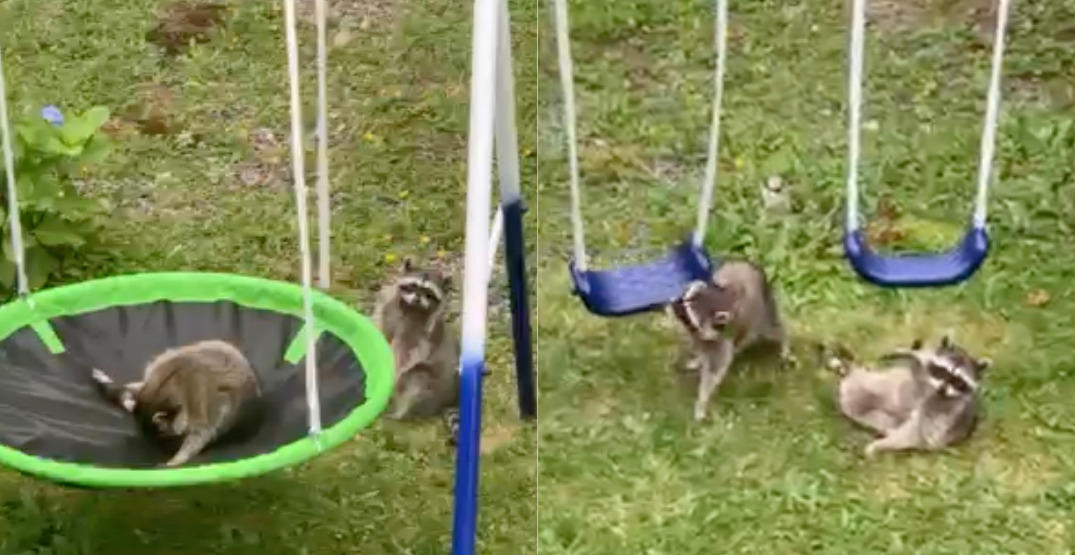 Two adorable raccoons that a Metro Vancouver woman has named the “bandit brothers” took over the playground in the backyard.

They seemed to be particularly fond of the backyard swing set.

“We get cubs or at least a mom and a cub almost every year in our backyard,” said Daily Hive reader Farhana.

“We are surrounded by trees so they have their dens set up there and roam around early sundown and all night.”

The two cute raccoons saw the trampoline and swing set in this particular Metro Vancouver backyard and seemed to be fixated. Farhana’s kids are five and 10, and we asked if they were upset that the “bandit brothers” took over their playground.

Farhana said her kids were the ones who suggested taking the video.

“They were there for about 10 minutes,” she said, and added that she had another video of the raccoons in her flat garden, but this video was “waaay cuter.”

The video shows the raccoon buddies wrestling, and taking turns playing with the swings and the trampoline.

Raccoons in general tend to be harmless, but they can mess with your gardens or pets.

Many people consider raccoons to be pests, but Farhana thinks differently about these bandits.

“They may be considered pests because they forage for food, but we are so used to them now that we aren’t bothered by them at all,” she said.

“We are all creatures, aren’t we? Just trying to survive.”