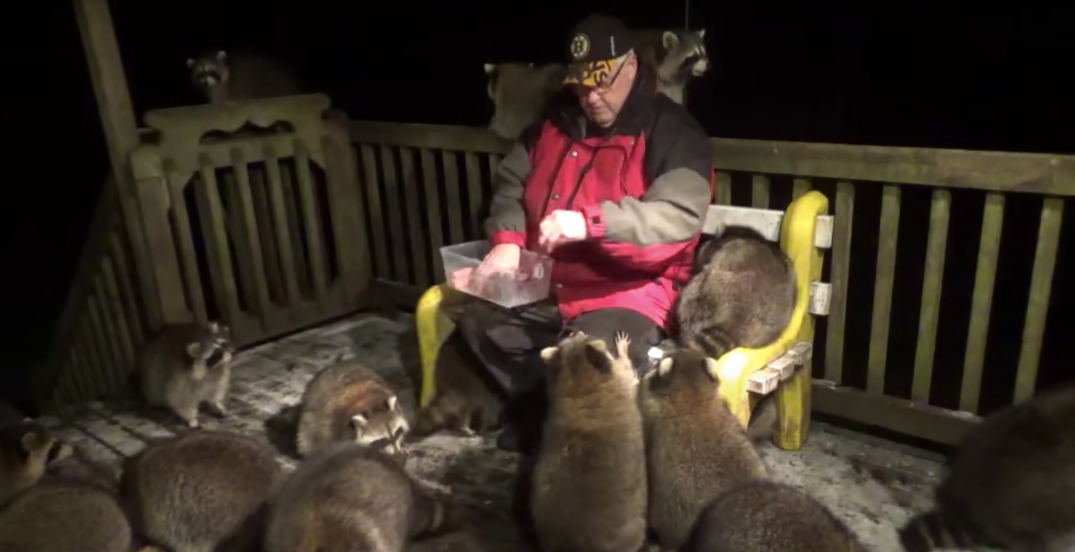 Raccoons get a bad reputation as being pests and trash diggers.

They’re actually quite cuddly and are very intelligent creatures. Some of them are even viral celebrities — at least thanks to retired RCMP officer James Blackwood.

Blackwood lives on a small, rural, four-acre lot in Churchville, Nova Scotia, and has shot to internet fame with the appropriate moniker the “Raccoon Whisperer.”

Since becoming an internet sensation for sharing videos of himself feeding dozens of medium and large-sized raccoons from his balcony, Blackwood has launched a website, clothing line, published a book, and says he’s had to change his phone number due to the number of people who constantly try to contact him.

“It’s 24/7 going on around here,” he told Daily Hive from his cozy home in Churchville. Blackwood says the raccoon-feeding videoing started in 2011 as a tribute to his late wife who started feeding raccoons in the late 90s. Blackwood’s wife passed away in the early 2000s and she “wanted me to look after all the raccoons.”

Since filming his daily feedings in 2011, he started monetizing his videos, which has now turned into a full-time job. “I’m supposed to be in retirement but instead I’m feeding raccoons,” he quipped.

Blackwood says the COVID-19 pandemic was a catalyst in helping him go viral. He says he wasn’t making much money through his content until a viral video in July 2020 boosted his subscriber count past 300,000. “My subscribers just kept rising and rising,” he explained, “I’m now close to 550,000.”

He says because so many people were stuck at home throughout the pandemic, what better way to spend time than watching herds of happy raccoons. He says his audience isn’t exclusively Canadian, “I’m seen by everyone, I have an audience in Spain, France, and a big following in Australia,” he told Daily Hive.

In November 2020, Blackwood uploaded a Tuesday night video titled, “Mobbed by Raccoons,” which has since garnered more than 25 million views on YouTube alone.

The Racoon Whisperer says he spends about $4,000 a month just on food for the furry little mammals, which also includes Hamburger Helper, Kraft Dinner, and A1 pizza, donated from a nearby pizzeria. “Plus the grapes,” he added, “Only the red ones though, they don’t like the green ones.”

Blackwood says it’s not uncommon for 25 different raccoons to show up for the feeding frenzy at a time, most of which weigh between 55 and 60 pounds.

The Raccoon Whisperer says his phone is “pretty hot” and that he often gets recognized when he heads out. He says he’s the number one YouTube channel in Nova Scotia behind local weatherman Frankie MacDonald.

Raccoon season for Blackwood hits its peak from April to December. He says there’s “crazy pressure” to get out content. “My vacation time is when they hibernate,” he said. Be sure to follow the raccoon-a-palooza on his channel.

“I upload a video every single day,” he admited. “God help me if I don’t, a lot of people want my stuff out there.”

And those raccoons gotta eat.