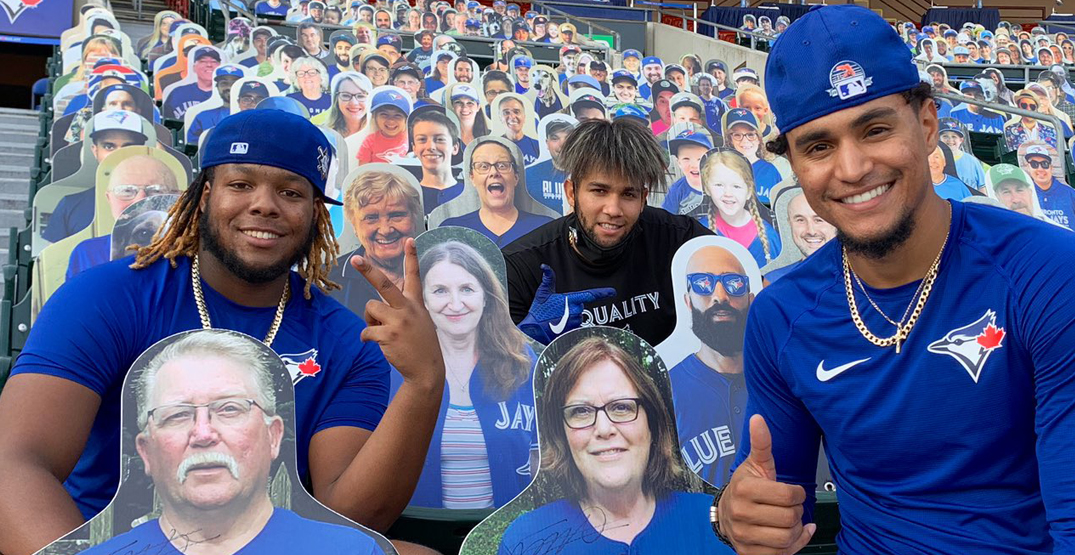 Toronto Blue Jays fans couldn’t witness games in-person last year, but at least two-dimensional versions of themselves did. Not just cardboard cutout fans, but babies, dogs, cats, and yes, even a horse.

Like many professional sports teams, rather than leave their stadium barren, the Blue Jays filled the seats with cardboard cutouts of their devoted fans. This year, the Blue Jays begin the regular season playing out of TD Ballpark in Dunedin, Florida, hoping to return to Rogers Centre in Toronto later this year.

In the meantime, the club brought back their “Cutout Crew” for a second consecutive season. Having a firm plan for a home ballpark made this year’s program much easier to roll out, as last year was a bit of a scramble.

“When it was determined that we were not able to play in Canada and we would be transitioning to the US, it was really important for us to find a way to bring our fans to the ballpark,” said Jessica Wood, manager of promotions with the Toronto Blue Jays, in a conversation with Daily Hive.

“A completely different situation from all other teams in the league — even though they couldn’t have fans either — at least they were in their home country. It was really important for us to engage and connect with our fans, especially when we couldn’t see them at home.” 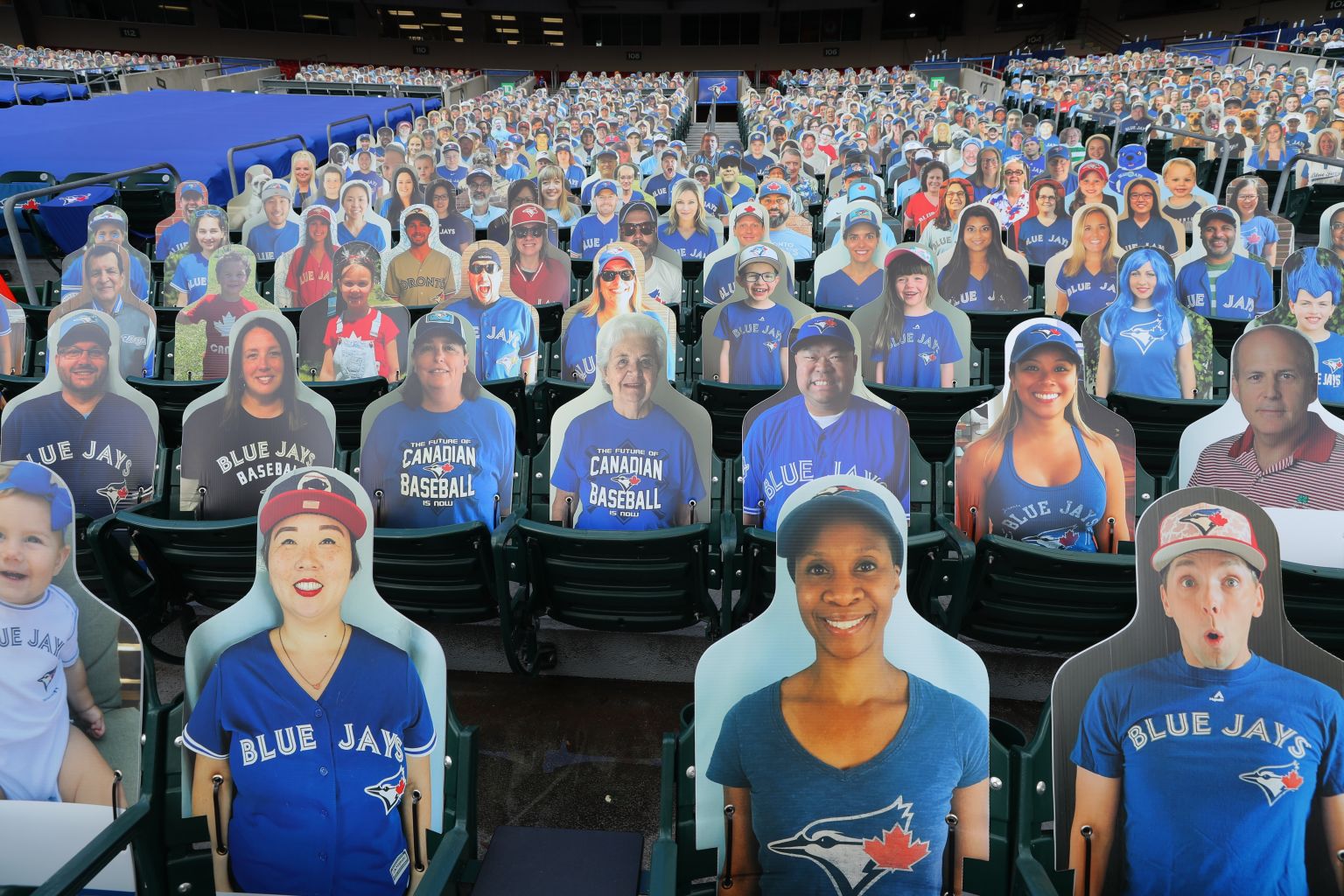 Once the Blue Jays settled on Buffalo as their new home and it was determined that fans couldn’t attend regular season games, the club went the route of other pro sports teams and filled the stands with cardboard cutouts.

“Last year was definitely quite a whirlwind getting those ducks in a row,” Wood said. “It was fortunate that we were able to have all the pre-research from connecting with other teams and working with vendors and understanding the process in Canada, so we had that framework we could apply when we were in Buffalo.”

The Blue Jays sought a Buffalo-based printing company Minute Print to print close to 3,000 chloroplast fan cutouts. This year, the team subcontracted a Florida-based company to do the same for the cutouts at TD Ballpark in Dunedin.

Since fans could submit their own photos for the cutouts, the fan submissions were wide-ranging; some put their own pets in the stands, ranging from dogs, cats, and even someone’s horse adorning a Blue Jays cap.

The team also had their most loyal and front-facing fans make the trip to Sahlen Field, including the famed “Home Plate Lady,” and the lead singer of Rush, Geddy Lee. But the most famous cutout from the 2020 Blue Jays season didn’t belong to the team at all.

Mid-way through the season, the Blue Jays bullpen “adopted” a cardboard cutout of a golden retriever from Tropicana Field in Tampa Bay. For whatever reason, the team grew fond of the very good boy and made him an honorary member of the bullpen.

After a fur-ocious tryout, we’ve decided to keep him 🥰🐶

Once the Blue Jays relievers claimed the puppy as their own, the pooch travelled with the team. The dog returned home to Tampa Bay during the Blue Jays-Rays first round postseason series at the Trop.

“All of a sudden, we’re seeing this dog emerge in the bullpen and we were like: ‘Where did this come from?’” Wood said. “It was a fun story to see how the story would travel. We called it the ‘rally retriever.’

“When we met with Tampa in the postseason, it was interesting to have the dog returned. It was one of the best stories of last year; seeing how the players resonated with this chloroplast dog.”

In addition to the fan cutouts, the Blue Jays had a dedicated section of Sahlen Field with cardboard cutouts of the players’ families. Some even posed with the 2D versions of their inner circle.

At the conclusion of the 2020 season, the Blue Jays gave fans the option to have their cardboard cutout mailed to them, or for fans living close to Toronto, they could visit the stadium and pick up their cutouts in person.

For a small subset of fans, picking up their fan cutout of themselves was the sole in-person interaction they had with the Blue Jays all year.

“My day-to-day job revolves with interacting with fans at the ballpark, and it’s definitely been really tough without seeing them in person,” Wood said. “Cutouts are a really fun way to not only see our Blue Jays fans, but to feel connected with them.

“It was pretty incredible to see the real human meet the 2D version of themselves. It was really nice to see how excited they were, and they would take a photo together, and you would see that posted on social media.”

Many fans have added their cardboard cutouts as a piece of memorabilia to the Blue Jays collections, and some even posed with their cutouts during virtual autograph sessions with Blue Jays players during Virtual Winter Week earlier this February.

At the end of the 2020 campaign, the Blue Jays shipped the cutouts to fans all across Canada, some as far as the United Kingdom and Asia.

This year, the Blue Jays assure fans the cutouts will travel with the team, wherever they end up playing this season; whether that’s Dunedin, Buffalo, or Toronto.

Interestingly enough, the cardboard cutouts will mingle with the in-person fans at TD Ballpark this year, as the stadium allows 15% capacity for spring training and regular season games.

Until Canadian Blue Jays fans can scan their tickets and walk through the turnstiles in person, at least they have a designated seat at the ballpark; albeit, it’s occupied by a cardboard facsimile.