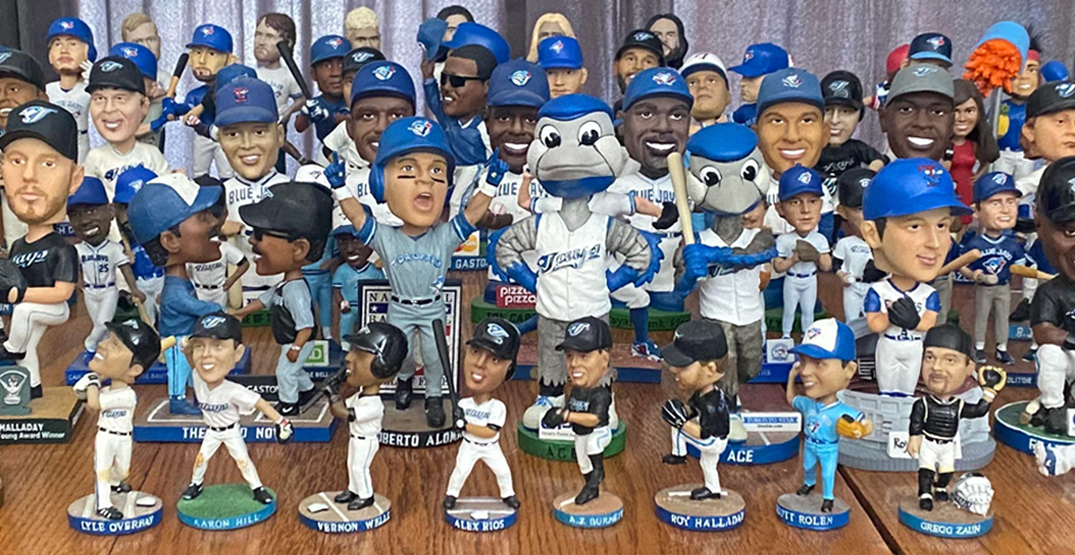 They’re the most ubiquitous giveaway at sporting events, but for diehard collectors, bobbleheads are serious business. Some collectibles fetch hundreds or even thousands of dollars.

One couple from Barrie, Ontario, spent their fair share of time and money on amassing one of the most impressive collections of Toronto Blue Jays bobbleheads this side of the 49th parallel.

Todd and DD Smith recently posted their entire Blue Jays bobblehead roster on Reddit, and the post soon took off, as they received plenty of kudos and queries from fellow diehard collectors.

They started collecting bobbleheads in 2014 when DD received a Jose Bautista bobblehead as part of a Jays Care gift package at a Blue Jays game. From there, the couple made it their mission to get their hands on every Blue Jays bobblehead created.

“I thought it was pretty cool,” DD told Daily Hive. “When I met Todd, I showed it to him, and we just kind of laughed about it. We started going to the games to get them, and it sort of snowballed.”

They make the trek down from Barrie and would often plan overnight stays in Toronto around the bobblehead giveaway games. Then the Smiths lined up for hours among the thousands of fans outside the Rogers Centre to get their hands on the little porcelain figurines.

Over the past seven years, they’ve used various methods of scavenging to amass their collection of 81 Blue Jays bobbleheads; from eBay, to Kijiji, to Facebook groups, and even private sales with someone they call “Mike the bobblehead guy.”

The Smith’s collection has every Blue Jays bobblehead you can imagine, from the obscure and random, to the classics. There’s a Foo Fighters set with every member of the band in Blue Jays jerseys, to broadcasters Hazel Mae, Buck Martinez, and Jerry Howarth.

The couple are such big bobblehead fanatics that they had custom bobbleheads made as the cake toppers for their wedding in 2019. The figurines feature the Smiths in their Blue Jays jerseys and caps, just like the players. 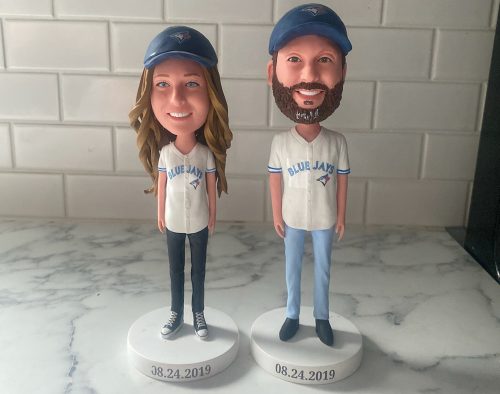 They even have two mascot bobbleheads featuring the Blue Jays mascot Ace, which, believe it or not, is among the rarest in the entire collection. Smith secured the “Ace swinging a bat” bobblehead by pure happenstance, posting a local “wanted” ad on Kijiji.

A current listing on eBay has the bobblehead listed for $3,000 CAD.

“Everyone was telling me: “You’re not going to get an Ace swinging. You can’t find them,'” Smith said. “And just totally random, some fluke, some guy that went to the game. That is the hardest one to find.

“As soon as I got it in my hands, I looked at it, and I couldn’t believe it.”

The seller was flabbergasted that Smith was filling to pay $600 for something that was given away as a promotional item, but he was happy to fork over the money to land the elusive bird.

Two of the other extremely rare Blue Jays players in their collections are a Vernon Wells wall-catch bobblehead and a Frank Thomas bobblehead. A Wells bobblehead sold for $500 CAD on eBay just a few months ago.

The Thomas bobblehead is especially sought-after by collectors because the team released the veteran slugger a month before his giveaway day. Very few of these figurines have seen the light of day.

Two Thomas bobbleheads recently went for over $700 CAD on eBay back in December.

Wouldn’t be a first for the Jays, either. In May 2008 they’d scheduled a Frank Thomas bobblehead day. They released the Big Hurt in April. pic.twitter.com/rJ137hGLnz

Among the entire set, one of Todd’s favourite bobbleheads is the Canadian-themed Corie Koskie figurine. DD is partial to the old school “fatty” bobbleheads, as the Smiths coined them; which are heavier and larger than the modern giveaway day bobbleheads.

The Smiths just secured the final Blue Jays bobblehead on their wish list; a mini Adam Lind bobblehead. After years of procuring these bobbleheads, they now have a cabinet to display their collection proudly in their home.

Todd estimates they’ve spent close to $10,000 over the years, but he’s proud of the collection he and his wife have built. One day they’re hoping to build a Blue Jays-themed bar in their house, and the little Blue Jays figurines will be front and centre.

“Some of our friends think we’re a little crazy,” Smith said. “I don’t like telling too many people sometimes what I’ve paid for bobbleheads, because they’re like: ‘You’re spending that much money on a bobblehead?’ I’m like: ‘I can’t help myself. I’ve got to get this bobblehead.'”

For the time being, their Blue Jays bobblehead collection is complete, but every year, the team releases and handful of bobblehead giveaway days featuring the club’s most prominent players.

While they likely won’t be attending any Blue Jays games this year, the Smiths look forward to getting back to the Rogers Centre when it’s safe to do so, and driving home with a miniature momento of their time in Toronto.