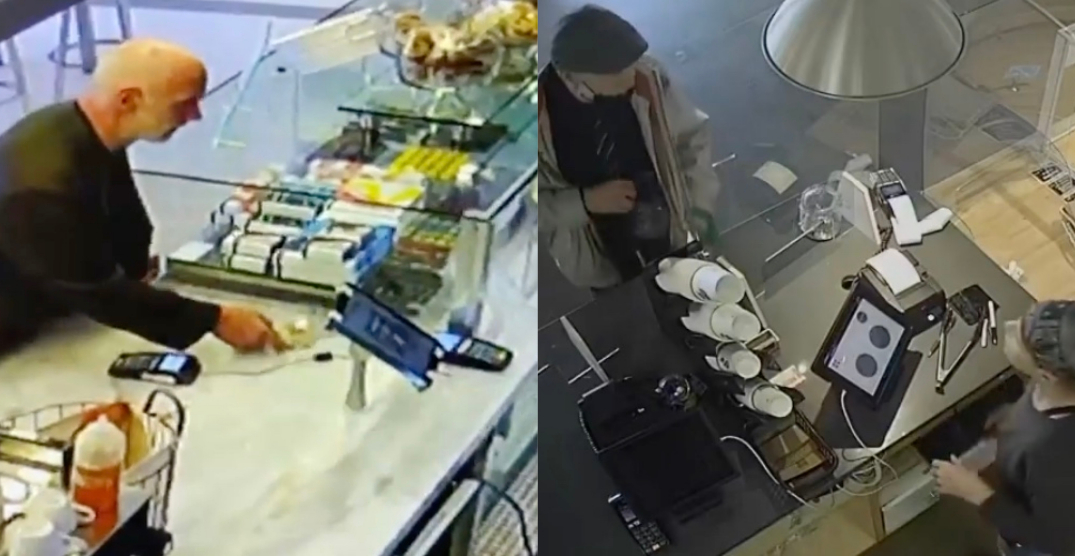 As a West Vancouver pastry shop is still trying to find answers related to the theft of a tip jar at its front counter, a cafe in another city says they’ve been victimized by the same person — and believe the perpetrator is a serial offender.

Laura’s Coffee Corner believes its tip jar was nabbed by the same person who was shown ripping off Temper Chocolate & Pastry in a recent Instagram video.

Laura’s is located in White Rock, around an hour drive away from Temper Chocolate & Pastry.

While we can’t share the name of the suspect because they have not been charged, a spokesperson with Laura’s Coffee Corner alleges the same person stole their tip jar and also stole from nine other businesses on May 9.

“I recognized him right away yesterday when I saw that video,” owner Laura Cornale told Daily Hive.

Laura’s Coffee Corner shared a video of the incident back in the spring as well.

In a bulletin at the time, White Rock RCMP said they were investigating a 58-year-old man from Vancouver for thefts at five different businesses in the city.

“[The suspect] casually stole tip jars as he went from business to business during opening hours,” Mounties said.

The RCMP release goes on to say that the “prolific offender” was identified by a business owner in Vancouver who had the same thing happen to them.

“Five incidents were discovered in White Rock, resulting in hundreds of dollars being taken. This individual has over a hundred convictions for property and other offences, and a warrant will be requested for his arrest.”

Yes, the RCMP states that this person had over 100 convictions.

White Rock RCMP could not confirm that the suspect in the Temper video is the same person who stole from Laura’s Coffee Corner, but a White Rock RCMP spokesperson did tell Daily Hive that there would be a warrant issued for the arrest of the White Rock suspect next week.

Daily Hive received more information from a spokesperson for Temper about the incident earlier this week.

The staff member told Hodge that the man was trying to pay with his credit card, but then said out loud “my card isn’t working so I will go get my other one from my car.”

He left the shop and didn’t come back.

“Chef Hodge was stunned to see someone steal money off the counter all while others surrounded him. Luckily for Temper Pastry this act of theft did not affect their establishment in a great way, but rather, sent shock waves through this small community that someone would even have the audacity to do this,” said a spokesperson for Temper.

“Hopefully by sharing this video it allows other businesses in the area (and surrounding communities) to be more vigilant.”

Prolific offenders in BC

Many BC residents have made their concerns known about prolific repeat offenders in the province.

BC Attorney General David Eby announced a plan to combat these types of offenders in May of this year. Coincidentally that announcement was just four days before this particular prolific offender went on a thieving rampage in White Rock.

After some more digging on the internet using the name of the alleged suspect who is accused of being the same person involved in the Temper theft, we uncovered other crimes this person may have been behind.

A search through BC court records reveals that the suspect’s crimes go all the way back to 2002. The offences include assault, assault with a weapon, fraud and theft. While the suspect has received jail time, he hasn’t received a significant sentence. The sentences range from one day to several months of jail time, as well as some conditional sentences.