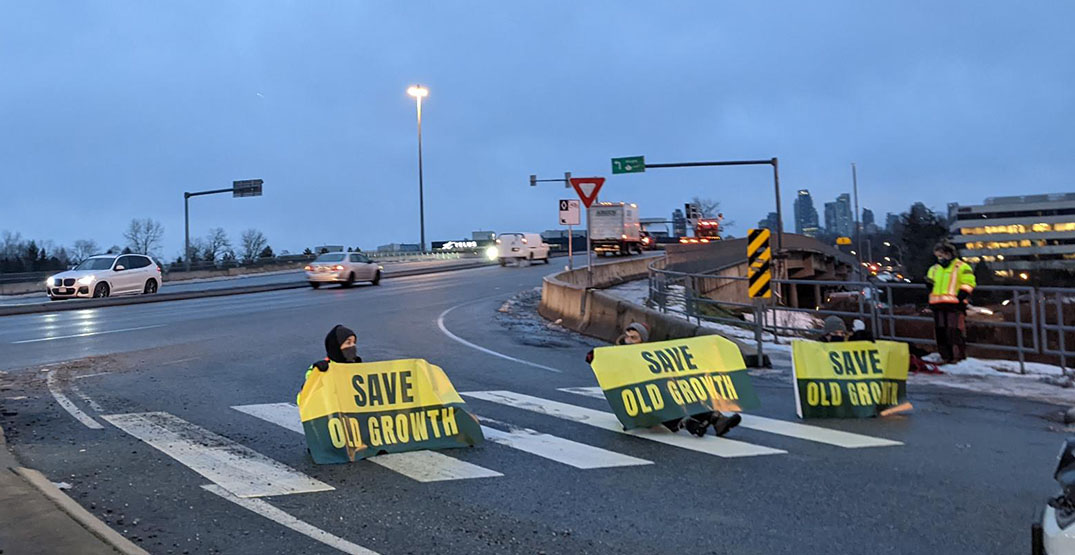 Police arrested three protesters who were blocking a Highway 1 ramp in Burnaby during a demonstration denouncing logging of old-growth forests.

Burnaby RCMP said a dozen or so people blocked the Willingdon off-ramp beginning at 7:45 am, and it caused significant traffic delays during the morning commute.

Police also said one demonstrator climbed on the hood of a car that was forced to stop because of the blockade.

Demonstrators have a right to lawful, peaceful and safe protest, but this demonstration caused significant safety concerns for those demonstrating and for the travelling public, said Cpl. Mike Kalanj with Burnaby RCMP.

Three people have been arrested after a demonstration shut down traffic on the Willingdon off-ramp from Highway 1 this morning, causing traffic delays and safety concerns.
News release: https://t.co/gvUD7J0qRl pic.twitter.com/pkZBA4PwVd

The protesters belonged to a group called Save Old Growth, which is an offshoot of Extinction Rebellion — known for its traffic-blocking protests demanding climate action.

Save Old Growth conducted simultaneous demonstrations in Nanaimo and Victoria Monday morning, and the group said a total of seven people were arrested from all three events.

The group plans to block Highway 1 off-ramps every week, saying the frequency and scale of action will escalate until old-growth logging is stopped in the province.

These protests are happening after tensions heated up at Fairy Creek on Vancouver Island last year, the site of a protest camp trying to prevent loggers from taking old-growth trees.