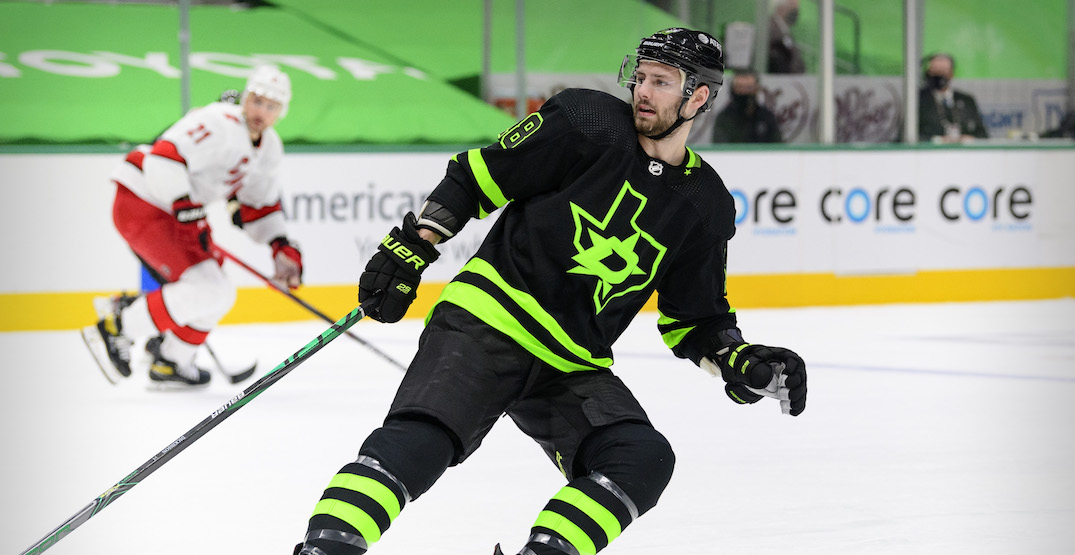 Left with a choice of protecting Kole Lind, Jonah Gadjovich, or Matthew Highmore at forward for the Seattle Kraken expansion draft, the Vancouver Canucks chose to find someone else to protect instead.

The trade likely shores Vancouver’s gaping hole at centre on the third line, with Dickinson profiling as one of the better defensive pivots in hockey right now.

Jason Dickinson, traded to VAN, is an all-defence middle six forward who had some of the best scoring chance suppression numbers in the league this year. #Canucks pic.twitter.com/CBPISwtuAt

Here are seven things to know about the newest member of the Canucks.

When the NHL paused games during the 2020 playoffs, it was Dickinson who stood on the front lines to speak with the media, along with Ryan Reaves, Pierre-Edouard Bellemare, Nazem Kadri, and Bo Horvat in the Edmonton bubble.

Dickinson (to Horvat's right) was front and centre when players chose not to play for BLM in the bubble last year. He was Dallas' representative. pic.twitter.com/AHYCBFM8jf

Dickinson was also one of four players to take a knee for the national anthem as well.

Multiple players took a knee for the national anthem ahead of the Stars/Golden Knights game.

“I have people of colour in my family,” Dickinson said at the time. “My dad comes from the islands, and one of my uncles is Black. It was easy for me, easy decision.”

2. Of Scottish and Caribbean Heritage

Jason’s younger brother Josh previously told the story about how his mom and dad became the unlikely inspiration for the Dickinson boys to pursue hockey.

“My [mom and dad] didn’t get to grow up playing hockey. My mom is from Scotland and my dad is from the Caribbean, and they both loved the game. When they finally came over to Canada, they said, ‘If we couldn’t play, let’s put them in and see if they love it.’ They did that, and it turns out my brother and I both loved it.”

Despite being chirped by his junior coach, former Canucks player Scott Walker, for being mistaken as the stick boy due to his baby face, Dickinson did have a fairly impressive junior hockey career.

During his draft year, Dickinson posted a respectable 47 points in 65 games, but it was his two-way ability that pushed him into the first round of the draft.

The Guelph Storm had a fantastic Round Robin, leading all four teams with a 3-0 record. One of their victories was a 7-2 drubbing of the London Knights, a team that featured Josh Anderson, Max Domi, Mitch Marner, and the current Canucks captain, Horvat.

However, the Storm lost to the Edmonton Oil Kings, a team they had beat in the Round Robin, during the tournament finale.

After posting 53 points in 73 games as an AHL rookie, Dickinson got his first taste of NHL action at the end of the 2015-16 season.

He made a good first impression by scoring in his first game against the Colorado Avalanche.

Dickinson has shown an ability to score highlight-reel goals in the past.

That being said, his scoring rates at even-strength have decreased in each of the past three seasons. He scored at a third line rate from 2018-2020, but his 0.86 points-per-60 last season was basically a replacement-level rate.

Again, this was a player acquired for his defensive acumen, but you’d like to see a bit more progress on the offensive side as well.

5. Ice time has increased over the past three seasons

Dickinson has been an NHL regular now for three seasons. Here’s how his ice time has increased throughout each year:

He’s also seen moderate improvement in his face-off percentage over the last three seasons, although this is still an area that could use some improvement:

Josh Dickinson, two years younger than his brother Jason, is an undrafted centre who was signed by the Avalanche in 2018 after playing for a year at Clarkson University. He spent three years with the organization, bouncing between the AHL and the ECHL, before he was traded in a package to the Chicago Blackhawks at the 2021 trade deadline in exchange for Carl Soderberg.

Dickinson dropped an interesting nugget in an interview following his trade to the Canucks.

“I was a big fan of Vancouver when they made their Cup run in 2011,” Dickinson told Thomas Drance of The Athletic. I loved the Sedins and I loved (Ryan) Kesler mainly. I saw a lot of myself in him. There was a lot I liked in his game, so I gravitated to that.”