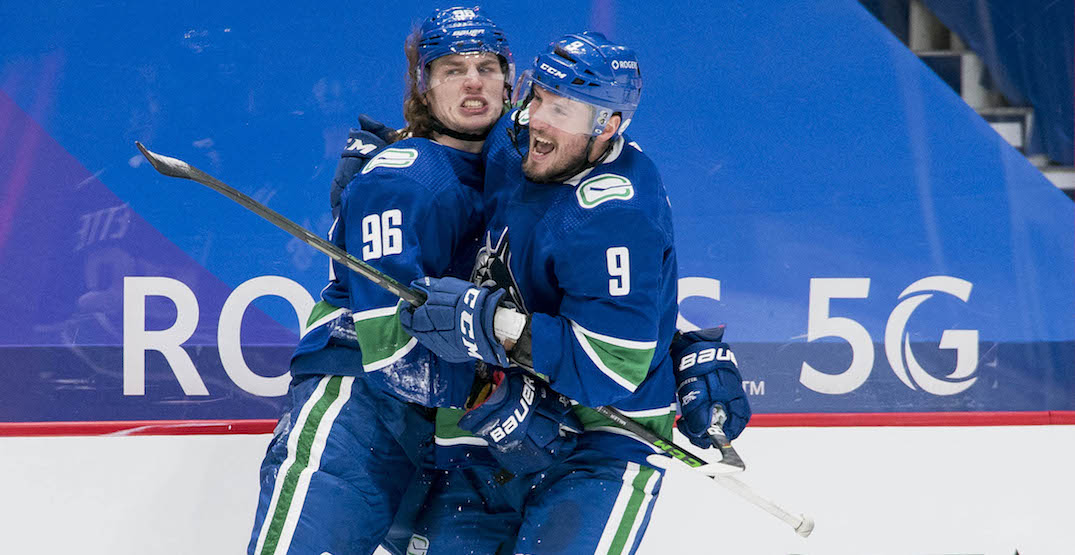 Even after winning four of their last five games, the Vancouver Canucks are still a long-shot to make the playoffs.

That’s an indictment of just how bad and unlucky they’ve been through the first half of the season.

Despite the miraculous run the Canucks would need in order to make the playoffs, the team is beginning to tease potential.

Right now, the number one reason why the Canucks can climb back into the playoff hunt is because of Thatcher Demko. He’s won four straight games, was just named the NHL’s Second Star of the Week, and is looking like an absolute analytics darling.

Saw some numbers had Vasilevskiy as a clear front runner for Vezina, and while he was deadlocked with Fleury going into the weekend, 🌸 actually moved ahead since the, so we took a closer look at the top goalies this season: https://t.co/hVfYUdQmLq pic.twitter.com/3CuB2Mcv3H

Aside from that, the Canucks’ top players are carrying this team. Brock Boeser and J.T. Miller both have 10 points in their last 10 games, and they’ve been able to lead the Canucks to three straight wins without Elias Pettersson in the lineup.

Today, however, I want to focus on areas where the Canucks must improve if they actually want to make the playoffs.

They’ll need Demko to be a miracle-worker, they’ll need their stars to continue performing, but they’ll also need these three things to happen.

In 2019-20, the Canucks have the 14th-most shot attempts at five-on-four, but ranked bottom 10 in scoring chances, high danger chances, and expected goals-for. However, they were buoyed by the third-best shooting percentage with the man advantage and finished with the fourth-best power play in the league.

This season, the power play has generated more than last season… but the same puck luck isn’t there. They have generated the fifth-most scoring chances at five-on-four, but their shooting percentage ranks 23rd.

Currently, the Canucks power play ranks 18th overall in the league. The underlying numbers show that they’re creating more chances than last year, but they’ll need to convert on more of those chances to stay in the playoff race. Thankfully, four Canadian teams (Montreal, Toronto, Ottawa and Winnipeg) all have penalty kills with an efficiency below 80%.

2. More offence from the bottom-six

The Canucks aren’t the only Canadian team facing a depth crisis… but their situation may be the most dire.

The forward depth in Vancouver last season wasn’t terrific, but at least you had some consistent secondary scoring from Adam Gaudette and Jake Virtanen. That was insulated by modest production from Josh Leivo, Brandon Sutter, and even guys like Antoine Roussel, Loui Eriksson, and Zack MacEwen.

This year, too many players have taken a step back.

Tanner Pearson, Gaudette, Virtanen, Sutter, Beagle, Eriksson, Roussel, and MacEwen are all on pace to register fewer points per game than last year. Tyler Motte is the only depth forward producing beyond last year’s rate, but he’s been sidelined for over a month now with an injury.

Gaudette and Virtanen have shown flashes recently that they can rediscover their scoring touch. They represent the Canucks’ best shot at having some consistent secondary scoring, but this is something that must drastically improve if the Canucks are actually going to make the playoffs.

3. Holtby needs to be at least average

There’s a lot of confidence in Demko currently (and rightly so), but he can’t play every game for the Canucks moving forward.

That’s why Braden Holtby must be much, much better than he’s been so far this season.

There are 39 goalies who have started more than 10 games this season. Of them, Holtby’s quality start percentage (the number of starts in which he’s given the Canucks an above-average save percentage), is dead last.

Holtby has three quality starts in 11 appearances so far this season. On too many nights, he’s been part of the problem, more than the solution.

Goalie expert Kevin Woodley of InGoal Magazine talked about the Holtby dilemma on the latest episode of the VANcast with Thomas Drance and Jeff Paterson.

“I’m watching Holtby do the work [in practice], and he is working,” Woodley said. “But, whether the work fits [with Holtby] becomes the question.

“This is a guy that played on instinct and feel. There were a lot of loose parts to his game for a long time. They’re trying to add a foundational layer to his game, and you can see, he’s caught in between when he gets in the net now.”

The Canucks have 27 games remaining, meaning that Holtby will probably have to start at least six games. With this being the first time in a long time where he’s the back-up, can he come in and win, say, half of his starts?

He’ll probably need to if the Canucks are going to make the playoffs. Judging by the hill this team has to climb, they can’t afford to have their back-up give them one good start every four games.