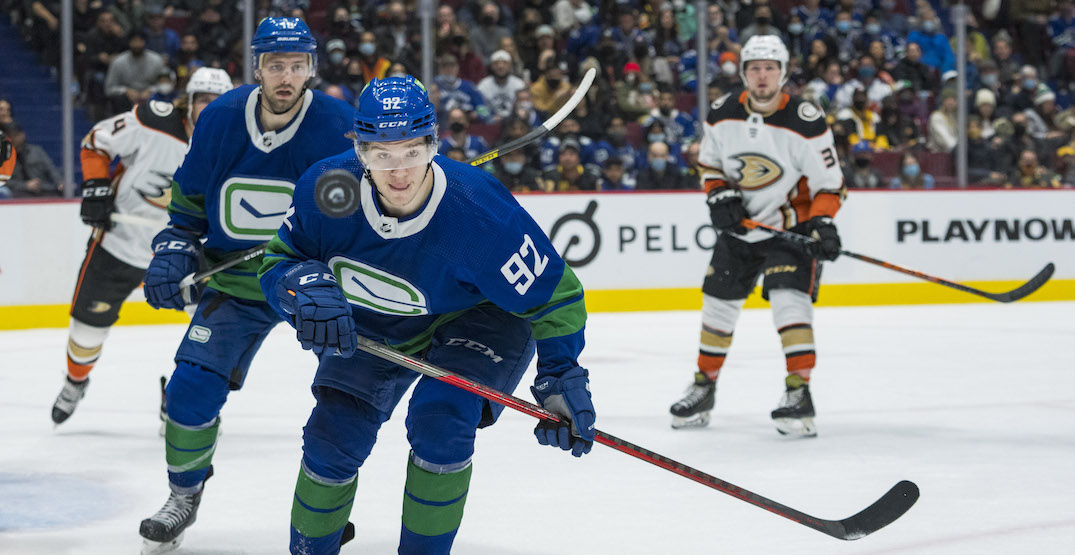 For the fifth straight season, the Vancouver Canucks have an impressive rookie in their lineup.

Vasily Podkolzin has three goals in 11 games with the Canucks this season, and is getting better with every game. He’s earning the trust of his coach, playing more in each of the last two games than he had in any of the previous nine.

“He’s really come a long way,” Travis Green told reporters after Tuesday’s game. “From day one of camp, a young player that was just trying to understand the league. [He] had days where he looked a little out of place I thought, but has really rapidly put in the work to become a better player.

“Give him a lot of credit, when you talk to him, he really takes it to heart what you’re trying to teach. I think the quickness in his game has improved immensely from day one. He’s become a better hockey player in the last 10 games.”

While Green is more situated on the improved details in Podkolzin’s game, it’s hard to ignore some of the goals he’s scored to date.

All three of his first NHL tallies have been of the highlight-reel variety.

“He’s probably got, by far, one of the hardest shots on our team,” Bo Horvat told the media on Tuesday morning. “His wrist shot is elite by far and it seems like every goal he scores, he’s put it top shelf.”

For two of Podkolzin’s first three career goals, the primary assist has belonged to Conor Garland.

The Rangers leaned on the power play for scoring, while both #Canucks tallies have come at 5-on-5. pic.twitter.com/UmGjqUM06W

Aside from the beautiful tallies, Podkolzin’s metrics while playing with some of the Canucks more talented forwards have been impressive.

Aside from the 4th line, everyone looking pretty good. Podkolzin leading the way. pic.twitter.com/cm6Og1mu02

In 39 minutes together at even strength, Podkolzin and Garland are controlling 65% of scoring chances while they’re on the ice. Only Horvat has a higher scoring chance differential (66.7%) with Podkolzin among Canucks skaters.

During Tuesday’s game against Anaheim, Horvat, Garland, and Podkolzin had a dominant third-period shift when the team was trailing 2-1. On the night, that line controlled 90% of shot attempts in 5:24 of ice time.

He’s also shown a willingness to throw the body around, ranking fourth on the team with 7.7 hits per-60.

Green gave Podkolzin a small reward for his improved play of late.

On Tuesday, the 10th overall selection from 2019 found himself on the second power play unit. He didn’t see a ton of ice time with the man advantage (you can blame the first unit for that) but when he was out there, Podkolzin did line up in the bumper spot.

That spot is typically occupied by Horvat on the first unit. It’s clear based on his deployment that Green wants to utilize the rookie’s dangerous wrist shot.

Podkolzin has earned the right for some special teams’ time, but where the Canucks could really use his help is on the penalty kill.

The youngster has previously succeeded on the PK in lower levels of play.

Here he is single-handedly killing off a penalty for Russia’s at the World U18’s back in 2019:

Here is Vasili Podkolzin on the penalty kill showing off some of the skills that have him rated so high for the upcoming NHL draft. #U18Worlds #NTDP pic.twitter.com/oj8iGnuYxH

Based on Podkolzin’s previous penalty-killing prowess, it seems like a savvy decision to test the youngster shorthanded. It’s not like the Canucks penalty kill could be much worse.