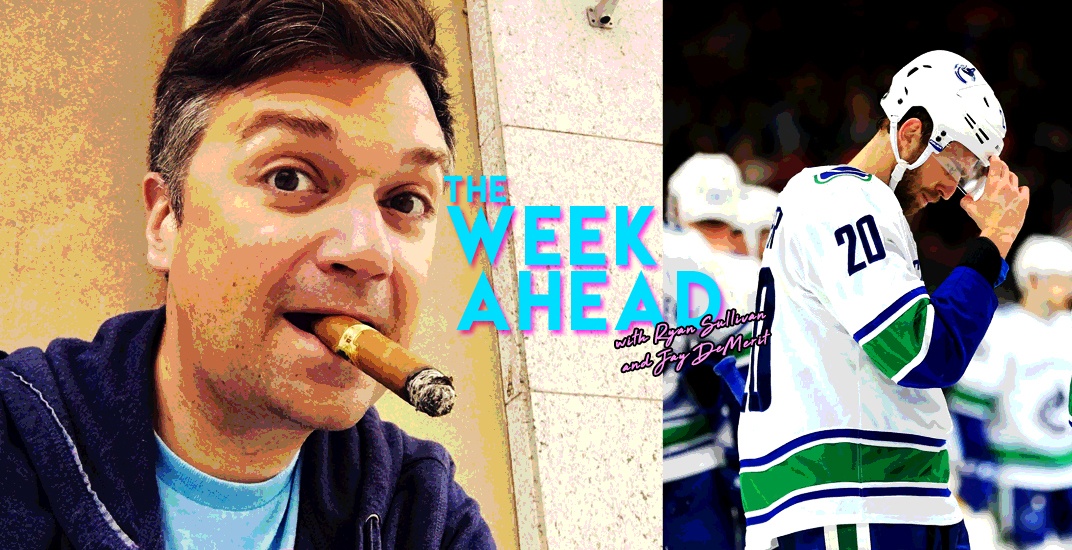 For the 25th episode of The Week Ahead, we welcomed Greg Wyshynski of ESPN.com to the show. Greg is perhaps better known for his days at Yahoo! as the Puck Daddy hockey blogger and he’s also spent some time with Rogers on the Marek vs. Wyshynski podcast. The bottom line, though, is he is an all around beauty!

This interview is of course brought to you by Burrard Physiotherapy and it was a gem and a half! You’ll notice the majority of guests we’ve had on our show have been stellar thus far and that trend didn’t stop for our quarter century episode.

Below you’ll find the visual version of our chat. Our Facebook Live feed goes out every Monday through the Green Men – Official Page.

Following our chat with Greg, we dove headfirst into our Indochino Headlines segment to crown ourselves in a tie for the ‘Jackass of the Week’ honours. We both picked Virginia last Monday (like millions of others) and were quickly disappointed in our brackets. We weren’t alone with our Jackassness crowning though…

We shared the nod with the BC government for denying the 2026 World Cup a spot to play in Vancouver. Jay and I both completely understand the shadiness of FIFA, but this is a once in a lifetime opportunity and quite honestly, I’d rather see my tax dollars go to this than more condos or bike lanes. Just my two cents!

Once we finished up our rants about the World Cup forfeiture, we chatted March Madness, NFL free agency and the upcoming NFL draft. With the Jets making moves, we put on our Cleveland Browns mock draft hats (because nobody actually owns a real one) and went at it.

Following the biggest topics of the week, we previewed all of the biggest games in The Week Ahead. Yes, it’s not just happening on this side of the pond either. The FA Cup is heating up with semis this week, while a little closer to home, the NHL and NBA are on their final season stretches as well.

You can find the podcast links below and that right there is yet another Week Ahead in the books! Thanks for checking us out and we hope you like this week’s show.

BTW, did you miss last week’s episode with NFL analyst Jabari Greer? No problem. Here it is!