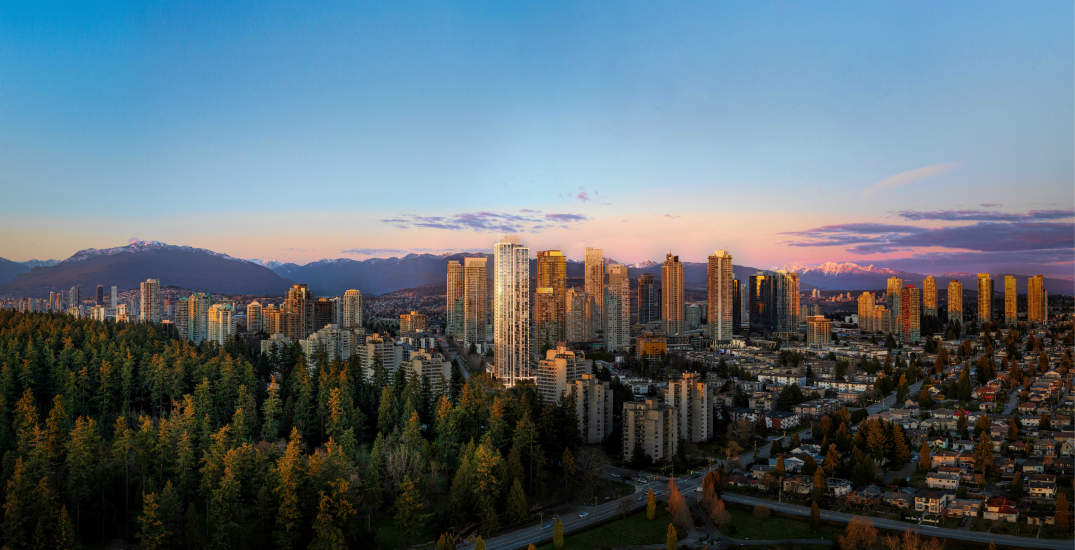 The bustling centre of Burnaby is showing no signs of slowing down in terms of infrastructure and developments, with Metrotown primed to become the next downtown of this Metro Vancouver city.

Earlier this year, the City of Burnaby announced plans to further enhance the area with a proposed events and convention centre, a project that would cost an estimated $460 million. Metrotown’s new residential area is growing, too, with Anthem launching one of the first new communities in the district: The Standard.

The Standard’s classic exterior exudes humble confidence and sophistication. “White linear lines extend towards the sky — as a beacon for the gateway of Metrotown along Willingdon — a striking presence and also a symbol of evolution and progress in the area,” Ivy Wu, senior sales manager at Anthem, tells Daily Hive. 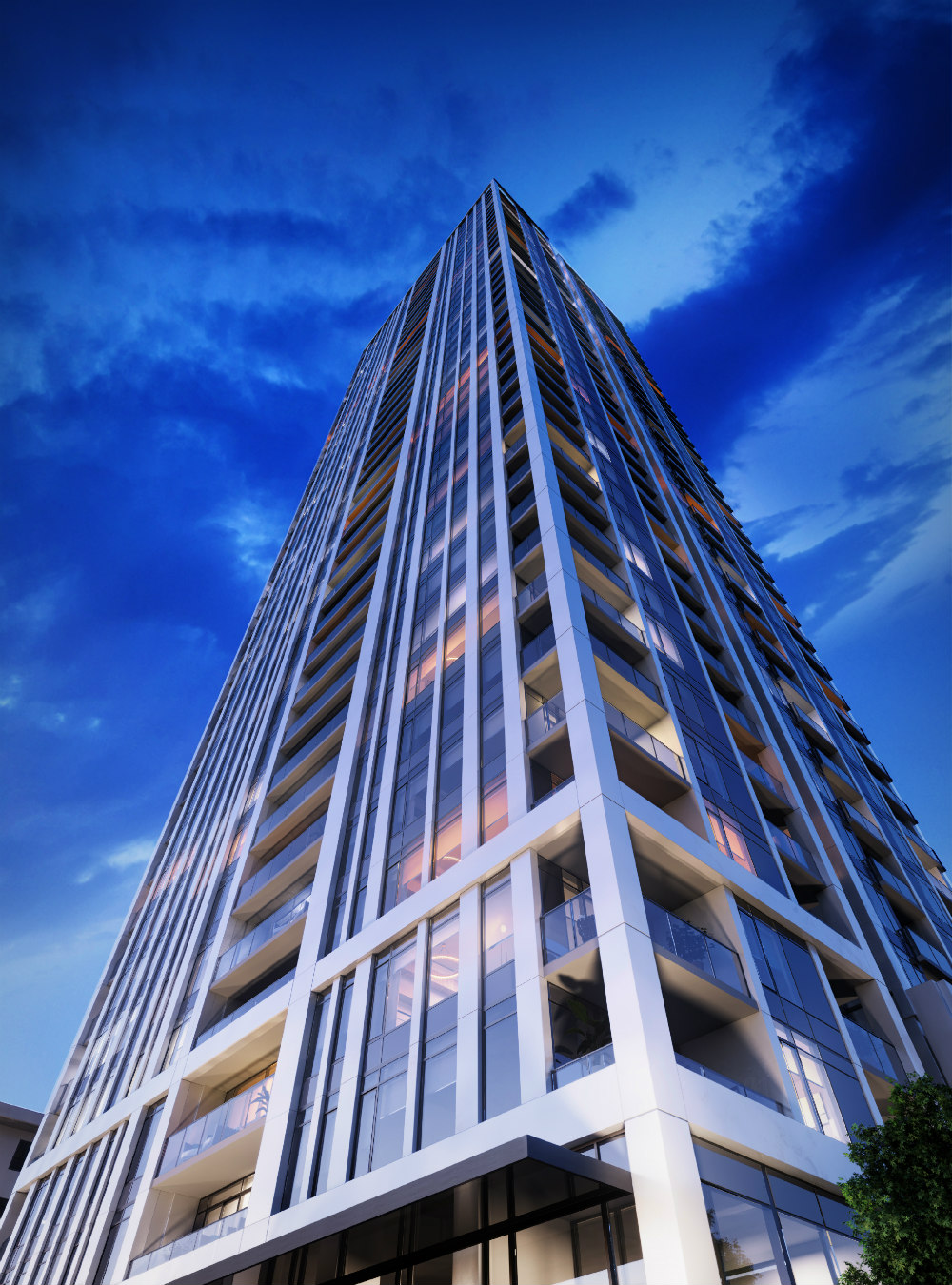 The location of The Standard connects urban vibrancy and nature, with natural pedestrian and cycling paths connecting to community retail conveniences. It’s a five-minute walk to Metrotown Station (suitable for residents who don’t wish to be right on the SkyTrain line but still reap its benefits), minutes from parks and schools, and offers access to routes that connect the city — without the congestion of Kingsway and other building construction.

“It is the perfect opportunity for sophisticated living in a prime location,” says Wu. Situated at the edge of nature and a 215-acre park, The Standard gives future residents access to natural walking paths, running trails, Swangard Stadium for events, an outdoor swimming pool, and numerous tennis courts, mini golf, and picnic areas.

Already, Burnaby is one of the greenest major cities in Canada, with 25% of its land dedicated to parks and conservation areas. Wu notes that people are appreciating both outdoor and personal space even more during the pandemic, and being at the edge of park space allows for that. “Maywood Park is also two minutes away, great for children, and is planned for expansion in the coming years.” 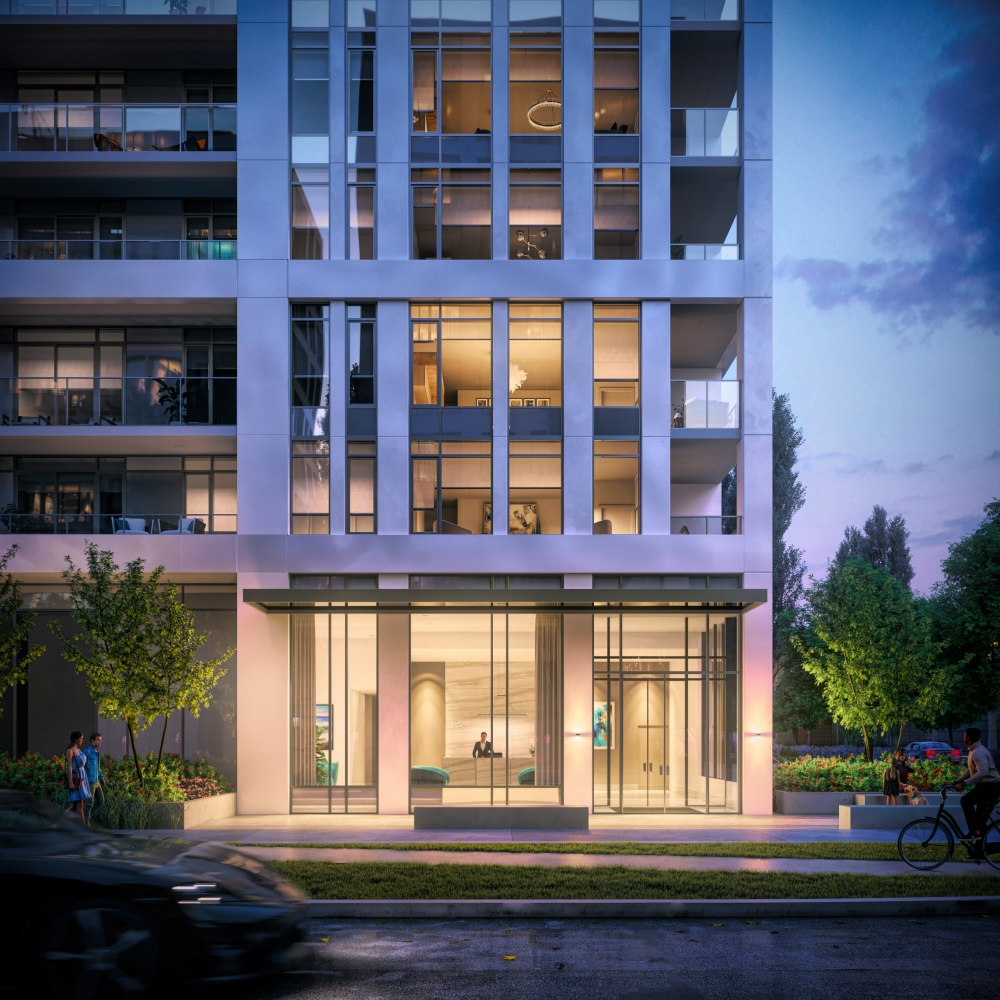 When asked how The Standard compares to other residential developments in Burnaby, Wu stresses that it’s not “a master plan site with a maze of towers and shared amenities.”

Instead, residents can expect “peace of mind — free from continuous construction congestion, noise, and pollution.” With its proximity to two large parks, The Standard’s view corridors are protected, which is a unique feature compared with other Metrotown projects, Wu explains.

Wu pays homage to Anthem and Beedie’s Station Square as “the most significant master plan community in Metrotown,” which has “elevated community planning on all levels, from [the] at-grade activations and conveniences of restaurant row [and] grocery stores to [the] shopping plaza to residential and commercial offices and shared workspaces.”

Continuing, Wu says Station Square has provided a cyclical environment and community where one can live, work, and play. “It has become an anchor location within Metrotown, and its success in urban planning [have] contributed and continue to contribute to the sustainable urbanization of Metrotown.” 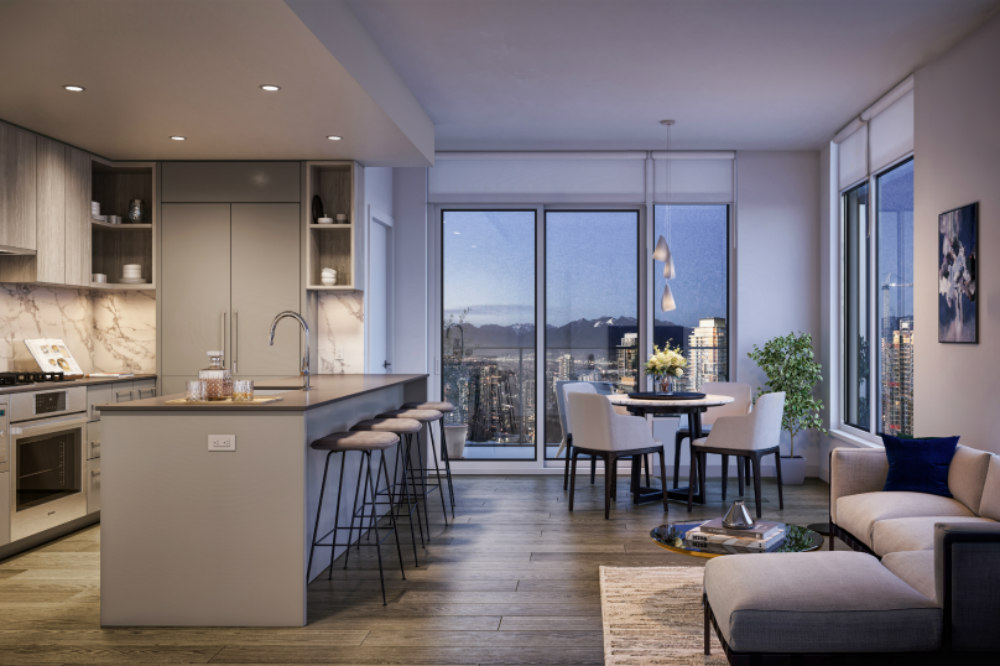 Interiors at The Standard are inspired by clean sophistication but also draw inspiration from Metrotown’s balance of vibrancy and nature, curated by the expert team at CHIL Interiors. Future residents can look forward to choosing from two designer colour palettes that offer calming reprieve to the energy of Metrotown.

Kitchens are generous in size, with most homes featuring kitchen islands, open shelving, and European-integrated Bosch appliances for a sleek, modern look. “A unique feature for The Standard is the large pantry space within the kitchen,” says Wu.

Homes on a higher level are meticulously designed to capture light with expansive windows and generous balconies to maximize outdoor living. Many of the two- and three-bedroom homes feature floor-to-ceiling windows in both the dining and living room areas to allow for natural light and fresh air.

“Homes are thoughtfully designed for maximum efficiency without compromising usability, with two-bedroom, two-bathroom homes from 762 sq ft and separated bedrooms for additional privacy.” 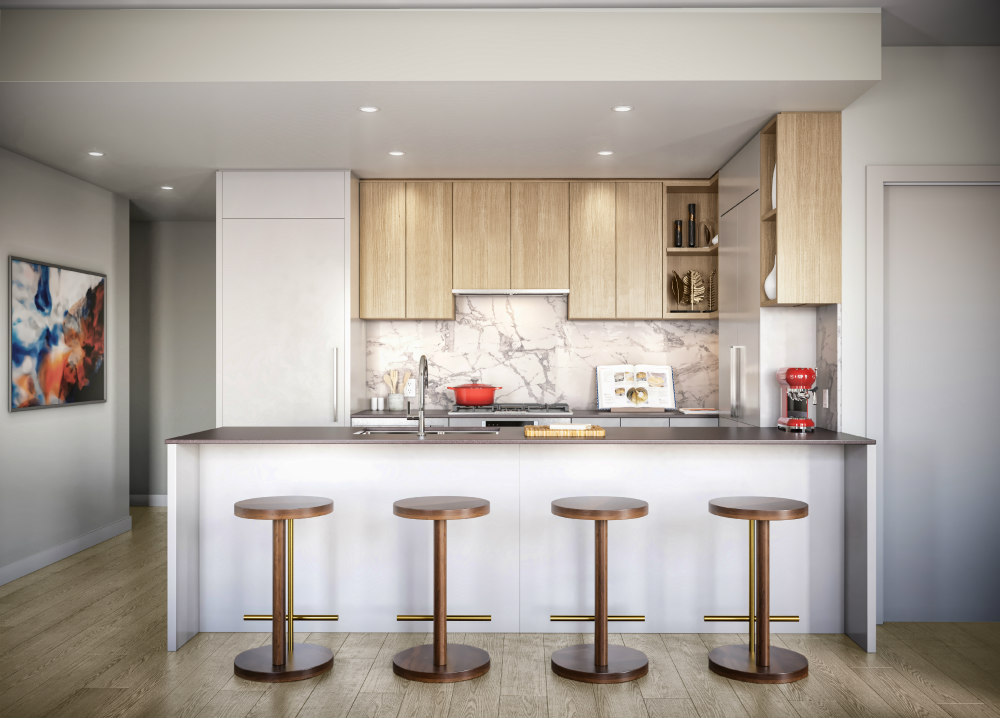 Beyond The Standard’s functional and well-designed plans, prospective residents can enjoy a rich offering of modern amenities known as Infinite at The Standard — covering 22,000 sq ft — curated for city living.

This extends to concierge services with cold storage, a co-working and study hall, a large gym complete with a sauna, a games room for billiards and poker nights, and multiple halls and lounges for entertaining. 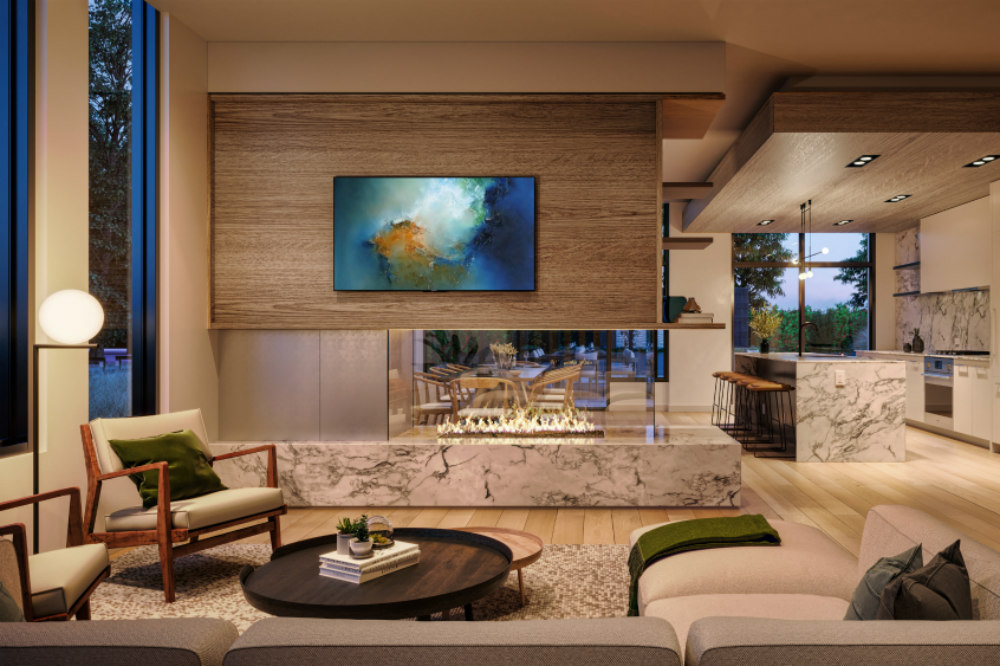 Outdoors, there are BBQ spaces and yoga gardens that maximize sunlight, along with a children’s playground and on-site pet wash station. The Standard also features a bike share program so residents can take advantage of nearby accessible cycling paths. 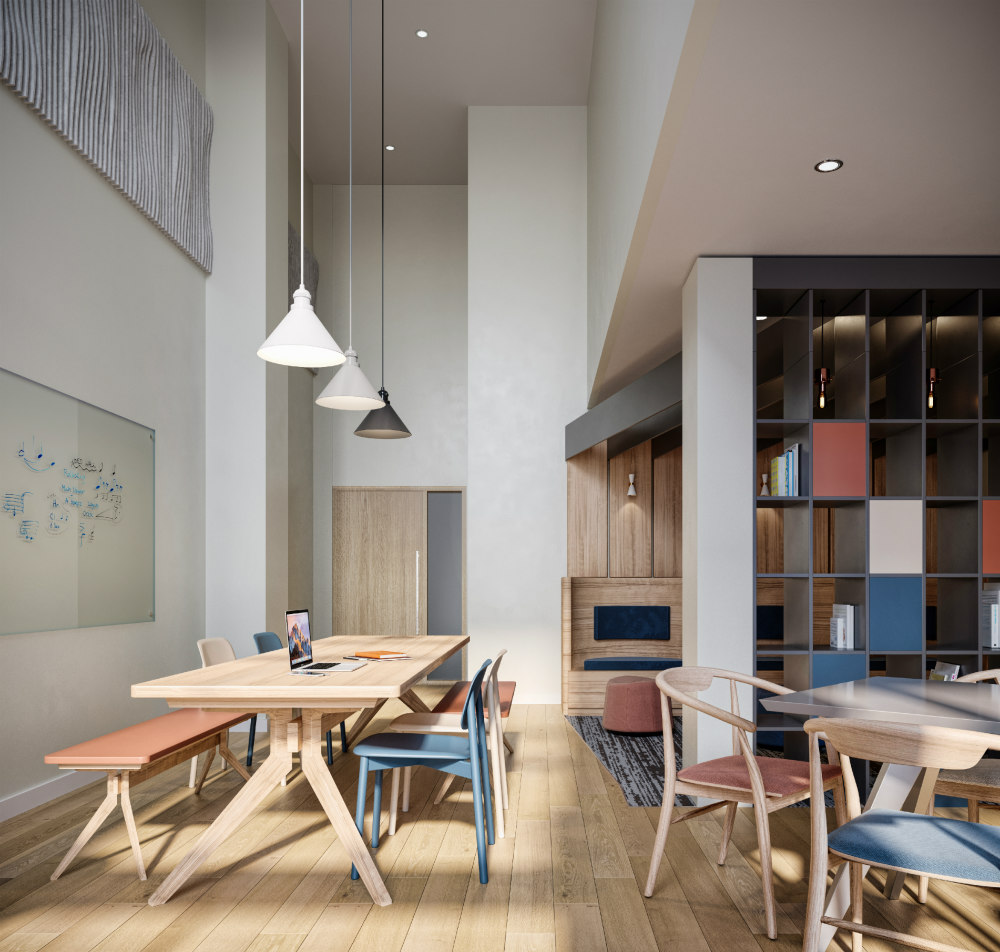 “From space programming to design aesthetics, The Standard will contribute to the greater community of Metrotown and serve as a beacon into the future and a gateway to downtown Burnaby,” adds Wu.

If you’re eager to see what life at The Standard could look like, visit thestandardbyanthem.com to register or request a private preview.