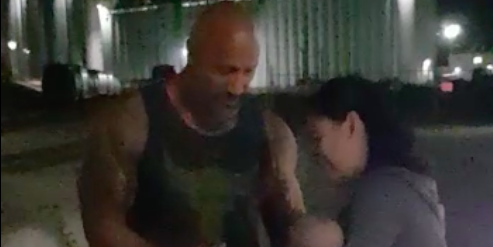 Dwayne “The Rock” Johnson has been filming in Vancouver for just over two weeks and has been accommodating his many fans.

On Friday night after wrapping filming at 1 am, Dwayne Johnson posted on his Instagram page that a group of fans had been waiting for him for hours. He joked with them he wasn’t going to stop but ended up coming back. A woman had been waiting there for five hours with her three-month-old baby and The Rock got out of his vehicle and posed for photos with the infant.

Skyscraper will continue filming in Vancouver until November.

✌🏾see ya next week. As much as I love messin’ with fans, they just laugh ’cause they know what the real deal. It”s not like it’s lunchtime and I’m shooting at the Four Seasons. Its 2am and these fans (some driving hundreds of miles) wait outside for hours in a crappy location just to meet me. Hey, there was a time in my early 20’s when I was broke and no one gave a shit who I was. That said, I’ll stop every time. Best part of my job. Grateful for the luv, now y’all go to bed dammit. 😉👊🏾

Best night of my life. He was worth the wait. He’s such a genuine and sweet person. He totally made my night 💕 and to top it off he asked to hold Maddox. ☺️💙 #therock

Finally 9 hours of waiting , it pays off to meet your childhood hero @therock

Finally. Meeting @therock was a rewarding (and electrifying) end to a looong, tough week Looking forward for what he has in store as #dccomics’ #blackadam Didn’t get the chance to raise an eyebrow together — #vscocam #vscofilter #therock #peopleschamp #dwaynejohnson