The Cambie Hotel in 1985 / Forbidden Vancouver

The Cambie Pub is one of Vancouver’s consistently popular watering holes and for many years a favourite stop on the Forbidden Vancouver Tour.

After news that plans to shut down in November were scuttled (hooray!), we decided to take a look back at the Cambie’s century-plus history in the city. 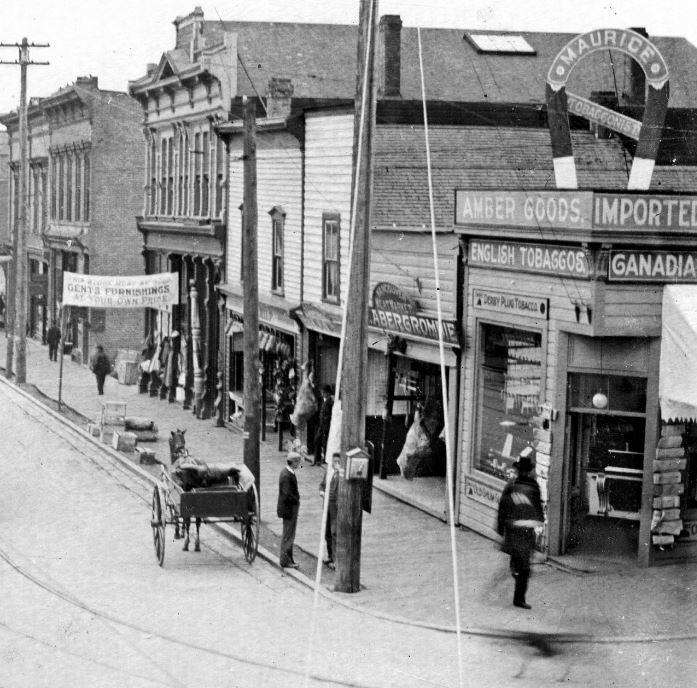 The building on the southeast corner of Cambie and Cordova streets went up in 1899. It was one of the earliest local designs by architect JE Parr of Parr & Fee, who went on to make their name with landmarks such as the Vancouver Block on Granville and Gastown’s Hotel Europe. 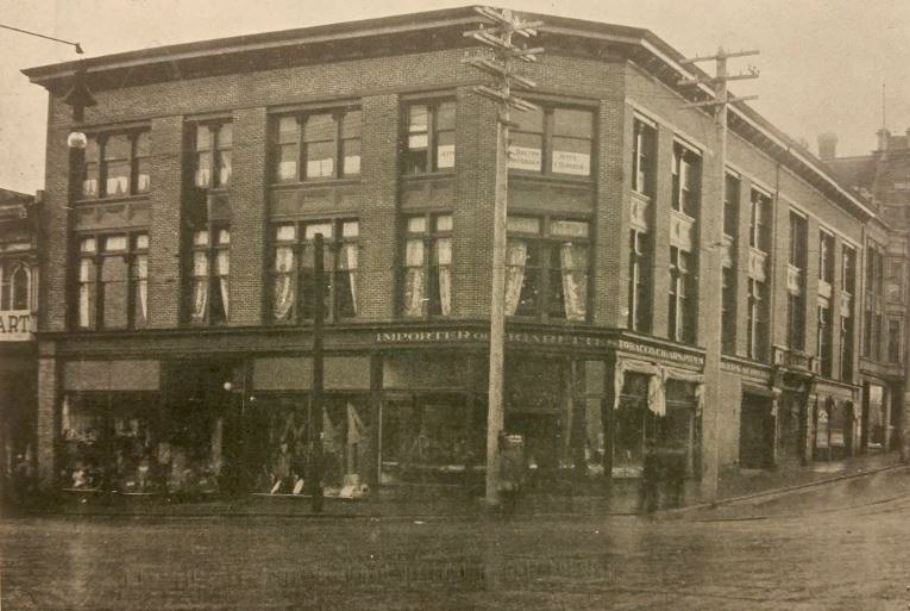 The McDowell, Atkins, Watson, & Co.’s new building. From Vancouver of To-day Architecturally by Parr and Fee, 1900. 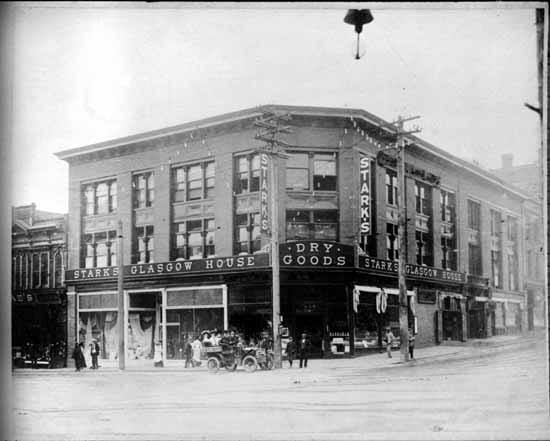 By 1908, city directory listings for the upstairs show that the office spaces were becoming living spaces and named the address as the Henderson Block in 1909 and the Carlton Hotel the following year. 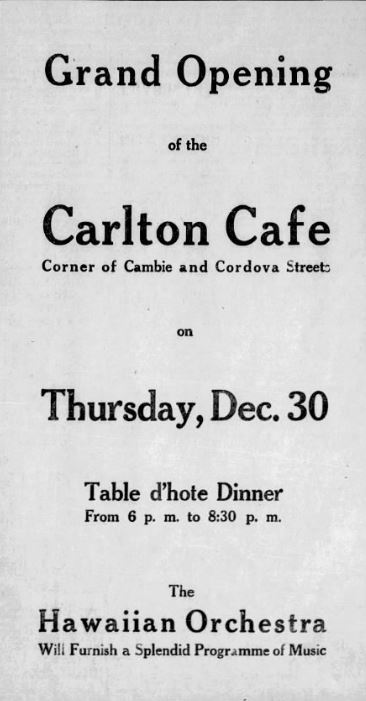 With the Carlton Hotel came the Carlton Cafe, a fine dining restaurant in what’s now the Cambie Bar. It’s grand opening was on December 30th, 1909, and featured The Hawaiian Orchestra. 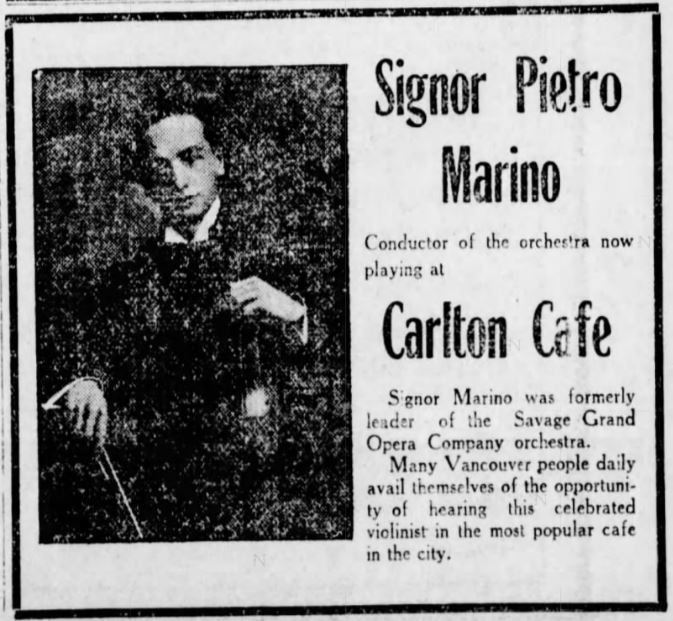 The Carlton changed hands in early 1913, and by March the following year, its decline was evident. Responding to complaints, City inspectors visited the cafe several times “and had been accosted by women each time,” according to the licence inspector. The City gave the Carlton 30 days to clear out because, as Mayor Baxter explained, the licensing board “will not tolerate the ‘raw stuff.’”

A week before it closed, another “raw” incident at the Carlton made the papers. A brawl broke out after three women befriended and then stiffed three Finnish labourers for $11 worth of champagne. The women left and the dispute over the bill left one man unconscious.

An ad for the boozeless Carlton Cafe rebranded as the Carlton Grill. Sun, 7 April 1922.

The Carlton Hotel continued to operate without the cafe until early 1918, when alcohol prohibition was in full swing. Prohibition ended in 1921, but beer parlour licences weren’t made available until 1925, and the Carlton was part of the first wave to apply for one.

In contrast to the original cafe, the Carlton beer parlour was a rough-and-tumble place. It’s licence was suspended in 1930, though the length or reason for the suspension wasn’t reported. The operator of the hotel upstairs survived having his throat slashed in 1935, and in 1937 a woman sued the beer parlour after the owner violently threw her out, leaving her bloodied and with a broken arm. 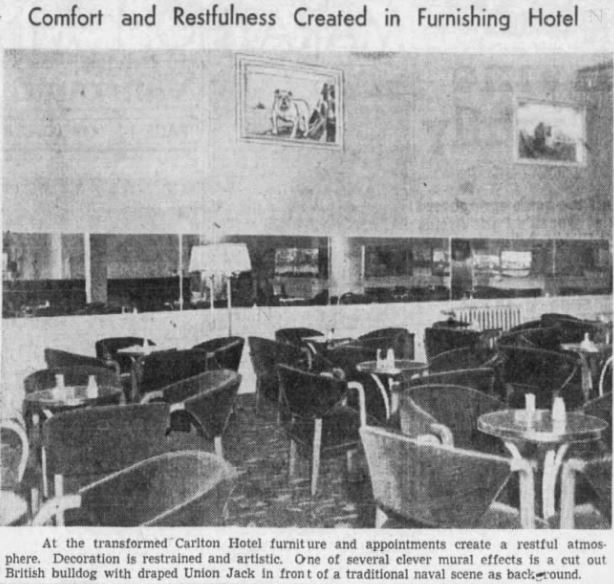 The interior of the Carlton after a major renovation. Sun, 16 September 1941.

The Carlton beer parlour was renovated in 1941 and appears to have been less raucous under the new management. In 1953, the provincial government took the radical step of allowing food to be served in beer parlours and customers to order more than one drink at a time. Even that failed to corrupt the Carlton. 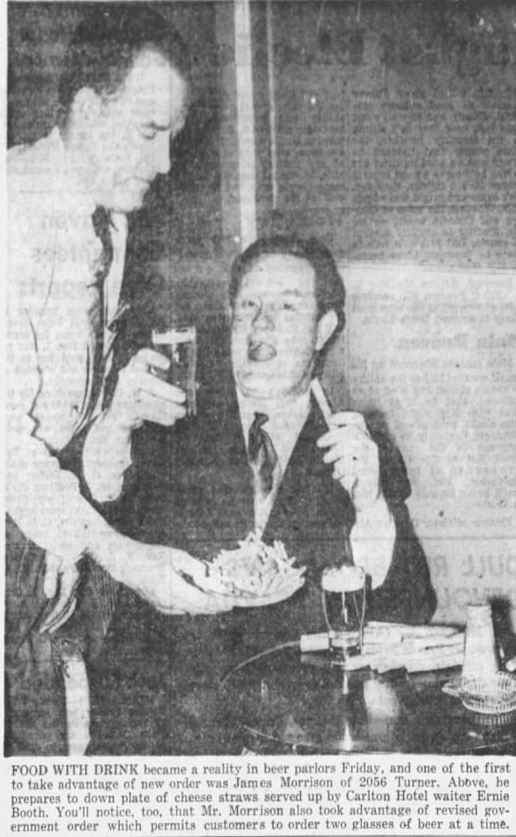 But by the 1970s, the Carlton had become a dive bar and the upstairs a true slum. One incident illustrates how bad it had become. After being refused service for being drunk, a disgruntled patron tried to attack a waiter with a broken glass. The waiter threw him out, but the inebriate returned with an axe and smashed the windows of the bar. The Province reported that about 40 people – “mainly bikers, but a few straight people too,” including bar staff and at least two women – chased the axe-wielder and beat him unconscious. 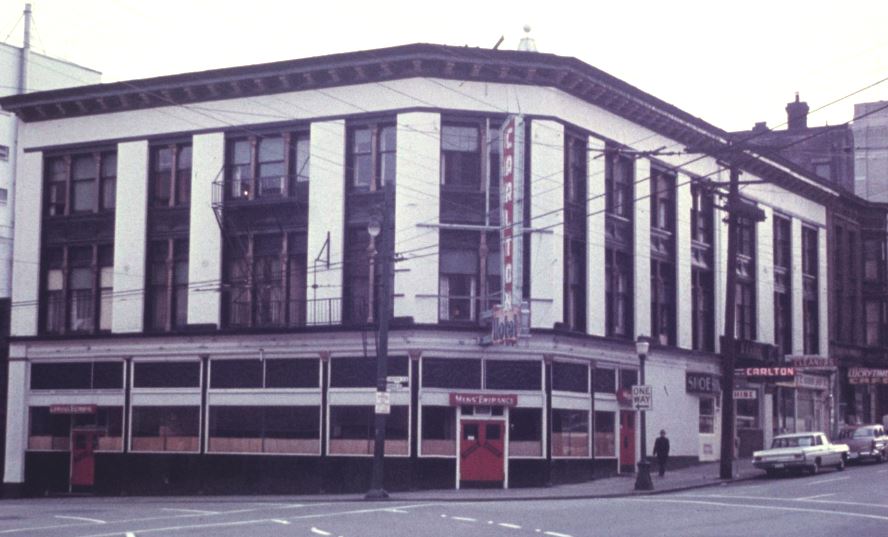 The City finally took action in 1977 when the Health Department ordered the owner to relocate the tenants to his other hotel, the Balmoral, and renovate the Carlton to bring it up to standard. As a condition of its licence, the bar could not operate without a functioning rooming house. Since the bar generated the bulk of the owner’s profit, this was a powerful enforcement incentive. 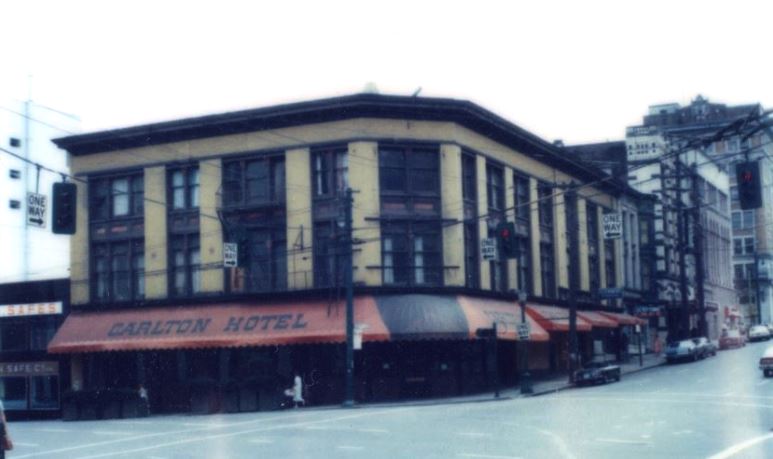 The secretary of the Downtown Eastside Residents Association frustrated the enforcement order by persuading the tenants to stay put. DERA eventually apologized for this tactic, and the City finally succeeded in closing the Carlton Hotel in 1979. 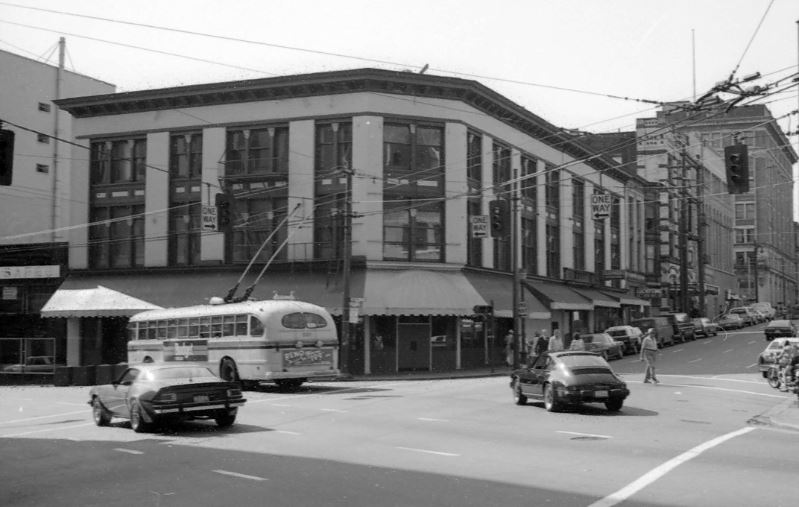 The Carlton sat empty for years. A new owner began renovations in 1981, and applied for two 125-seat pub licences for the large bar space. The licensing board was willing to consider one pub licence, but City Council initially rejected both. While disorder in the Downtown Eastside is associated with street drugs today, back then the main concern was alcohol, and City Hall was trying to reduce the number of bars in the neighbourhood, not increase it. 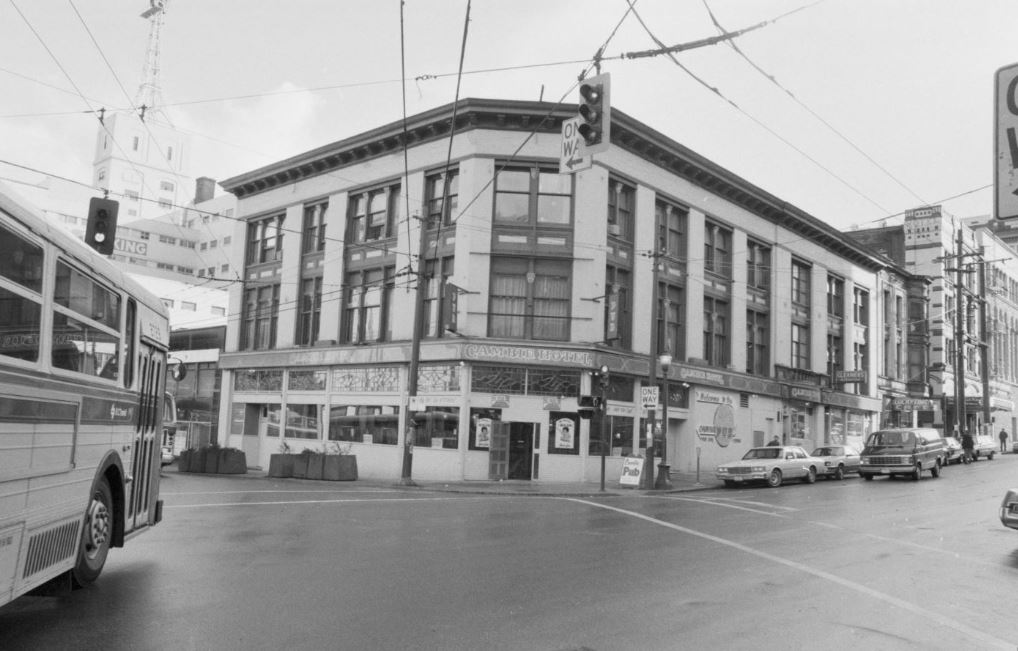 After a brief spell as an Italian restaurant called “Mama’s Own,” the Cambie Hotel pub finally opened in 1983 with its restaurant licence combined with a pub licence (hence the weird fence dividing the space until recently). This makes the current establishment 36 years old, not the 122 claimed on the Cambie Pub website (in a building that will only turn 120 this fall!). The mistake may be from the unrelated Cambie Hotel that operated for decades in a building designed in 1897 and that now houses Starbucks and Black Frog Eatery at the northern foot of Cambie Street. 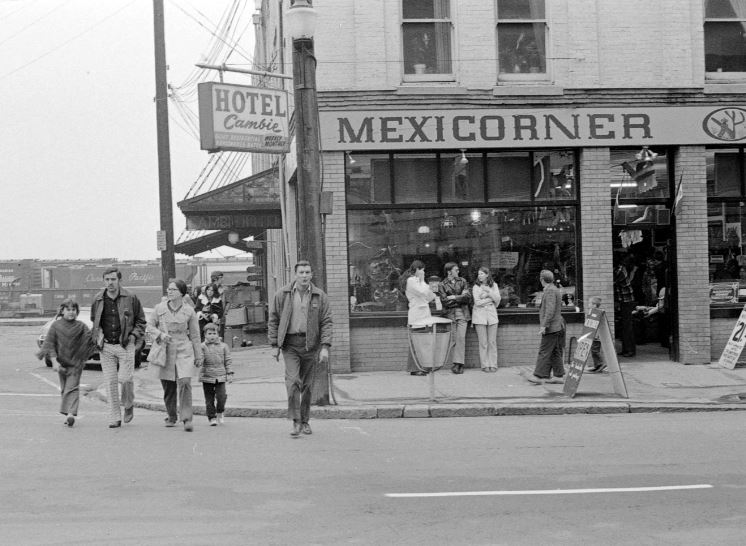 The original Cambie Hotel on the northeast corner of Water and Cambie streets in the early 1970s. Photo by Ernie Fladell, City of Vancouver Archives #69-26.02.

Like the Carlton before it, the Cambie has generated its share of controversy. In 1990, the owner unsuccessfully tried to sue the City, claiming that the Standard of Maintenance bylaw governing the rooming house upstairs was unfair to Single Room Occupancy hotel owners. 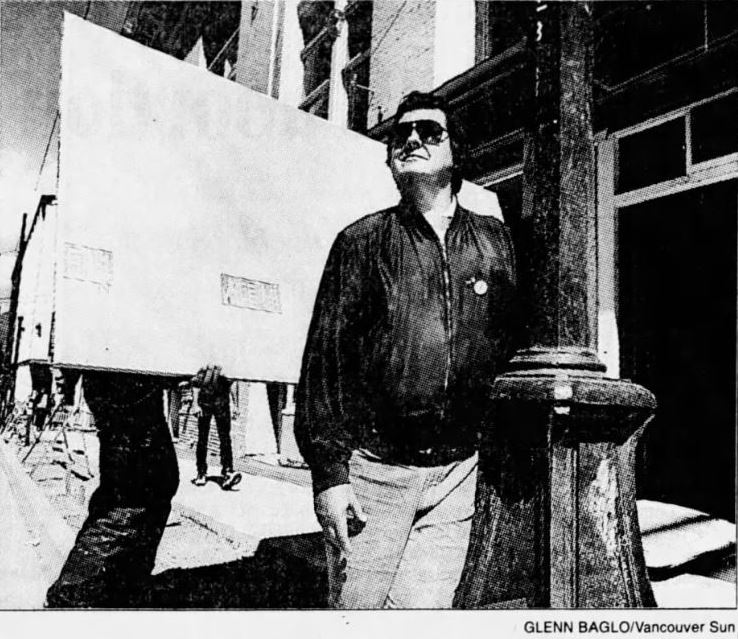 Tony Williams was one of the Cambie residents displaced when it converted to a hostel for tourists. He told a reporter that he’s seen “the ousting of old-timers to make way for tourists before,” referring to Expo 86. Behind him, a worker is carrying in renovation materials. Sun, 19 May 1995.

Its licence was again suspended in the early 1990s for reasons unknown. In 1995, the owner converted the Cambie from a hotel to a hostel, displacing longtime local renters in favour of tourists paying 300% more in rent. 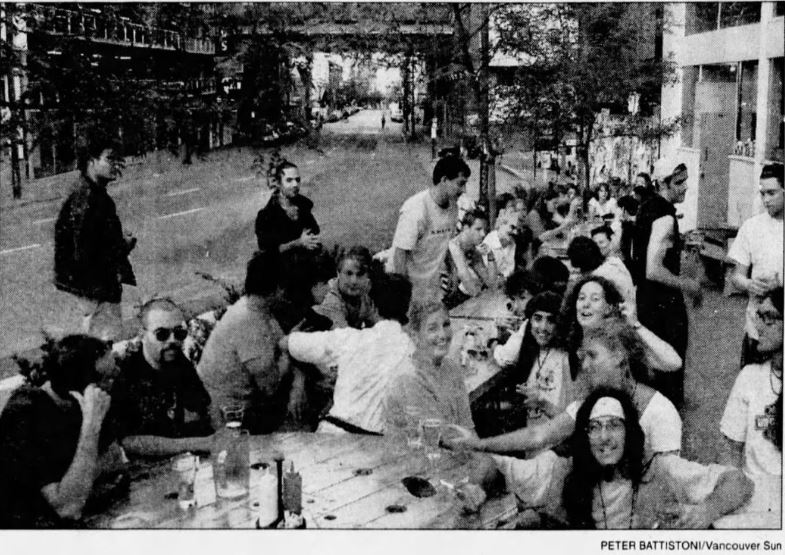 The announcement that the Cambie was sold and would cease operations in the fall of 2019 was lamented as the end of an era by most media outlets. But the building itself is protected by the City as a “Heritage B” site and has had many owners, multiple licence suspensions, several renovations, and has languished unoccupied for extended periods since 1899. 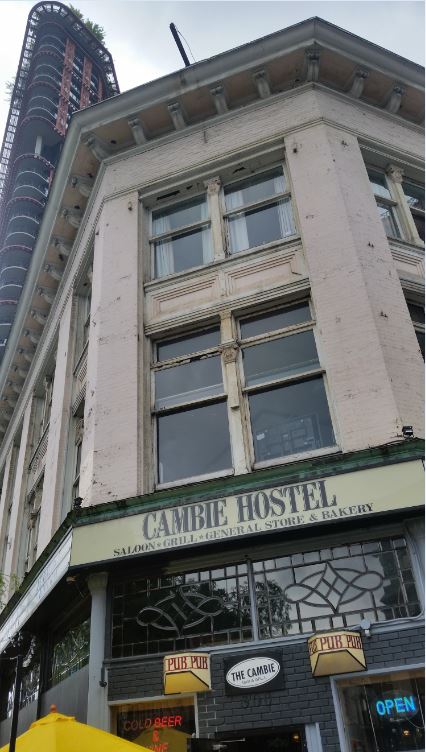 Moreover, to the chagrin of anti-gentrification activists, new owner Steven Lippman has been buying up Downtown Eastside SROs, spiffing them up, opening street-level bars and restaurants, renovicting occupants, and jacking up the rents for years now. To this writer, the news is the continuation, not the end, of business as usual on the southeast corner of Cambie and Cordova, considering its history thus far.