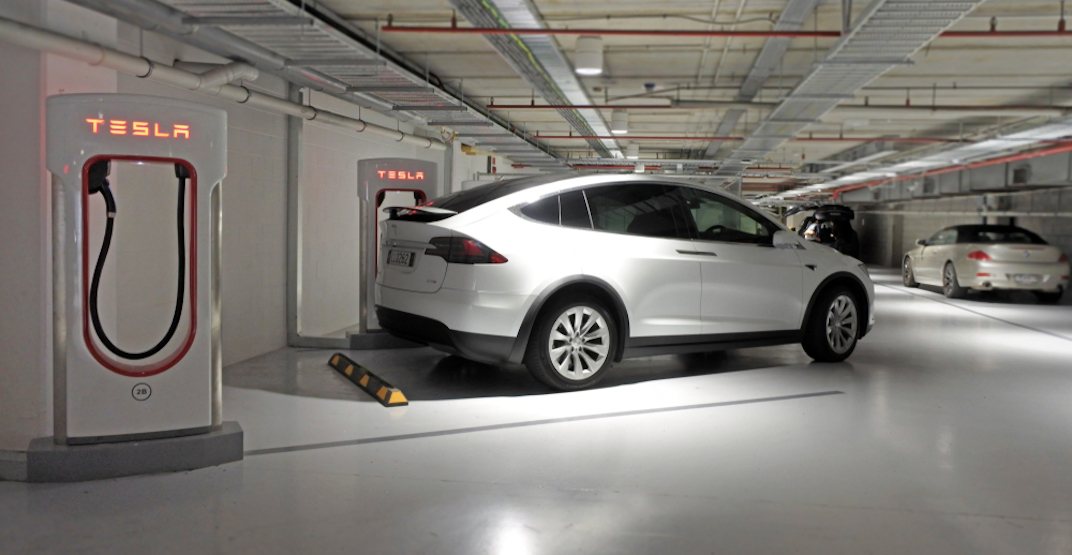 The rapid electric-battery vehicle charging station is located on the southwest wall of Level P2 in the shopping mall’s underground parking — just under Nordstrom. There are 22 vehicle parking stalls outfitted with the Supercharger equipment.

“At Pacific Centre, we had a great opportunity to utilize existing electrical infrastructure to support the goal of EV adoption in the City of Vancouver,” said Chris Fontaine, the project manager at AES Engineering, which designed and engineered the charging station.

“We’re all excited for the efforts which continue to be made towards reducing our carbon footprint and increasing sustainability. A few years ago, you would notice an electric vehicle maybe once a week. Today, it is difficult to go for a 10-minute walk in the downtown core without seeing at least three or four electric vehicles. The progress is undeniable.”

This charging station became operational late last week and it is already seeing “a significant amount of interest from the public,” according to a release.

Changing consumer trends partially fuelled by government policies and incentives have greatly contributed to the growing share of electric-battery vehicles in BC.

A number of fast electric charging stations have recently been installed across the province, including infrastructure owned and operated by BC Hydro.

Last year, following the City of Richmond’s foosteps, the City of Vancouver mandated all new multi-unit residential buildings to install charging stations for every parking stall beginning at the start of 2019.

And just last fall, the provincial government set a 100% zero-emission vehicle sales target for all new light-duty car and truck sales by 2040. This will be largely accomplished by electric-battery vehicles.

The growth in electric vehicles will continue to be exponential over the coming years, based on recent market forecasts by Simon Fraser University’s (SFU) Energy and Materials Research Group.