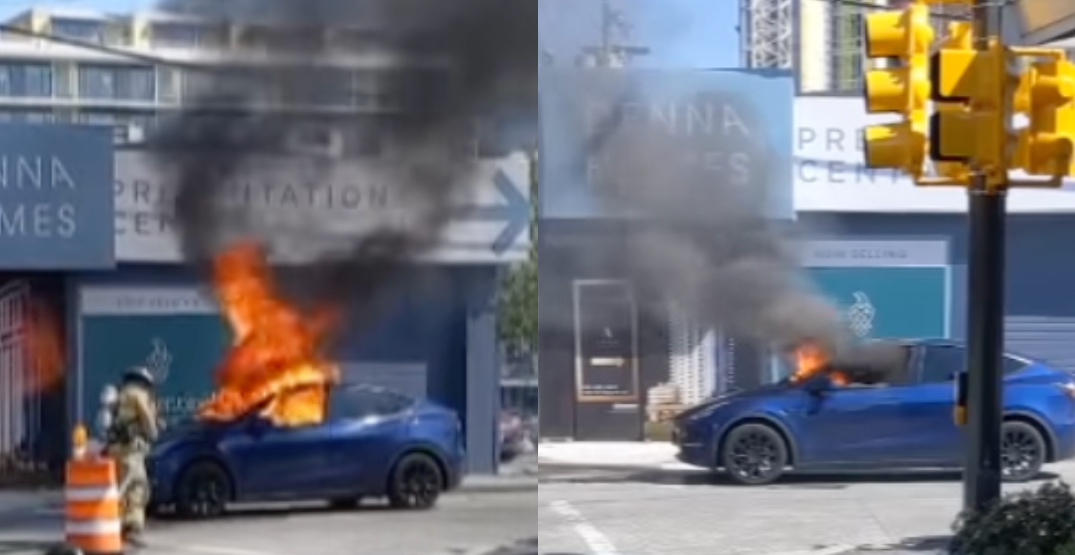 A Tesla that shut down and caught fire moments before the driver kicked out a window to escape in North Vancouver has been secured by Transport Canada.

Now, the agency will investigate what happened and will look at the origins of the fire in cooperation with the electric car manufacturer.

“The safety of all drivers, passengers, and road users is a priority for Transport Canada,” said a rep in a statement to Daily Hive.

“The department was informed of this incident early in the morning on May 23, 2022, and had its contracted collision and defect investigation team based in Vancouver, BC, locate and secure the vehicle,” said the rep.

Daily Hive first reported about the Tesla fire on May 22, and the incident occurred on May 20.

Transport Canada has also notified Tesla about the incident and has “made arrangements for a joint inspection of the vehicle in an effort to determine the cause of the fire.”

Fire Chief Brian Hutchinson from the District of North Vancouver Fire & Rescue Services told Daily Hive that on the morning of May 20, they responded to a call of a Tesla Model Y that caught on fire at the intersection of Hunter Street and Mountain Highway near the Iron Workers Memorial Bridge.

“The driver… had difficulties exiting the vehicle and was forced to kick the driver’s side window out,” said Chief Hutchinson.

“There is a manual release, but in the heat of the incident, that wasn’t intuitive to him and he kicked the window out and was able to escape and within a couple of minutes the vehicle did become fully engulfed in fire.”

Crews arrived on the scene within minutes and put out the fire partly with special fire blankets – a technology suited to electrical vehicle fires.

In a video of the fire, you can hear the driver of the vehicle explain what happened.

“I kicked through the window because everything stopped. The power didn’t work, the door didn’t open, the windows didn’t go down… I need to get the f**k out of this car,” the driver said. “This is 2021. Brand new, man.”

Daily Hive has reached out to Tesla for a statement and will update this story.