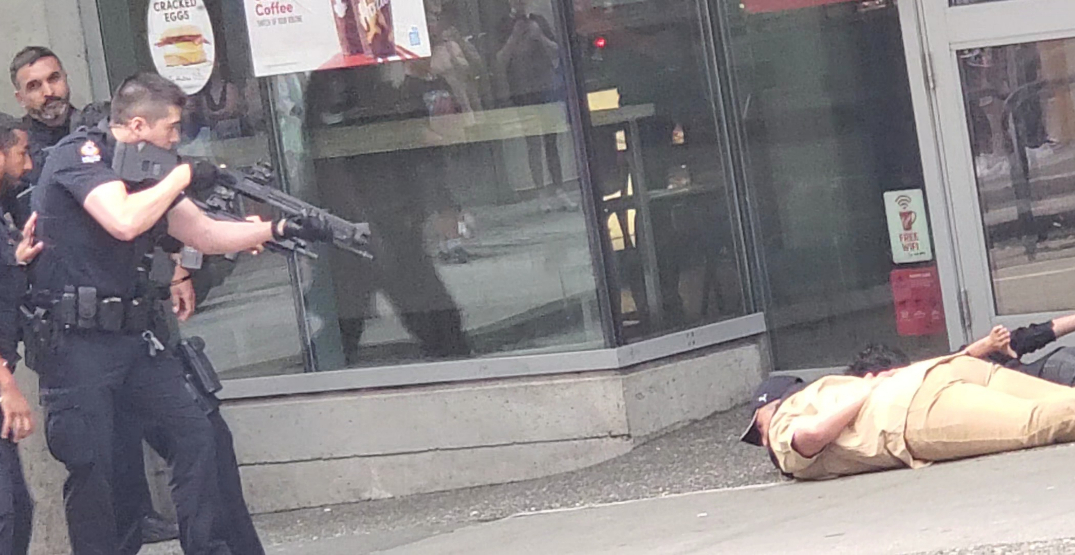 Two teens were arrested at gunpoint after a terrifying incident involving what turned out to be imitation weapons in downtown Vancouver on the weekend.

A video that was shared via Twitter caught a dramatic altercation between a group of teens and Vancouver police officers on camera outside of a Tim Hortons after a report that two men had a gun.

The VPD told Daily Hive that the incident transpired because staff at the Tim Hortons on Dunsmuir and Seymour called the police to report their discovery.

The incident took place on Saturday around 5:30 pm. Staff reported that the teens were pointing a gun at the people they were sitting with inside of the Vancouver Tim Hortons.

The ammunition for cap guns are usually percussion caps made with plastic which make a loud noise and sometimes a little smoke.

The teens were released to their parents following the investigation.

A video posted to Twitter shows what happened. Keep in mind that the non-video contents of the following tweet are disputed by the information provided by Vancouver police.

#Vancouver #Police negligence along with Tim Hortons, #Cops falsely called over a toy cap gun, two kids unlawfully arrested at gunpoint by police heavily armed with what looked to be semi- automatic weapons.

The kids were fine and released but they could have been hurt or worse. pic.twitter.com/SV6nLs9CVC

Calls that involve weapons prompt a heightened police response for both public and officer safety, said RCMP Inspector Neil Kennedy in a statement.

Imitation firearms can pose significant problems as it can be difficult for the public and police officers to distinguish the difference between real and imitation until proven otherwise.