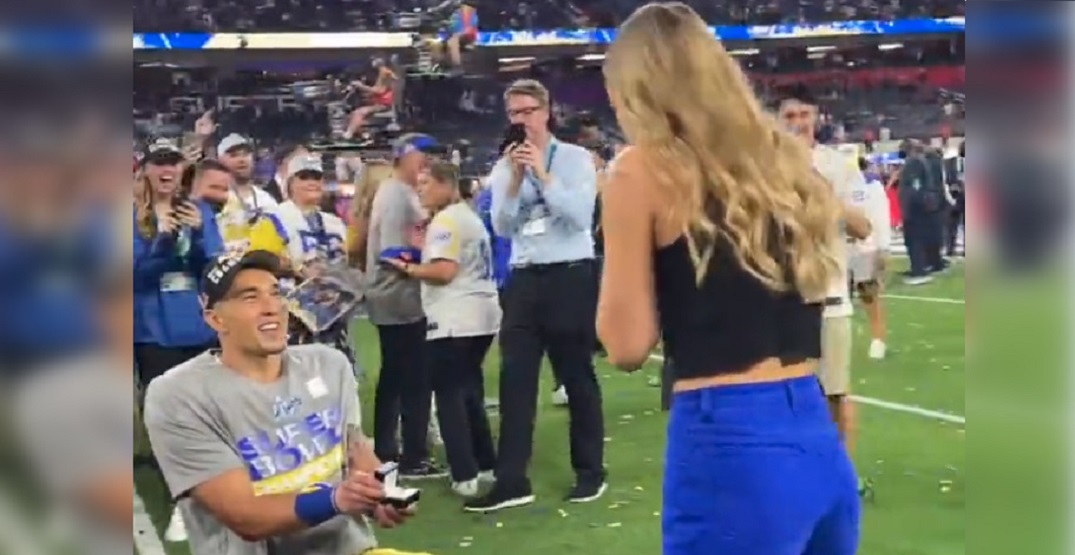 On the night the Los Angeles Rams won the Super Bowl at home, one player had a little something extra to celebrate.

Just moments after the Rams defeated the Bengals by a 23-20 score in Super Bowl LVI, Los Angeles defensive back Taylor Rapp pulled out a ring for his longtime girlfriend Dani Johnson.

MORE THAN ONE RING TONIGHT!!

With Valentine’s Day officially beginning after midnight, it’s looking like a great timing on the engagement for the happy couple.

A 2019 second-round draft pick out of the University of Washington, Rapp has spent his entire NFL career with the Rams organization.

Rams receiver Cooper Kupp and defensive lineman Aaron Donald may have grabbed the major headlines for their performances, but Rapp’s showing on Sunday shouldn’t be sniffed at, either.

Rapp had missed the first three games of the playoffs due to a concussion, but made a big impact on Sunday, recording four solo tackles and seven total tackles.

With Los Angeles picking up the Rams’ first Super Bowl win since 2000 when the team was based in St. Louis, there’s little doubting the strength of the team.  But there is one question that’ll probably remain unanswered forever — what the heck was Rapp’s plan if the team  lost?

Ah, it’s probably best if we never know. Cheers to Taylor and Dany!