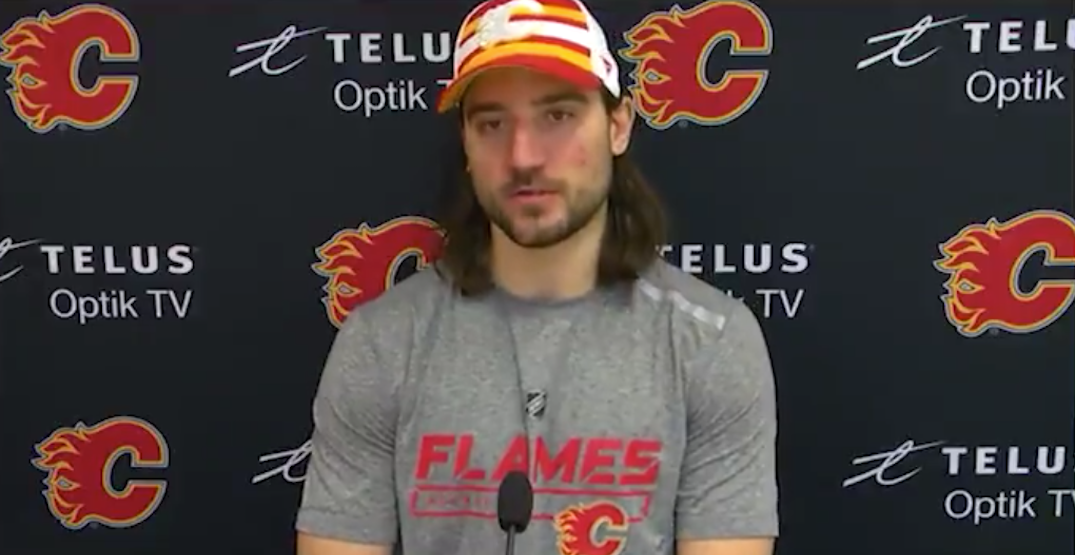 Yes, it still doesn’t look right seeing Chris Tanev in Calgary Flames colours, but get used to it.

A warrior on the Canucks blue line for 514 games, which ranks 24th all-time in franchise history, Tanev signed a four-year contract with Calgary in free agency. And because of this unusual year, Tanev will face his former team a whopping 10 times this season, beginning this weekend.

The Canucks and Flames will play each other Saturday and Monday at the Saddledome in Calgary. With the Flames adding three regulars to their lineup from Vancouver this offseason, and the Canucks countering by signing Travis Hamonic, there’s certainly added intrigue in this matchup.

“I love all those guys,” Tanev told reporters today. “Played with a lot of those guys for a long time and tomorrow is going to be a competitive game.”

While these games will be meaningful for Jacob Markstrom, and to a lesser degree, Josh Leivo, no player bled blue and green more than Tanev for the last decade. Markstrom and Leivo have experience playing former teams, but this is new for Tanev, who has joined just the second team of his career.

“It’s going to be different… I’m sure I’ll have every emotion going. I’ll be excited, nervous, anxious, but it’ll be a fun night.”

Known affectionately by some of his Canucks teammates as “dad,” Tanev still has a lot of love for his former team.

“We talk all the time… I have a lot of really great relationships with a lot of guys on that team, players and staff members as well, you’re always keeping in touch and keeping tabs on each other and obviously you wish the best for everyone.

“It’ll be different playing against them tomorrow. It might be a little emotional but I definitely want to win… I’m definitely going to be excited as well.”

Tanev and Hamonic traded places over the offseason, right down to their defence partners. Tanev now finds himself with Noah Hanifin, Hamonic’s partner last season, while Hamonic plays alongside Quinn Hughes.

Tanev played over 20 minutes in his first game with the Flames, and picked up an assist. That game also featured a save-of-the-year candidate from Jacob Markstrom.

Unfortunately for Calgary, they lost the game 4-3 in overtime to the Winnipeg Jets. They’ll be hungry for a win against the Canucks, who will look for redemption after a lacklustre performance in Edmonton.