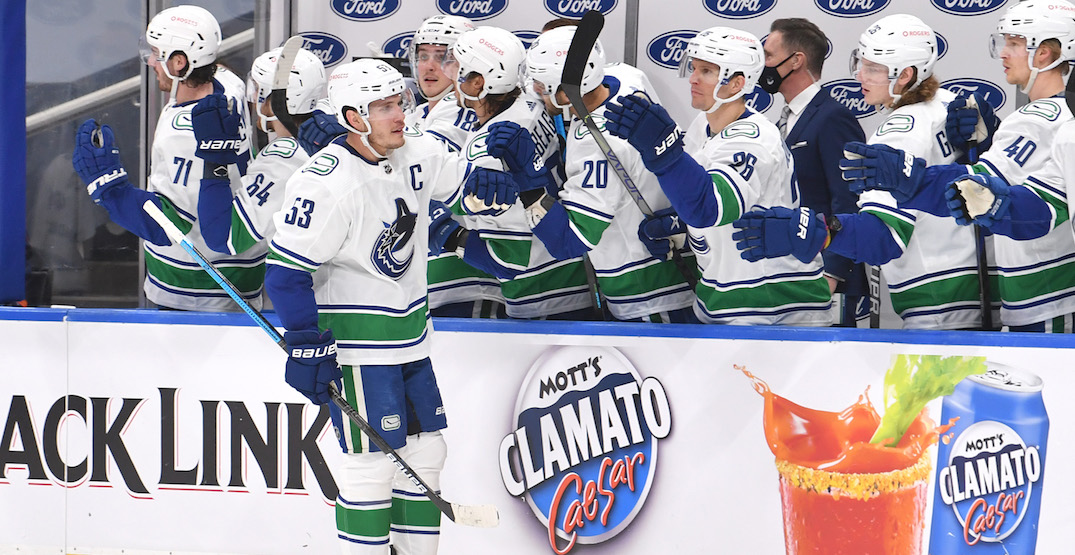 Connor McDavid just scored another goal but John Shorthouse hasn’t announced it yet.

Just kidding, but that’s what Thursday’s loss must have felt like for Canucks fans watching on television — the first regular season loss by Vancouver in 312 days.

Here’s what we’ve learned about the Canucks after just two games this season.

1. Team defence is still an issue

Jacob Markstrom was named the Canucks’ MVP in each of the last two seasons. You don’t typically get that award as a goalie if your team plays stingy defence in front of you.

Well, Markstrom’s in Calgary now, so the Canucks would be well served by improving their play in front of Braden Holtby and Thatcher Demko.

The Canucks gave up the fourth-most shots per game in the NHL during the regular season last year (33.3) and the third-most shots against, among teams in the postseason (36.7).

Leaky team defence was once again an issue for the Canucks on Thursday, as they gave up a whopping 46 shots on goal.

Nate Schmidt wasn’t here last year, and this isn’t something he’s used to.

“I actually leaned over to Braden Holtby at the end of the game and I was like ‘I can’t remember seeing this many shots in the game, in any recent memory of mine,'” Schmidt said after the game.

Miscommunication by #Canucks on the 4th Oilers goal. Hughes is out of the box, and thus acting as a winger. Hamonic chases his man to the point and is slow getting back.

Looked like Hamonic thought Hughes was covering him and Hughes thought Hamonic was coming back. pic.twitter.com/x58PwLZZwb

The Canucks’ defence has three newcomers — one on each pairing — so perhaps that’s part of the problem. But this is an area the team needs to improve in, and that includes the forwards as well.

He already has a goal, but that only tells part of the story for rookie Nils Hoglander, who has passed his first two tests with flying colours.

Hoglander clearing some space for himself in front pic.twitter.com/hSr3jXYK0S

Hoglander isn’t getting muscled off the puck, and he’s playing with confidence. The 20-year-old looks like he belongs, which is really saying something given he’s playing over 19 minutes a night so far — more than any other Canucks forwards not named Elias Pettersson or Bo Horvat.

Horvat’s line has been Vancouver’s best at five-on-five, and that’s a credit (in part) to Hoglander.

Despite the departure of Tyler Toffoli, Jake Virtanen didn’t get a sniff of a top six spot in training camp. But Virtanen couldn’t have asked for a better opportunity in the first two games, as he was elevated up the lineup, playing with Pettersson and Brock Boeser.

The opportunity is there, once again, for Virtanen to prove that he can be a top six forward, and yet he has just three shots on goal through two games and has been largely ineffective.

He’s 24 years old now and has nearly 300 games of NHL experience. There should be no more talk of “figuring it out.” We’re only two games into the season, so we’ll reserve judgement for now, but this is a “show me” season for Virtanen.

He scored 18 goals last year but was a healthy scratch to start the postseason. Can he succeed in a top six role, and do it consistently? So far, the answer is no.

With two goals in the season-opener, Brock Boeser signalled his resurgence.

“I feel like my shot’s back where it was in my first year,” Boeser said, adding that the back injury he suffered in his rookie year was giving him problems the last two seasons.

Boeser only had one shot on goal in the second game, which isn’t good enough, but there’s no denying the zip he got on his second goal Wednesday.

The shot is back, he just needs to use it more often.

Various editions of the Canucks’ fourth line have been much maligned over the years, so how about some kudos?

The trio of Jay Beagle, Brandon Sutter, and Tyler Motte has been — dare I say it — pretty good so far. The trio even produced a goal on Thursday, with Motte scoring on a deflection from a Travis Hamonic point shot.

Shot attempts were 10-1 for the Canucks when Beagle, Sutter, and Motte were on the ice on Thursday, and 12-7 on Wednesday.