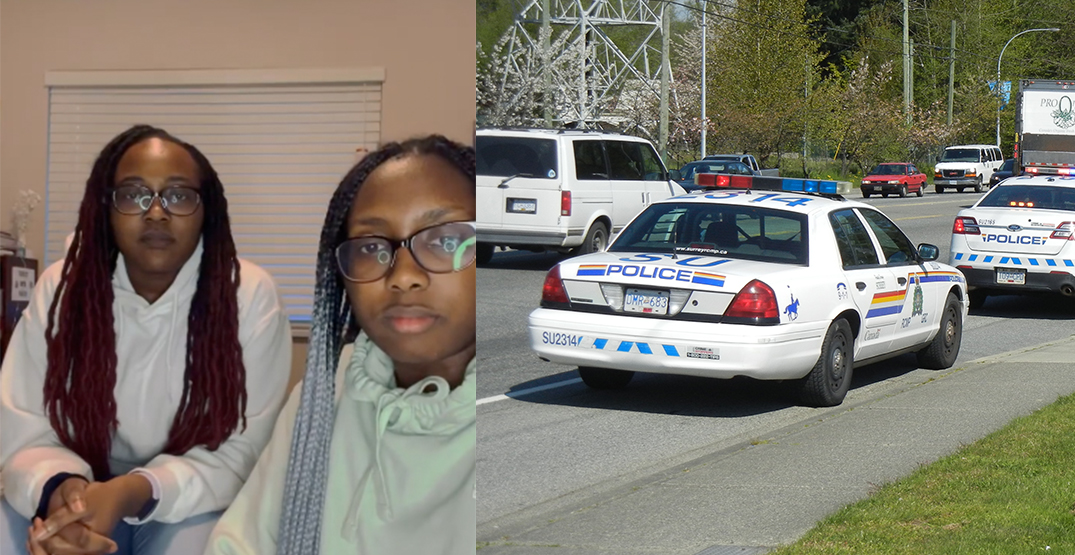 Four sisters from Surrey shared a disturbing experience with RCMP this week where officers removed them from their home and searched it for weapons while not doing the same to adjacent units with white tenants.

The sisters say they were treated more harshly because they’re Black, even though the youngest of them is still a child and the tenants downstairs are adults.

“It was traumatizing,” the eldest, Blanche Monabeka, said in an Instagram video about the experience.

“We’re still pretty shaken up. It’s a little overwhelming,” she told Daily Hive in an interview Thursday. “I’m just glad that video has gone extremely viral and the word is getting out there.”

She was home with her sisters aged 18, 15, and 10 on Monday when she noticed two officers outside on the street. She went out the front door to ask what was going on, and they told her there was a report of a weapon in the area.

She watched as more police cars pulled up and blocked off the road. Next, officers went on a loudspeaker to tell the girls to come out with their hands in the air.

The sisters went outside, and the cops told them to drop what they were carrying and put their hands up. Monabeka, who had phoned their mother, ended the call and put her phone on the ground.

She recalled it made them feel like criminals even though they had done nothing wrong.

A white female officer told them to get behind the cop car, and she wouldn’t answer Monabeka’s questions about what was going on.

Another cop, who Monabeka said was Middle Eastern, told them he would explain if they cooperated. He said police suspected there was a weapon in the house and they needed to search it.

“They didn’t ask us. They just said, ‘We’re going to do a search,'” Monabeka said in her video.

The sisters had to stand in the street for about half an hour while officers in tactical gear with heavy weapons searched their home, warning them that if they found another person in there they would “have some problems.”

But when approaching the white tenants who live in the home’s basement, Monabeka said officers asked them kindly if they could come in.

“How come you’re making us put our hands up, with minors, making us leave the house like that?” Monabeka asked in her video.

In the end, she said police found a toy gun in one of the tenants’ units.

The sisters are physically okay, but say they’re still reeling from the experience.

“We’re just praying that this doesn’t happen to anyone else ever again,” Monabeka said on Instagram. “It’s terrifying.”

Surrey RCMP spokesperson Elenore Sturko said the force is aware of the family’s concerns and is doing a review of the officers’ investigation. She added a senior RCMP officer has contacted the sisters about their concerns surrounding the incident.

“It is troubling for us that members of the public feel they have received treatment that is not in line with what they would have expected for any other member of the public,” Sturko said.

The family is meeting with the senior officer soon. Monabeka hopes counselling services are made available for her sisters and that Mounties train their officers on how to deal with people of colour and immigrants in the community, adding it’s not okay to treat children the way they treated her sisters.