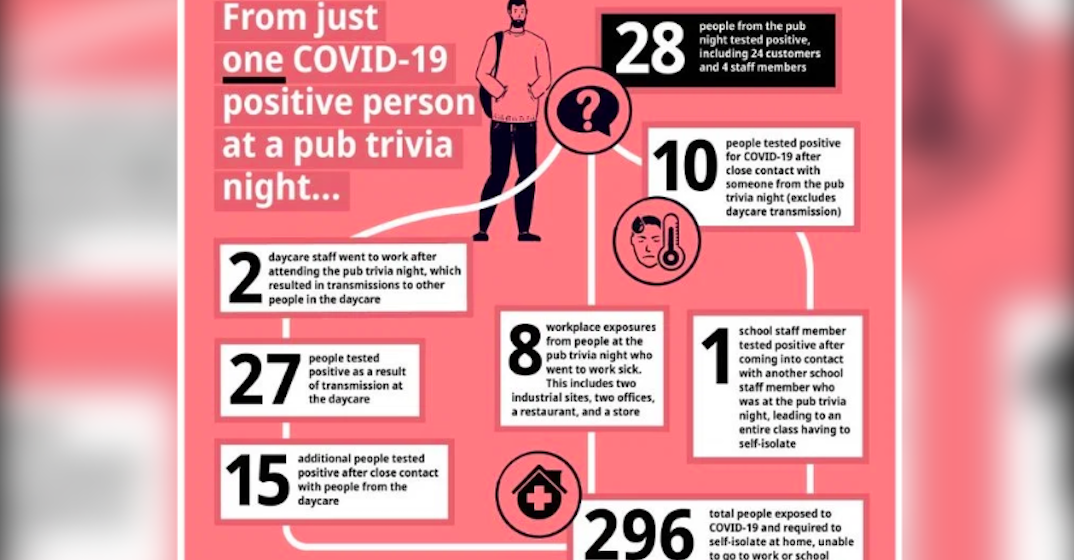 Following reports that a COVID-19 case at a pub’s trivia night in Metro Vancouver resulted in a superspreader event, officials have now released an infographic breaking down exactly how the transmission took place.

On Twitter, the BC government stated it only takes “one person and one night” for a single case of COVID-19 to quickly spread.

This, they said, is why it’s important that people continue to limit their social interactions and follow public health guidelines.

It only takes one person and one night for COVID-19 to spread quickly. By limiting our social interactions and following public health restrictions, we can help keep our schools, daycares and communities safe. #CovidBC

The infographic shows that a total of 296 people ended up being exposed to the virus following the incident at the Port Moody pub.

“Even small social gatherings can spread exponentially,” Provincial Health Officer Dr. Bonnie Henry said at a recent press conference. “People go from that small games night you had together — spreading to schools, workplaces, and to other settings.”

She noted that approximately 40% of COVID-19 exposures still stem from social gatherings, which are currently prohibited under the province-wide ban.

“We know that of a games night where there were 50 people in an establishment that should not have been having a games night and that 15 people from that event, which is against orders, became infected and spread to several workplaces, to schools, and a childcare centre,” Henry said.

“This is the message we’re trying to put out there,” she added. “it has implications, even though you think you’re not at risk or your family is not at risk.”

Editor’s note: A previous version of this story erroneously stated in its headline that the COVID-19 single-case infected 300 people. The headline has been updated to reflect that the single-case led to nearly 300 people being exposed.