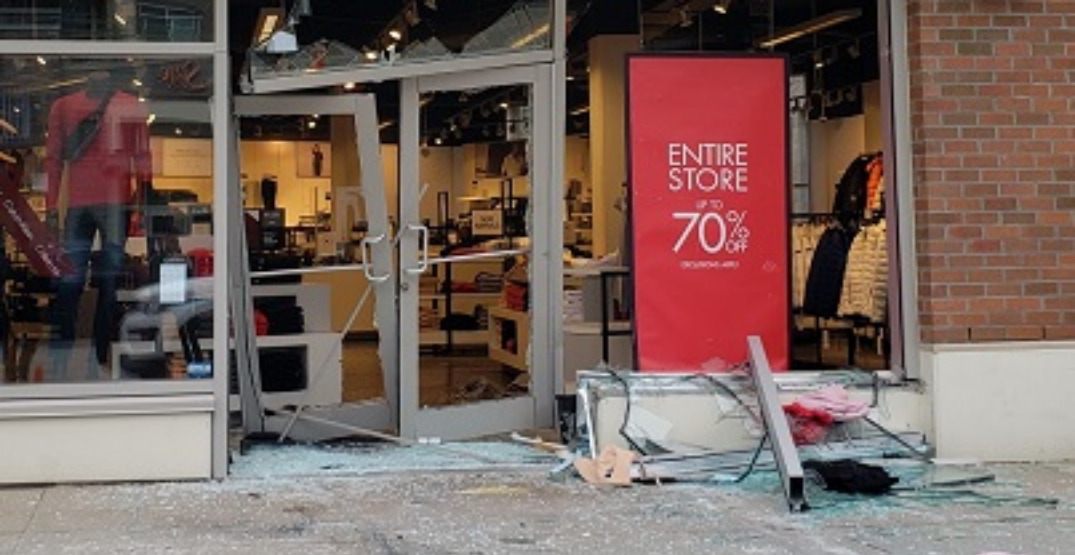 Surrey RCMP is asking for the public’s assistance to locate a suspect vehicle that was used in a chaotic robbery of a Calvin Klein store in the Morgan Crossing area of South Surrey.

The incident took place on Tuesday, December 21 at 4:26 am. Surrey RCMP responded to a report that a truck smashed through the front door of the Calvin Klein in the 15700 block of Croydon Drive.

The suspect then gained access to the store and stole approximately $5,000 in merchandise.

The suspect vehicle is being described as a 2000s grey Dodge Dakota with an unknown licence plate. The vehicle has sustained damage to the rear lamps on the passenger side. At the time of the incident, the vehicle was occupied by three to four people.

Police don’t yet know if the vehicle was stolen.

“This kind of brazen break-and-enter, using a vehicle to smash through the glass of a store, is dangerous and causes extensive damage to businesses,” says Constable Sarbjit K. Sangha in a statement.

“We are aware of two similar previous incidents in South Surrey using a similar method. Our officers are conducting extra patrols in the business corridor and we encourage the public to call police if they see anything suspicious.”

The area has many shops and stores and lots of foot traffic. The incident happened at a time when there weren’t a lot of people around, and no injuries were reported by the RCMP.

Surrey RCMP is asking anyone who has information on the whereabouts of the vehicle or who witnessed the incident to call them at 604-599-0502.