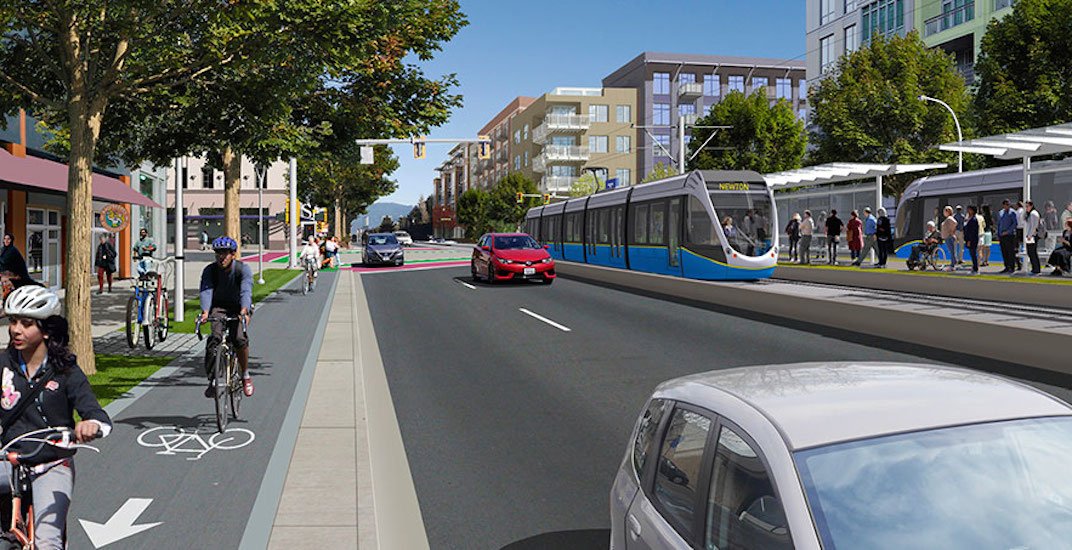 Artistic rendering of LRT on King George Boulevard at 76 Avenue in Surrey. (TransLink)

Better transportation for everyone in Surrey is one step closer to reality.

Last week, the Surrey-Newton-Guildford Light Rail Transit (SNG LRT) Project reached a critical milestone with the formal approval of the Business Case by the governments of Canada and BC. The Project is now fully approved and fully funded with backing by all three levels of government.

The procurement process officially began last week and my team is working to have BC’s first light rail project carrying passengers across Surrey by 2024.

We all know that Surrey is growing. We see it every day. More people, more jobs, and, yes, more traffic. There’s another 400,000 people expected to live in Surrey by 2040. That makes it BC’s fastest growing city.

With this in mind, we worked with the City to carefully study population and employment growth, detail Surrey’s transportation needs and establish its livability goals. Years of work and discussion have gone into the decision that a light rail system would be the best solution for Surrey to reduce congestion, meet growing transit demand, and support the development we all want: complete, connected and livable neighbourhoods.

People look for convenient public transit options when deciding where to live, work, and spend time. Light rail transit in Surrey will stimulate economic development, job growth, and density. This boosts transit demand, but also increases employment and housing options. There will be more than 28,000 jobs within 400m of an LRT stop in 2024 and more than 34,000 jobs by 2033.

The SNG LRT will replace the 96 B-Line once it’s open. This B-Line is the fastest-growing B-Line in TransLink’s network. It saw about five million passenger boardings in 2017 – a 50% increase from 2014. At this rate, ridership demand will outstrip B-Line capacity within a decade. LRT, which can move more than four times the number of B-Line passengers, will meet forecast demand well into the future while providing accessible and comfortable service along two important corridors.

Customers don’t want to have to wait long for a ride. LRT will be more frequent with five minute waits during peak period and a travel time of 27 minutes or less. Travel times for the 96 B-Line during peak congestion range between 29 minutes and 50 minutes.

BC is joining cities and regions around the world that are choosing light rail transit to create more vibrant, connected communities. We will learn from the experiences of the more than 400 light rail projects around the world to make sure we can build this Project in the least disruptive way.

This is an historic opportunity.

The SNG LRT Project is the greatest infusion of transit funding for the area south of the Fraser, and the largest capital investment in Surrey. There is much work to do over the next few years before we can ride LRT in BC, but we are closer today than ever before and are thrilled to say: LRT is on the way!