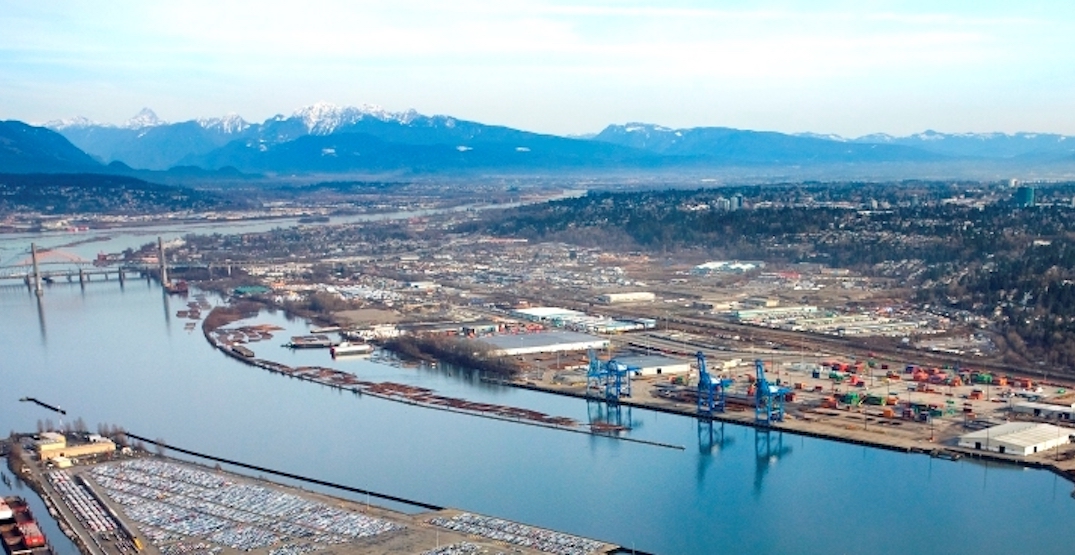 The Surrey Board of Trade (SBOT) has outlined its vision for a new waterfront district along the Fraser River in North Surrey, within the general area between north of the Alex Fraser Bridge and the Port Mann Bridge.

This is envisioned to be a large-scale revitalization strategy to create new housing and employment space, including a “vibrant” innovation district hub.

Currently, the shoreline along the Fraser River within Surrey is largely occupied by industrial businesses, port facilities, and railyards. SBOT states its vision would focus only on under-utilized lands, not converting industrial lands.

The idea for a “Fraser River Revitalization Strategy” was presented by SBOT to the Metro Vancouver Regional District earlier this fall as an economic recovery strategy.

They pointed to the Thames Estuary Growth Initiative, a mixed-use revitalization of the industrial waterfront of the River Thames in London, as an example. The British project was a collaboration between 17 local municipalities, the port authority, and industries, and the UK government offered a £1.5 billion investment.

According to SBOT, their idea has the tentative support of the Fraser Surrey Docks, and the municipal governments of Surrey, New Westminster, and Maple Ridge, as well as the chamber of commerces for Langley and Abbotsford.

However, the regional district is showing some hesitation in supporting the idea. It denied the board of trade’s request for up to $300,000 in grant funding to support further planning, instead only offering staff time.

The regional district also highlighted the importance of preserving and intensifying these waterfront areas for industrial uses, given the region’s very apparent shortage in job-supporting industrial space. Over the decades, Metro Vancouver has seen much of its industrial land base disappear, replaced by non-industrial developments such as new housing or non-traditional industrial uses, including film and television production studios.

Additionally, the regional district states major residential, commercial, and institutional development needs to be focused around existing urban centres and along frequent transit corridors, especially SkyTrain. Development outside of these areas should carry lower density.

“Most of these lands are not part of an Urban Centre and therefore the land use intent, as per Metro 2040, is not for significant urban development and major density trip generating uses,” reads the regional district’s response in a report.

There was a period about two decades ago when a proposed development by the provincial government could have dramatically altered the course of the waterfront industrial lands east of the Pattullo Bridge.

Towards the end of the 1990s, the provincial government was considering a relocation of the Pacific National Exhibition (PNE) from its historic home at Hastings Park in Vancouver, and the North Surrey site was seriously considered as one of the new location options. At the time, the PNE was a provincial crown corporation, and its lease with the City of Vancouver on using Hastings Park was about to expire.

The provincial government acquired a large strip of industrial land next to the bridge for a new amusement park, exhibition and performance facilities, a hotel, and a casino. But this plan was cancelled when the provincial government decided to transfer the responsibility of the PNE to the City of Vancouver, allowing the PNE and Playland to remain in Hastings Park.