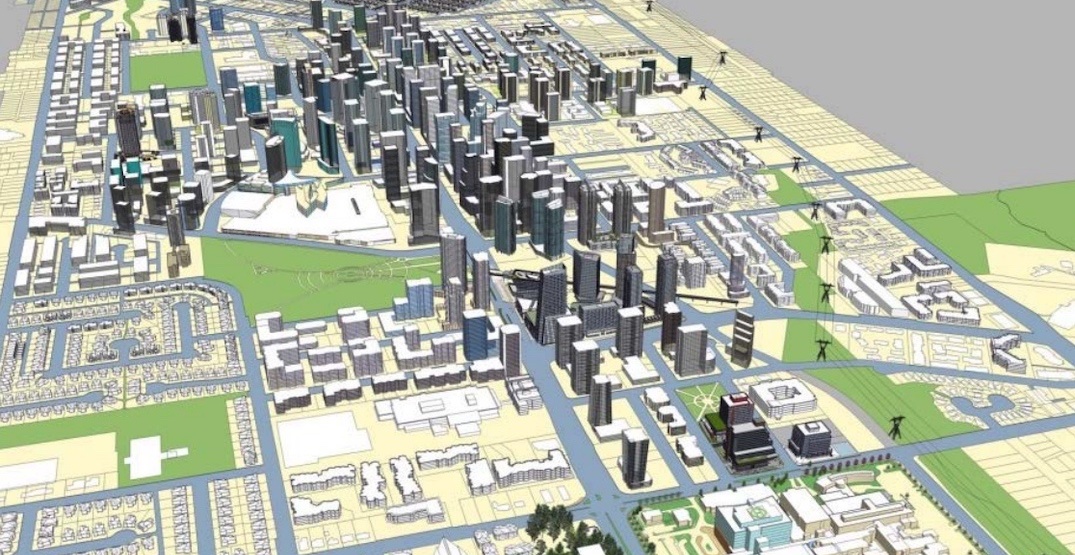 Surrey City Council is expected to approve a staff recommendation this evening that catalyzes an intensification of much of the core of Surrey city centre for office use.

This new central business district (CBD), a result of an update to the municipal government’s City Centre Plan, would require a minimum of 50% office and/or institutional space on the basis of floor area for new developments. It is an area framed by 104 Avenue to the north, University Drive to the west, Old Yale Road to the south, and King George Boulevard to the east.

The interim CBD area revolves around SkyTrain’s Surrey Central Station, and is currently anchored by Central City shopping mall — where SFU Surrey is located — and civic buildings such as Surrey City Hall and Civic Centre Library. 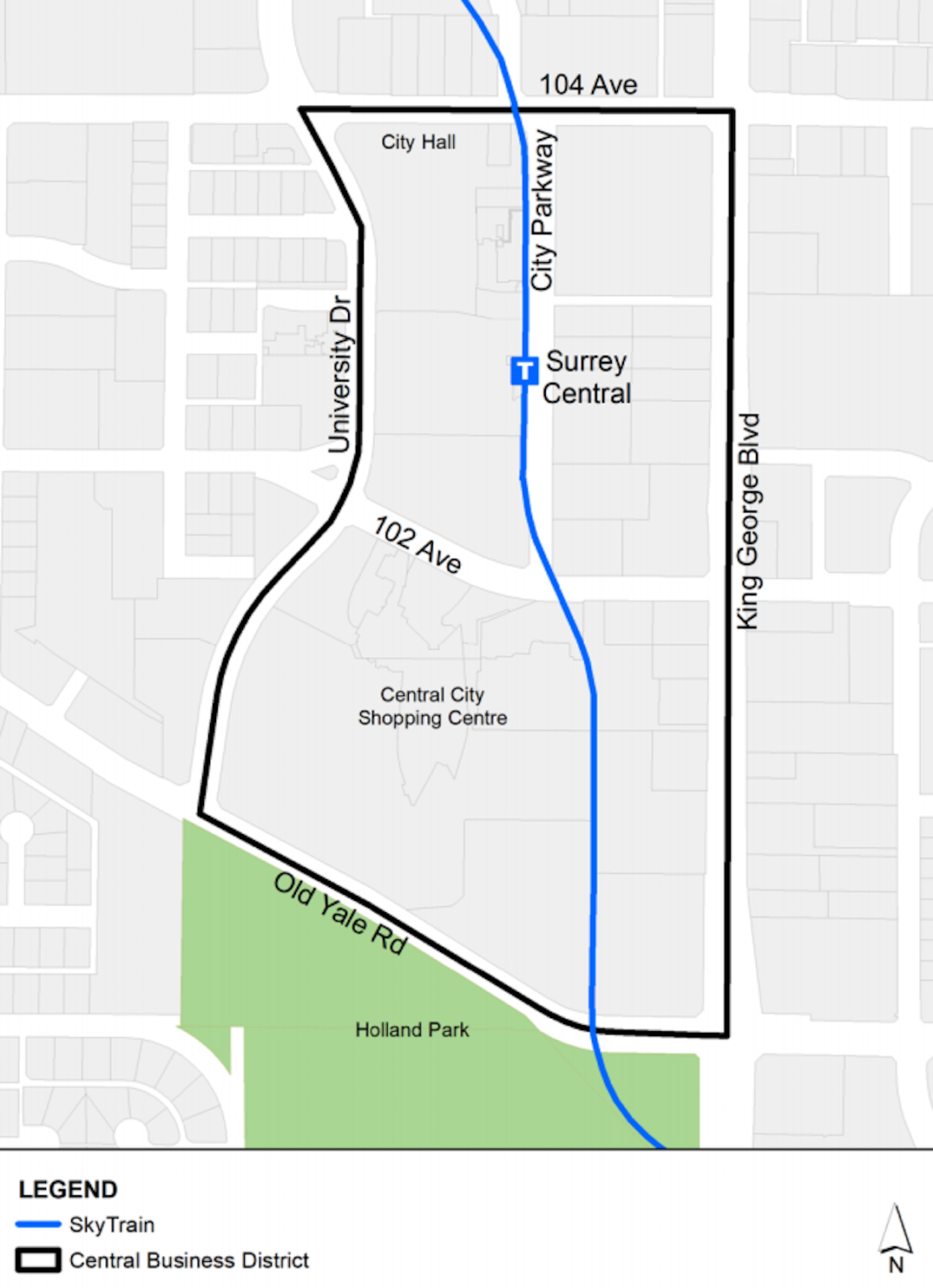 Map of the Central Business District in Surrey City Centre. (City of Surrey)

Roughly half of the designated CBD area under the provisional policy is owned by a single developer, Blackwood Partners, which owns Central City shopping mall.

The new policy comes ahead of the future master planning process for the redevelopment of Central City shopping mall. Blackwood Partners has plans to demolish its sprawling shopping mall property — both the indoor mall and ground-level parking — for new office and residential towers oriented around a street grid.

A staff report highlights there have been some gains in new office space in the emerging downtown area, but “this has occurred almost exclusively” outside of the core area next to Surrey Central Station.

Most of these office developments have popped up next to Surrey Memorial Hospital, King George Station, and Gateway Station, instead of the CBD.

There is also a risk that growing residential development interest within this core area could throttle the municipality’s vision of a strong regional employment centre.

“The City Centre Plan acknowledges the importance of encouraging office development and employment growth in what will be the region’s second metropolitan centre. In support of this, staff are proposing to establish a CBD where office and institutional development will be concentrated,” reads a city staff report.

“Under the current land use plan, office development is to occur in the high-density mixed-use areas surrounding SkyTrain stations and along key transportation corridors. This ensures the availability of well-located development sites for office use while providing flexibility for the buildout of the downtown. However, the current land use designations do not protect for office development and as a result, there has been significant interest to develop residential in the core area.”

Currently, Surrey city centre has about 1.2 million sq. ft. of office space, with the Central City office tower accounting for about half of this supply.

Beyond the provisional policy, further analysis by city staff could later lead to adjustments to the location and size of the CBD, the minimum office requirements, as well as new policies that support office and institutional development.

The City of Vancouver had similar concerns a decade and a half ago, when it had become apparent that its long-running “living first” policy had become a victim of its own success.

By the end of 2023, new developments producing a combined total of 4.6 million sq. ft. of office space will be completed in downtown Vancouver. 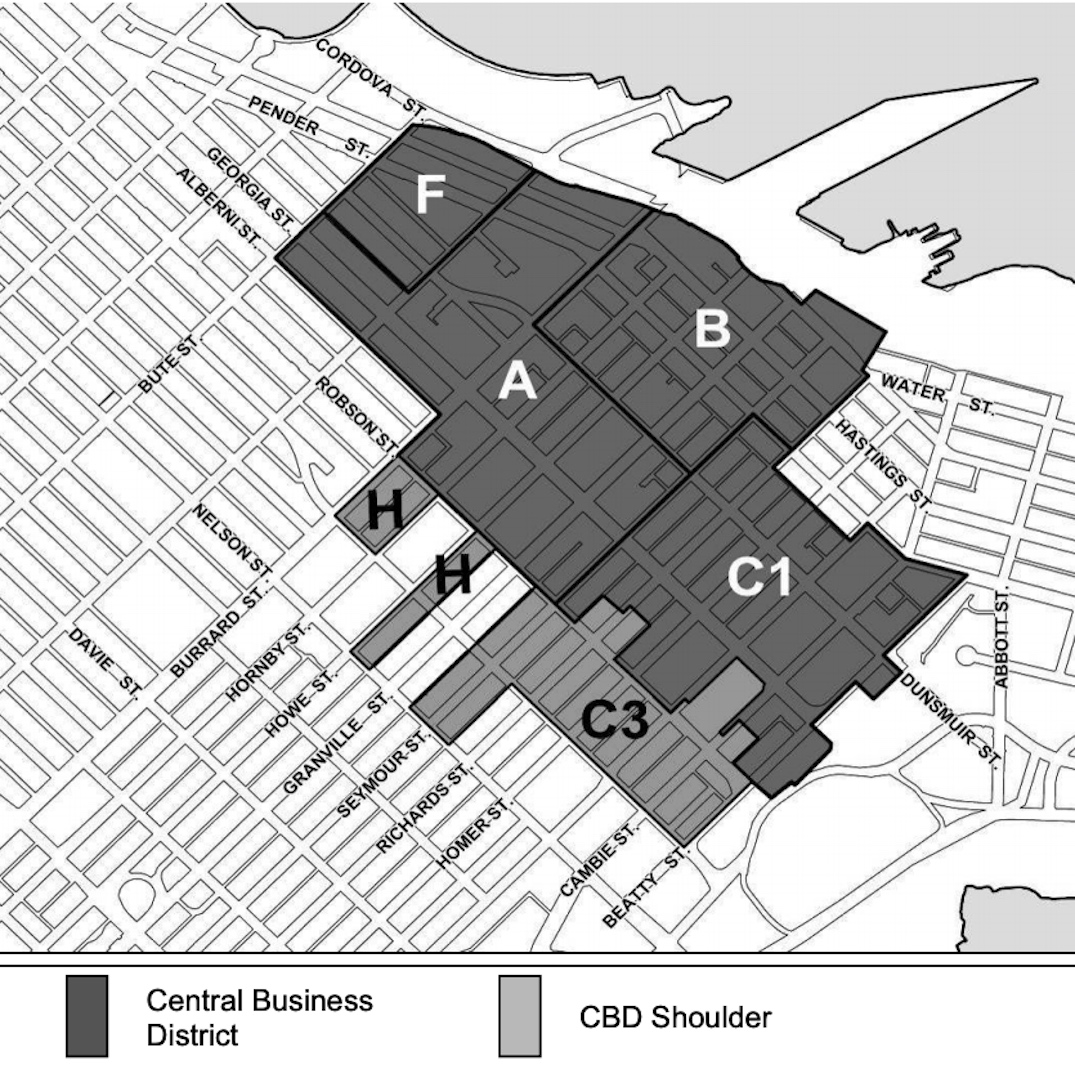 Map of the Central Business District in downtown Vancouver. (City of Vancouver)