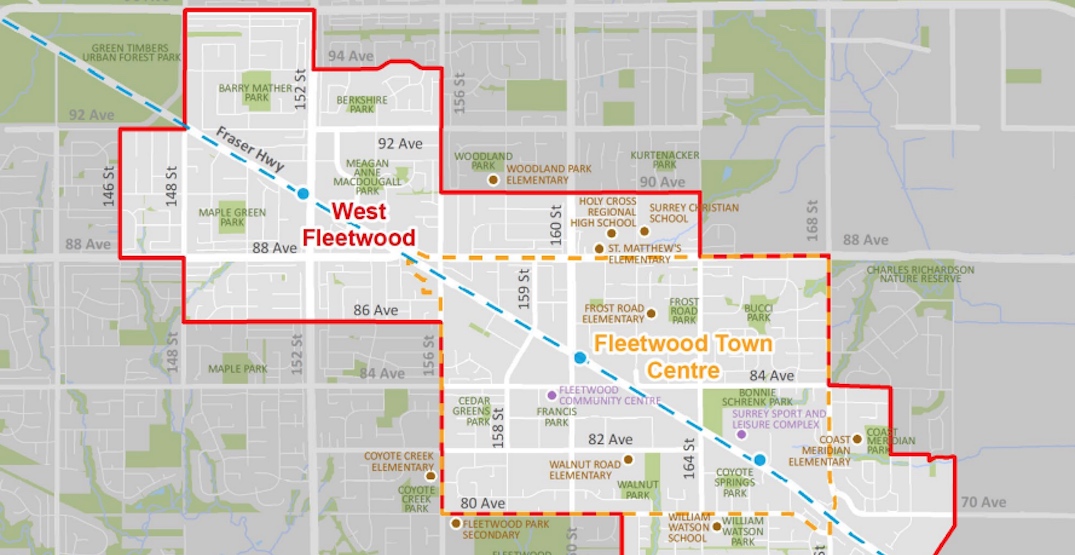 Planning area for the Fleetwood Plan. (City of Surrey)

The processes of reviewing area land use plans around future SkyTrain extensions in the City of Surrey and the City of Vancouver could not be more different.

While much controversy surrounds the highly dramatic and protracted process of reviewing the City of Vancouver’s Broadway Plan centred around the Millennium Line Broadway Extension, the City of Surrey recently approved a pivotal step in its own area plan process with little to no wrangling — to the extent that it essentially flew under the regional radar if it were to be compared with its counterpart.

After almost exactly two years of planning and public consultation, Surrey City Council has approved Stage 1 of the Fleetwood Plan, which densifies the Fleetwood neighbourhood around the area’s three future SkyTrain stations at 152 Street, 160 Street, and 166 Street — part of the forthcoming Expo Line extension along Fraser Highway to Langley Centre.

The planning area for the Fleetwood Plan spans over 2,200 acres along the Fraser Highway and future SkyTrain corridor.

Over the next 30 years, the Fleetwood Plan will catalyze at least a doubling in the number of homes — from 13,000 units today with 40,000 residents to 28,000 units with 84,000 residents, absorbing about 10% of Surrey’s overall annual average growth. The full build-out of the area plan over the longer term could reach 52,000 units with 142,000 residents — a population increase of about 100,000 residents compared to today.

The number of jobs created by new additional employment spaces — such as retail, restaurants, services, hospitality, institutions, and offices — would grow from 3,500 today to over 16,000 by 2051. 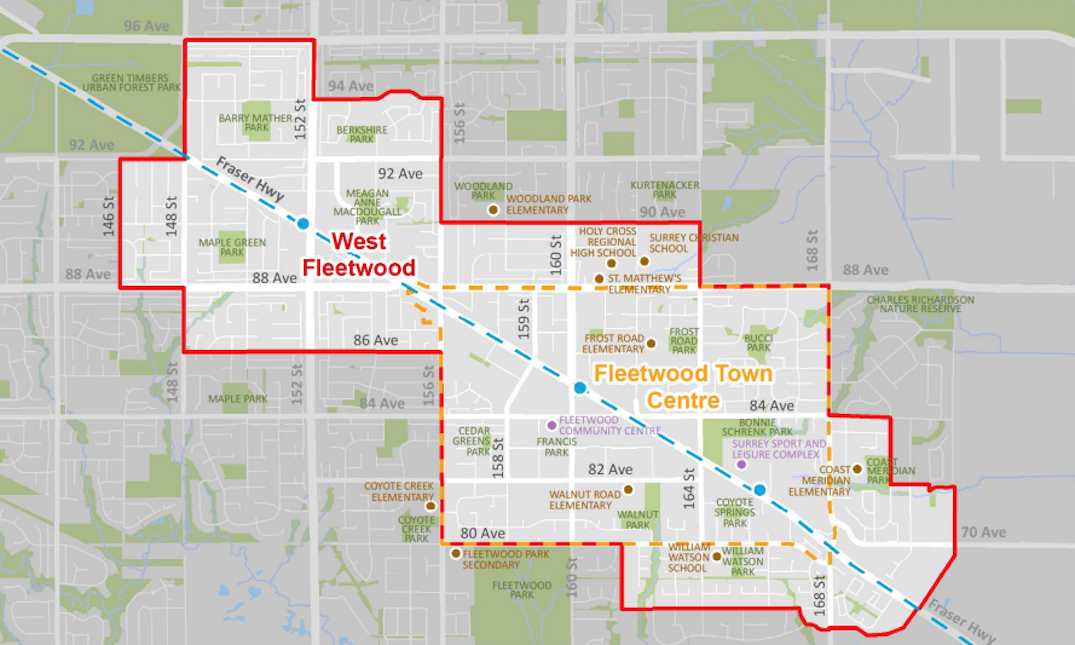 Planning area for the Fleetwood Plan. (City of Surrey) 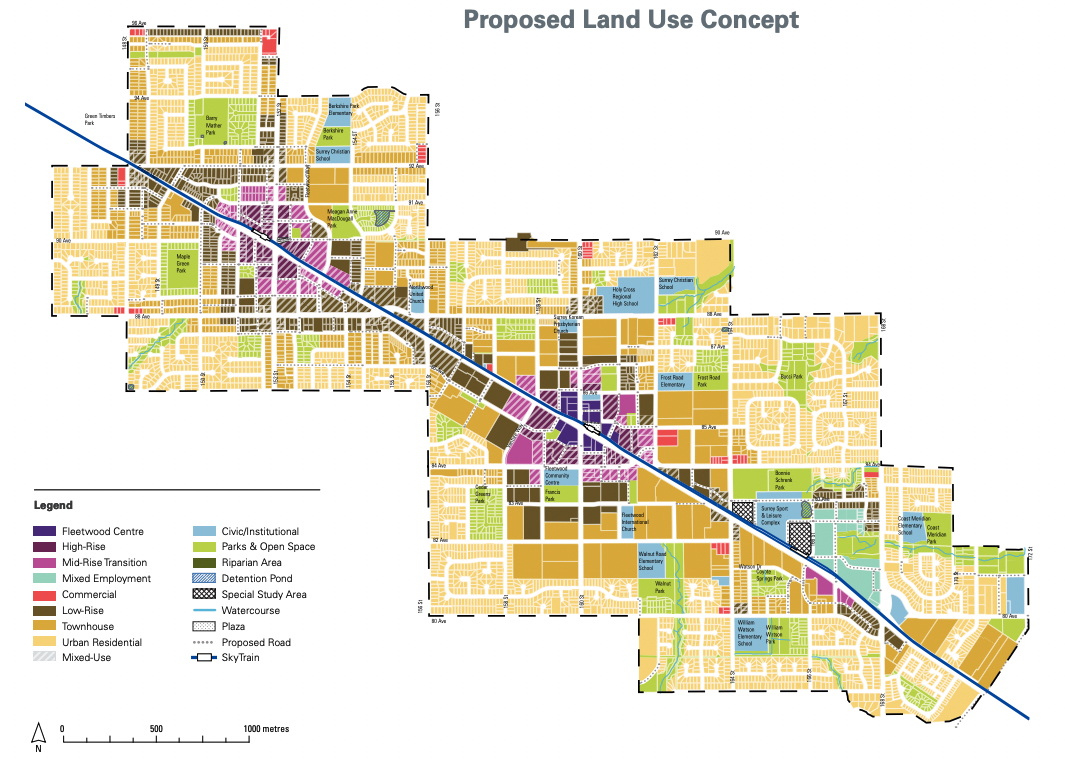 Land use concept for the Fleetwood Plan. Click on the image for an expanded version. (City of Surrey)

Following transit-oriented development best practices, the greatest building densities and heights will be situated closest to the new SkyTrain stations.

Up to 36 storeys would be permitted around 160 Street Station, where an employment district is envisioned to be the focal point of much of Fleetwood’s new commercial spaces and job growth. There would be lower core densities for the area around 152 Street Station, where towers would reach no more than 30 storeys.

New tower developments within the core areas of 160 Street and 152 Street stations would be required to dedicate the first several floors to active retail, restaurant, office, and/or institutional uses to create vibrant commercial areas next to the stations.

“By focusing the majority of future redevelopment within strategic nodes and corridors, much of the existing lower density areas, at the peripheries of the Plan Area, are expected to remain single-family oriented. The plan provides opportunities for sensitive infill throughout these peripheral areas, including townhouses, rowhouses, semi-detached and urban single-family uses over time.”

The population growth would be served by new and improved community amenities, including new and expanded public parks, and community and recreational centres. This could be achieved through land acquisitions.

Major investments would also be made in active transportation, while also maintaining the functionality of existing arterial and collector roads. This includes maintaining Fraser Highway — Surrey’s equivalent of Vancouver’s Broadway — with a four-lane arterial road design standard. 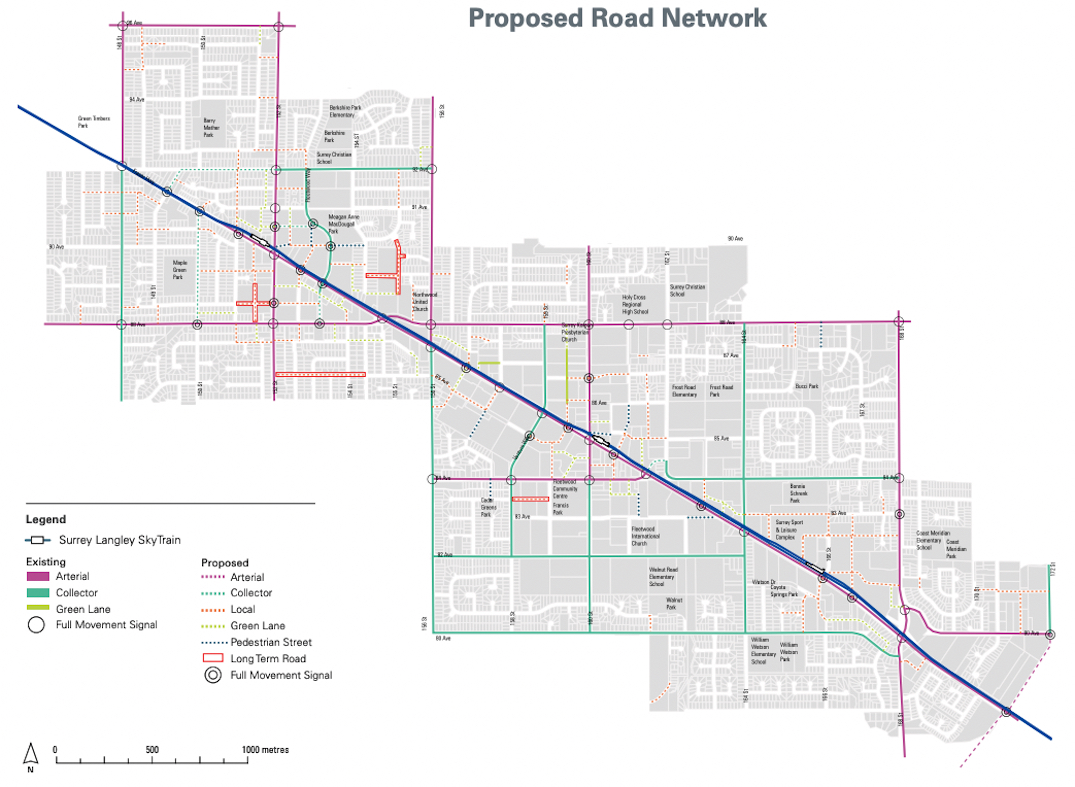 Road network concept for the Fleetwood Plan. Click on the image for an enlarged version. (City of Surrey) 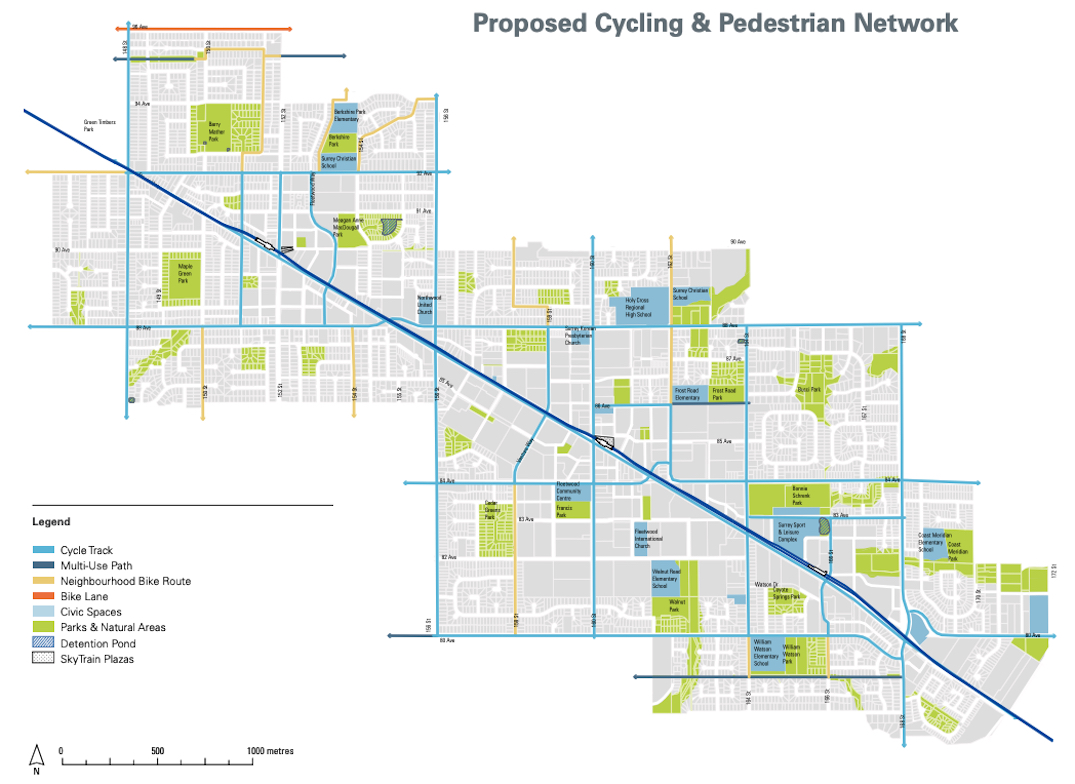 Cycling and pedestrian pathway concept for the Fleetwood Plan. Click on the image for an enlarged version. (City of Surrey) 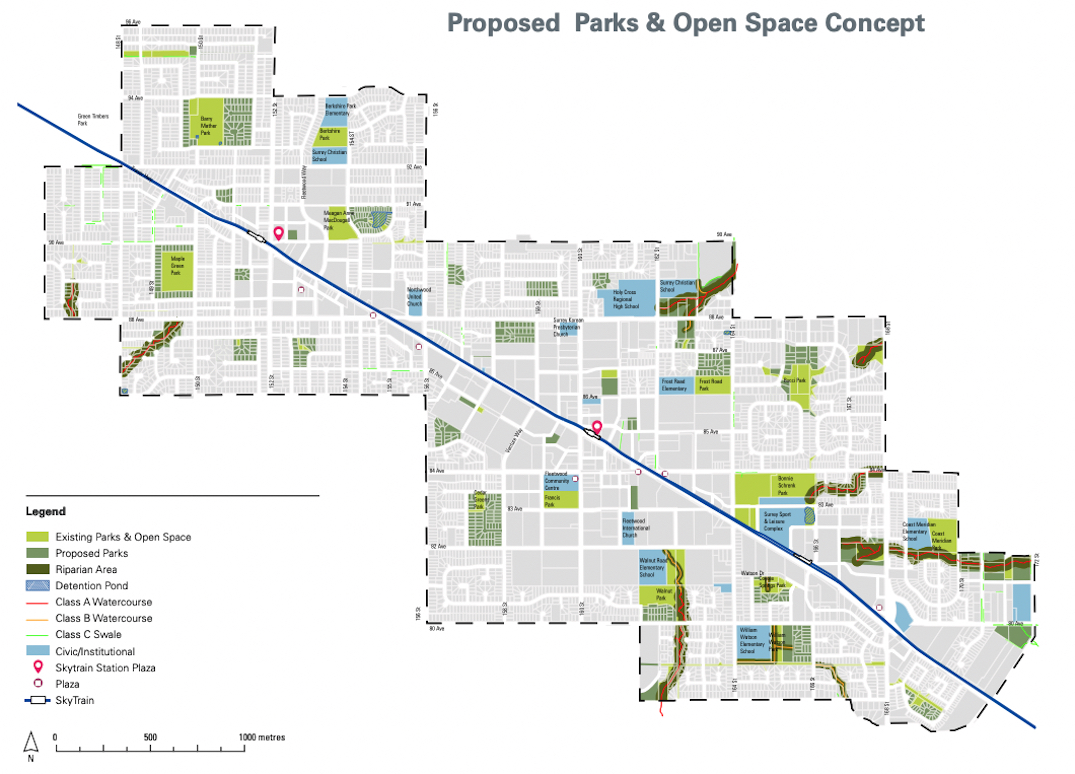 Park and open space concept for the Fleetwood Plan. Click on the image for an enlarged version. (City of Surrey)

During the public meeting on deliberating Stage 1 Fleetwood Plan, city council approved the strategy expeditiously, and there was a consensus on the exceedingly high level of support expressed by the neighbourhood throughout the planing process to date.

Councillor Laurie Guerra: “I think this is just another example of how council wants to move things forward and grow this amazing city. With the SkyTrain extension to Langley comes the Fleetwood Plan… [and] because of the SkyTrain coming down the Fraser Highway, which is one of if not the largest infrastructure project Surrey has ever seen, this Fleetwood Plan lays out the future of my neighbourhood. I support this wholeheartedly, and I am excited about the future of Fleetwood and the future of Surrey.”

Councillor Allison Patton: “What struck me as really encouraging is how positive the people were in their responses to the public consultation. It is actually really exciting and encouraging to see how excited Fleetwood is for this plan, and I do think the fact that we’re having SkyTrain down through the area is part of what’s bringing the excitement.”

Mayor Doug McCallum: “I was really impressed with the consultation with the public. To go through all that work asking the public what they want… and I was surprised by the support from the community. It was a large support overall. I truly was amazed. I think that’s a kickstarting of what SkyTrain is all about. The majority of this council campaigned on smart development. Smart development is exactly what this plan shows — it’s density along this corridor where SkyTrain is going to go. That’s smart development and how big cities are built in the future, no matter where in the world… This is a tremendous plan, and it’s certainly one of the best I’ve seen. It’s an example of getting people out of their cars, and it’s a main thrust that we have to do. SkyTrain is built for the young people… we’re a young city, and our youth will use SkyTrain.”

McCallum also suggested the Fleetwood Plan provides a baseline for the new development possibilities, asserting the densities could “easily get a lot more along this corridor, especially around the stations.” As an example, he specifically pointed to the organic high-density, transit-oriented development growth that has occurred around the Canada Line’s Marine Drive Station. 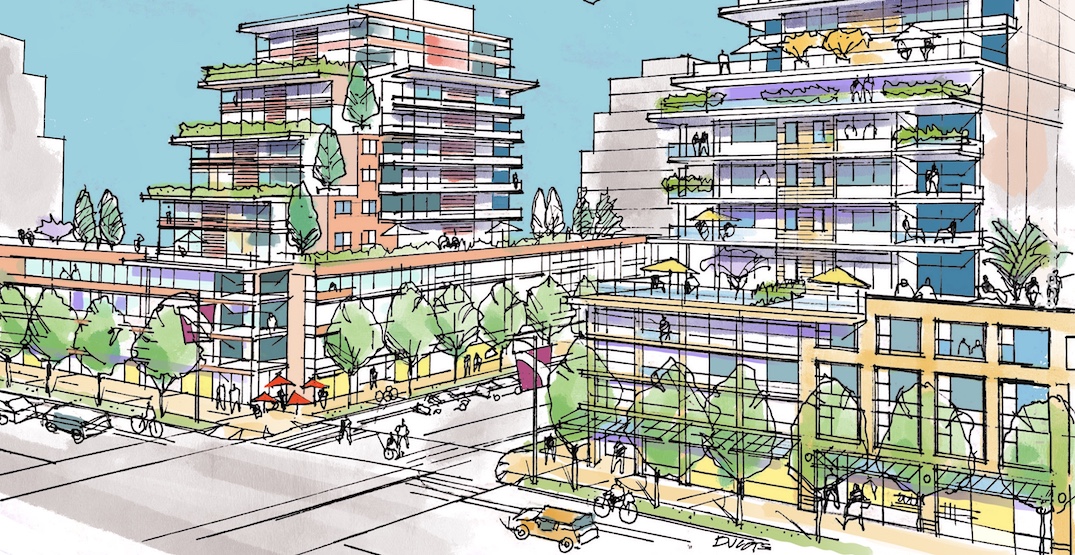 Artistic rendering of mid-rise buildings near SkyTrain’s 152 Street Station under the Fleetwood Plan. (City of Surrey) 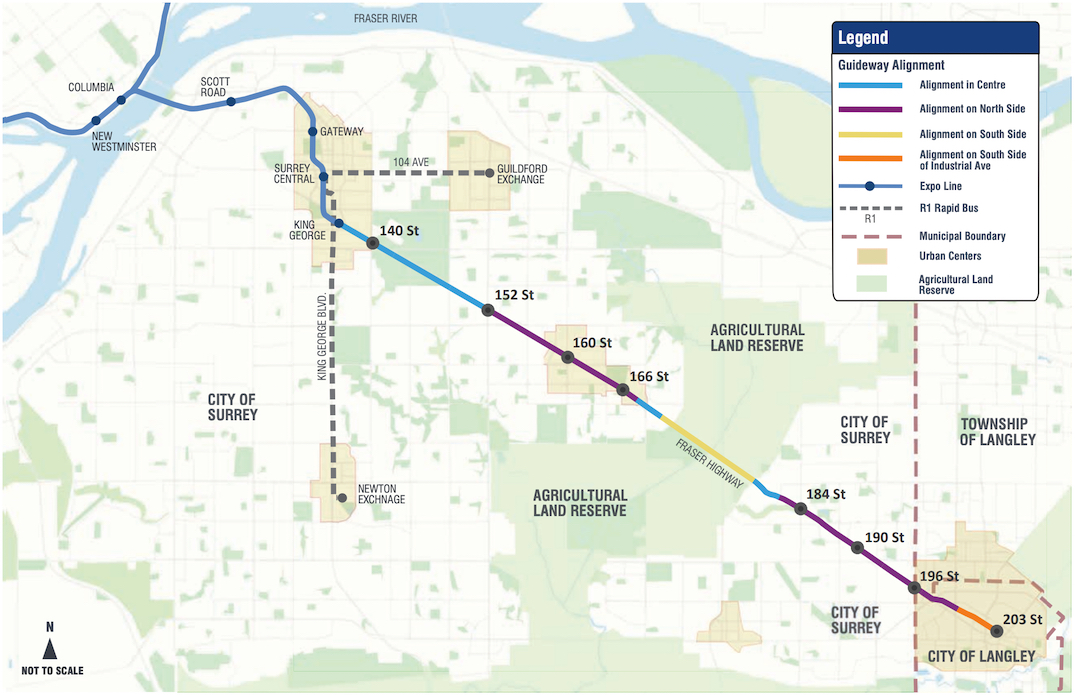 In exchange for the multi-billion dollar SkyTrain extension investments by the federal and provincial governments, the City of Surrey and the City of Vancouver are required to densify the areas around the future stations. The Supportive Policies Agreements for the respective SkyTrain extension project in each community — signed between the municipal governments and TransLink — triggered the planning processes for the Fleetwood Plan and the Broadway Plan.

Construction on the Expo Line’s 16-km-long, eight-station extension from King George Station to Langley Centre is anticipated to begin in 2024 for an opening in 2028. The Millennium Line’s six-km-long, six-station extension to Arbutus will open in 2025.