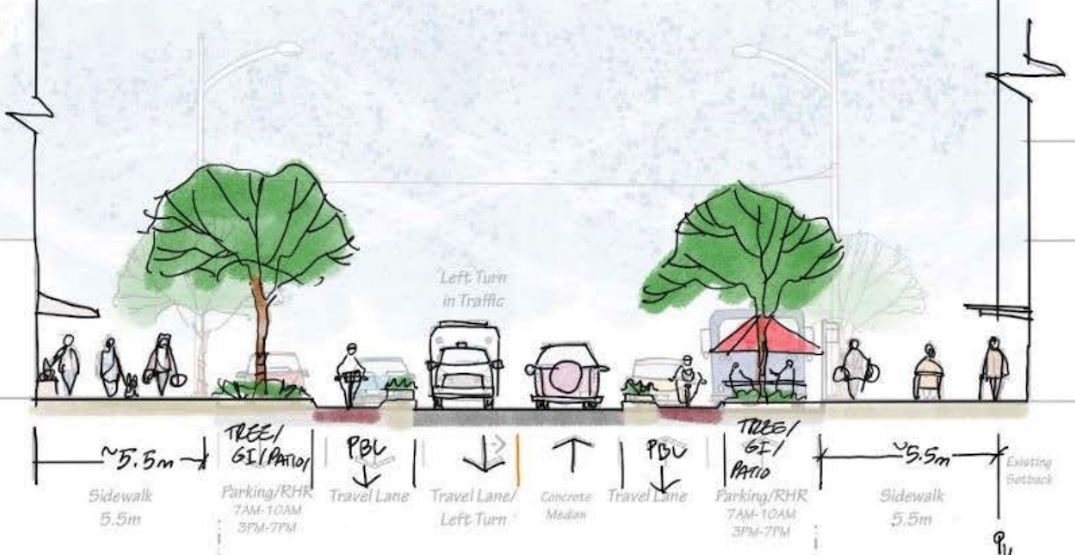 Staff with the City of Vancouver have been tasked to find a way to design new protected bike lanes on Broadway, while somehow also maintaining the original plan for widened sidewalks for pedestrians and patios, reducing road space dedicated to vehicles, and ensuring the street maintains its critical regional arterial functions for vehicles. But only after the Broadway Plan is officially approved.

The direction came from Vancouver City Council’s approval of an amendment to City staff’s Broadway Plan on Thursday evening, during city council’s deliberations on a total of 42 amendments on the area plan put forward by city councillors and the mayor.

The amendment to include bike lanes in the future “Great Street” redesign of Broadway was proposed by OneCity councillor Christine Boyle. City council approved it in a 9-2 vote, with NPA councillor Melissa De Genova and TEAM councillor Colleen Hardwick opposed.

“It really is about a decrease in private vehicles. The intention here is that there are fewer personal cars. There’s obviously a need for certain types of vehicles on Broadway,” said Boyle when she introduced her amendment before the debate on it.

She then suggested bike lanes on Broadway are a step down, a compromise, from her optimal vision of banning vehicles from Broadway to create a “linear park” across Vancouver.

“As much as I love the idea of a totally car-free linear park across the city, that is impossible here. There are some needs for vehicles on that space, and so we should prioritize those needs,” said Boyle.

Boyle also emphasized that her amendment’s direction of placing bike lanes on Broadway would not come at the expense of the original plan to expand sidewalks for pedestrians and patios, but City staff later explained it is much easier said than done.

Currently, Broadway’s central span paralleling with the future subway of SkyTrain’s Millennium Line Broadway Extension is a regional arterial road of six vehicle lanes — three lanes in each direction. City staff’s Broadway Plan outlined a “Great Street” concept of narrowing the roadway to four vehicle lanes — two lanes in each direction — for wider sidewalks for pedestrians and patios, while retaining a functional arterial road. Boyle’s intention is to reduce the number of vehicle lanes even further. 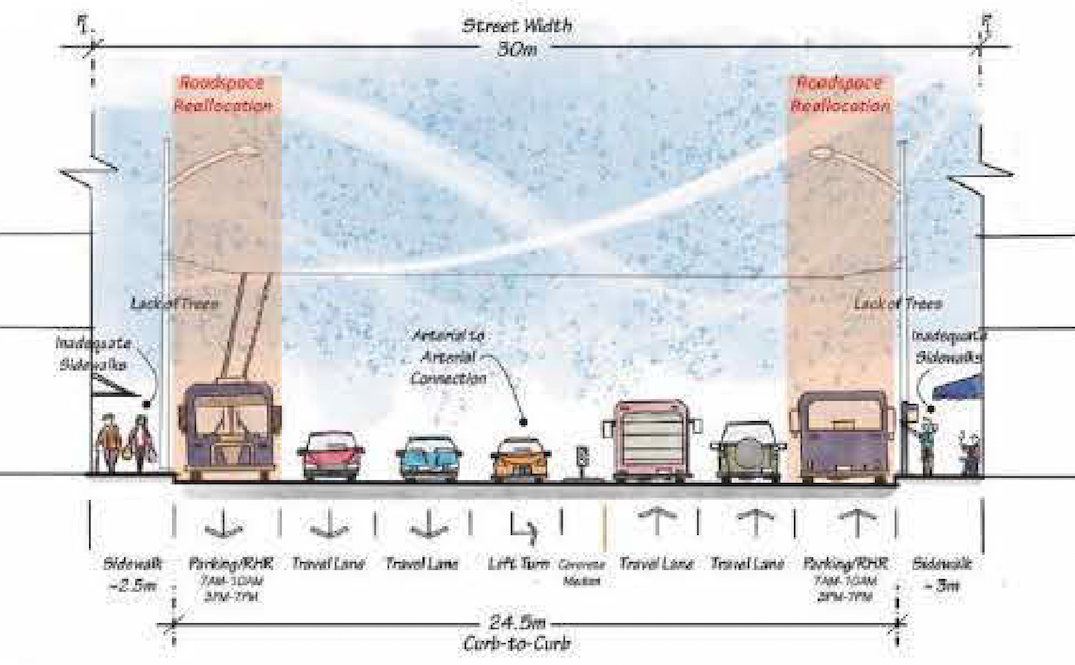 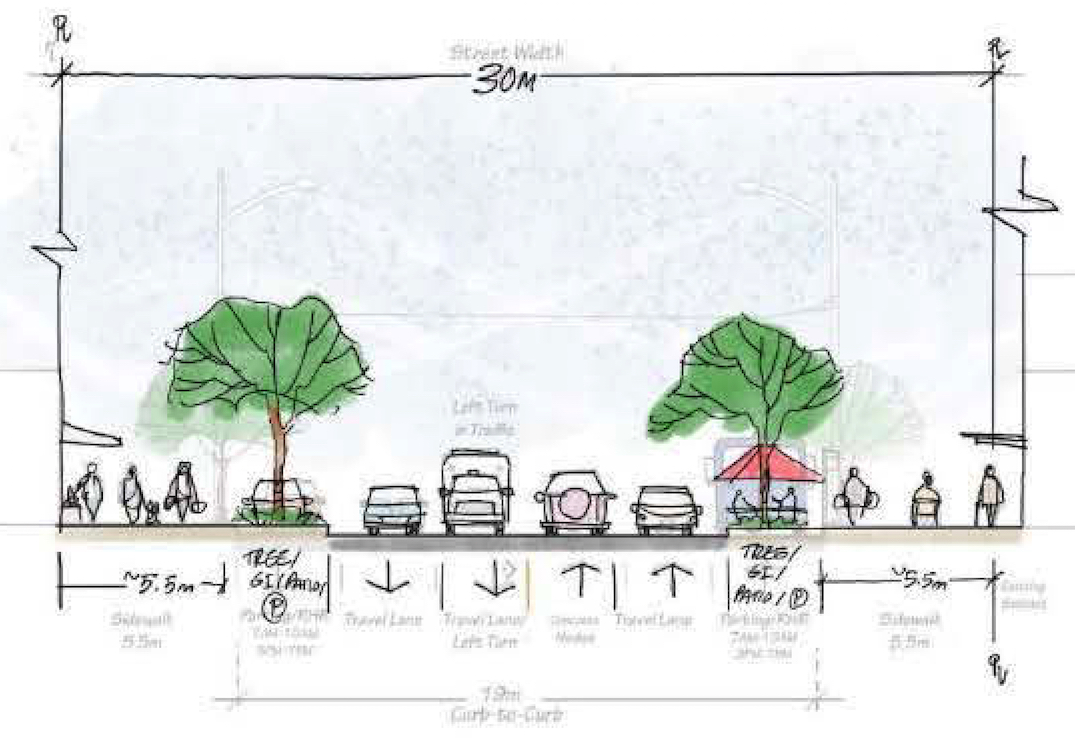 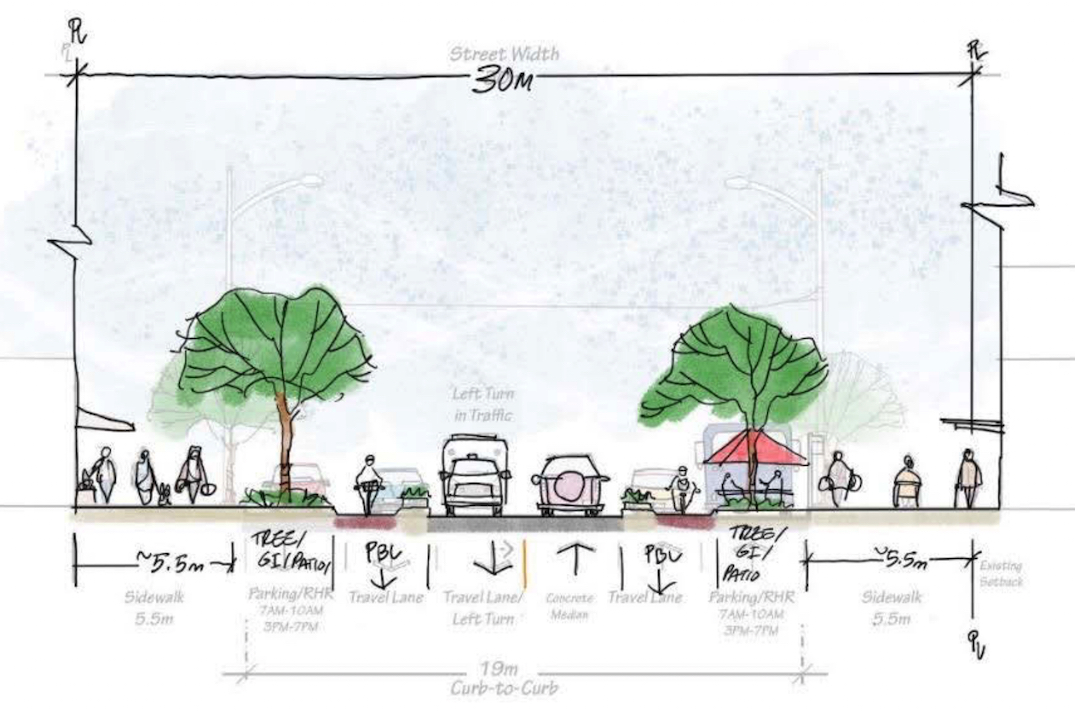 “Based on our analysis and what we heard, allocating space for pedestrians was really the priority,” said Paul Storer, the director of transportation for the City of Vancouver. “If the direction by council is to reallocate additional road space beyond what we’re proposing for bike lanes, it’d be a single vehicle lane in either direction, and bus and turn bays.”

But Storer added that such a design would require TransLink’s approval, as Broadway’s road classification falls under the Major Road Network, which is regulated by the public transit authority. During the Broadway Plan planning process, TransLink indicated it is supportive of maintaining four vehicle lanes — two lanes in each direction.

“People really wanted to see an improved sidewalk space, so more space for patios and walking. That was the priority for people [during public consultation],” reiterated Storer. “When we did the analysis, reducing it below two lanes in either direction would be a challenge, and this is a street where we share responsibility with TransLink because of the Major Road Network. We’d need to get their support for any changes, and they were supportive of going down to two lanes in either direction.”

The “car-lite Broadway” description of Boyle’s amendment — essentially calling for the downgrading of the street’s arterial function for vehicle traffic — was ultimately axed by an approved amendment put forward by Green Party councillor Pete Fry.

“I am happy with the general direction to build an AAA bike lane on Broadway, but I do struggle with the direction to City staff to implement a ‘car-lite Broadway.’ I’ve seen ‘car-lite Broadway’ and that’s what’s happening now to West 12th Avenue. So we’ve reduced the amount of traffic that travels along Broadway, and now we’re seeing a pretty miserable situation on West 12th Avenue,” said Fry.

“Because this direction is not really prescribing a real modal shift, it is just saying take the cars off Broadway. Well until we get rid of cars, the cars are going to need to go somewhere. I’m not comfortable with redirecting those cars onto West 12th Avenue, West 16th Avenue, or wherever else you’re going to go to facilitate the actual current movement of vehicles in our city, which does function on east-west arterials, like it or not… I don’t want to sacrifice other people’s livability to achieve an aspirational goal when we’re not really addressing reduction in personal vehicles.”

Dominato added: “Even with the construction right now with the subway on Broadway, the traffic on West 12th Avenue is completely snarled.” 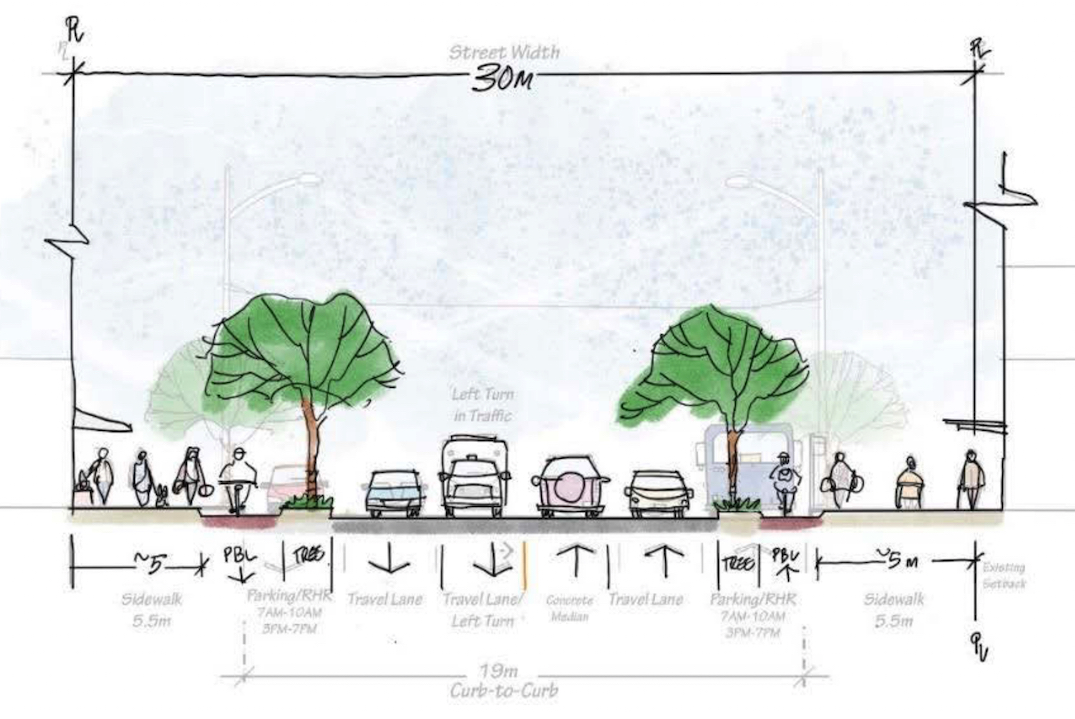 In an internal memo to city council late last month, City staff also made it clear that reducing Broadway below four vehicle lanes “would create significant congestion and have impacts to trucks, buses, emergency vehicles, and general traffic,” and that “there is no additional motor vehicle capacity on alternate corridors” to transplant arterial vehicle traffic from Broadway. Broadway is a key route for accessing Vancouver General Hospital.

As well, City staff emphasized that “Broadway is a designated truck route and an important goods movement corridor to commercial/industrial businesses in the Broadway Corridor,” with two vehicle lanes needed for trucks to turn in most cases, and that “the impact of a bus stopping in the only travel lane on Broadway would be significant.”

The Broadway Plan also calls for adding 50,000 more residents and 42,000 jobs within its planning area over the coming three decades.

However, an amendment proposed by Dominato on removing Boyle’s amendment’s direction to City staff to “commit” to building a bike lane on Broadway failed, with only Dominato and TEAM councillor Rebecca Bligh voting in support. Dominato’s amendment would have also directed City staff to report back on different street design options for accommodating bike lanes on Broadway.

“To me it just makes more sense to have a study on it. I’m not opposed to [the bike lanes], but we have to consider the implications, being that it is a medical precinct most of all, and an east-west connector,” said Bligh.

Future decisions to be made

But this is far from being the final decision on placing bike lanes on Broadway. Either way, City staff are expected to return to future city councils at some point after the October 2022 civic election on their different street design options and tradeoffs.

“I’ve heard from staff that they are going to come back to council probably a number of times before a decision is made on how bike lanes can be realized on Broadway. Through those discussions, I think we’ll be able to shape what’s best for the city going forward, recognizing that safe active transportation is absolutely a priority on the subway corridor,” continued Bligh.

ABC councillor Sarah Kirby-Yung added that she wants to see a “balancing” of the different modes that can co-exist with each other.

“I want wider pedestrian space and more space for micro-mobility, and to make sure that economy-driving commercial vehicles that don’t have another option can still move,” said Kirby-Yung, while also noting that City staff should do high-level planning work on the design options and tradeoffs, before investing major funding in the project. 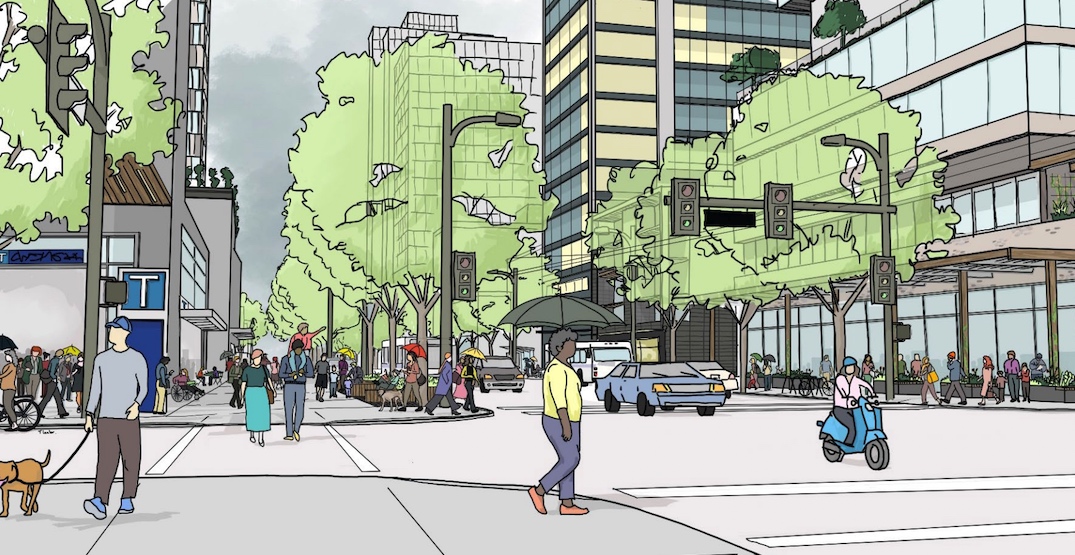 Illustration of the original “Great Street” concept of Broadway, with only widened sidewalks onto the curbside lane and no bike lanes. (City of Vancouver)

Other Broadway Plan amendments deliberated by city council on Thursday include increasing the flexibility on the number of towers that can be built on a city block, considering the mixed-use development potential of the Safeway site at 2315 West 4th Avenue, adding more community amenities and green spaces, enhancing protections for existing tenants in rental housing slated for redevelopment, and asking the provincial government to expand the area’s school capacity, including the construction of the Olympic Village elementary school.

While city council moved to approve or reject these various amendments, the Broadway Plan as a whole has yet to be approved.

City council still has dozens of proposed amendments to debate and vote on before they can reach the final stage of debating and deciding on the final Broadway Plan, as amended. The next meeting date on the Broadway Plan is scheduled for June 22, 2022.