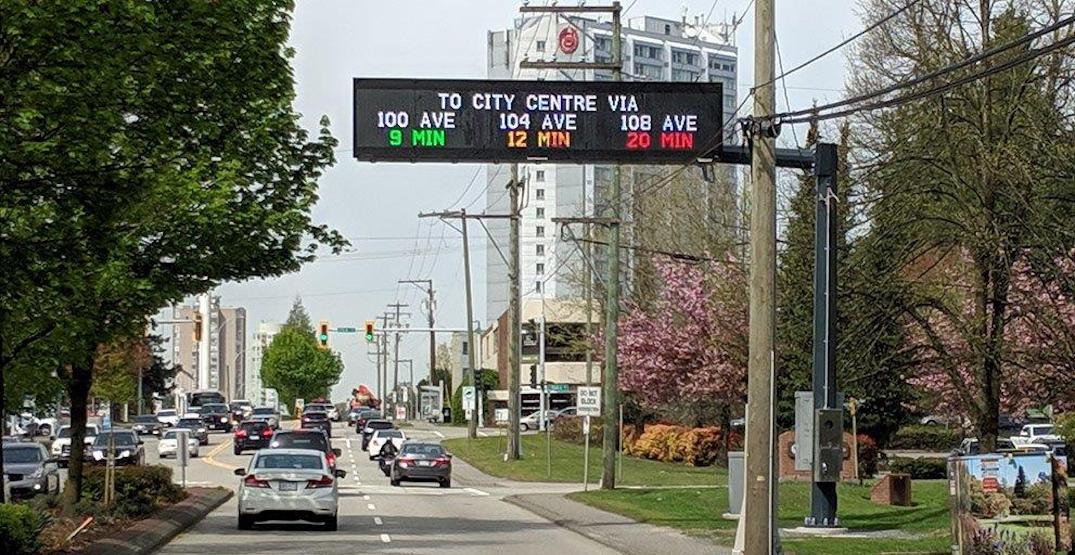 Dynamic Messaging Sign on 104 Avenue, westbound at 154A Street. (City of Surrey)

In an attempt to cut down on emissions as a result of idling and congestion, the first municipally operated road travel time signs in Surrey promise to help drivers make informed decisions about their possible travel routes.

The City of Surrey announced today it has launched its Advanced Traveller Information System (ATIS), which is supported by an expansive high-tech network of 50 Bluetooth sensors installed at traffic signals throughout the city’s northwest area.

Data collected by the sensors is then analyzed by a computer at the city’s Traffic Management Centre, which tracks the speed and travel time of the detected Bluetooth-enabled devices in vehicles. The data is secured by encryption when it routes through the computer system. 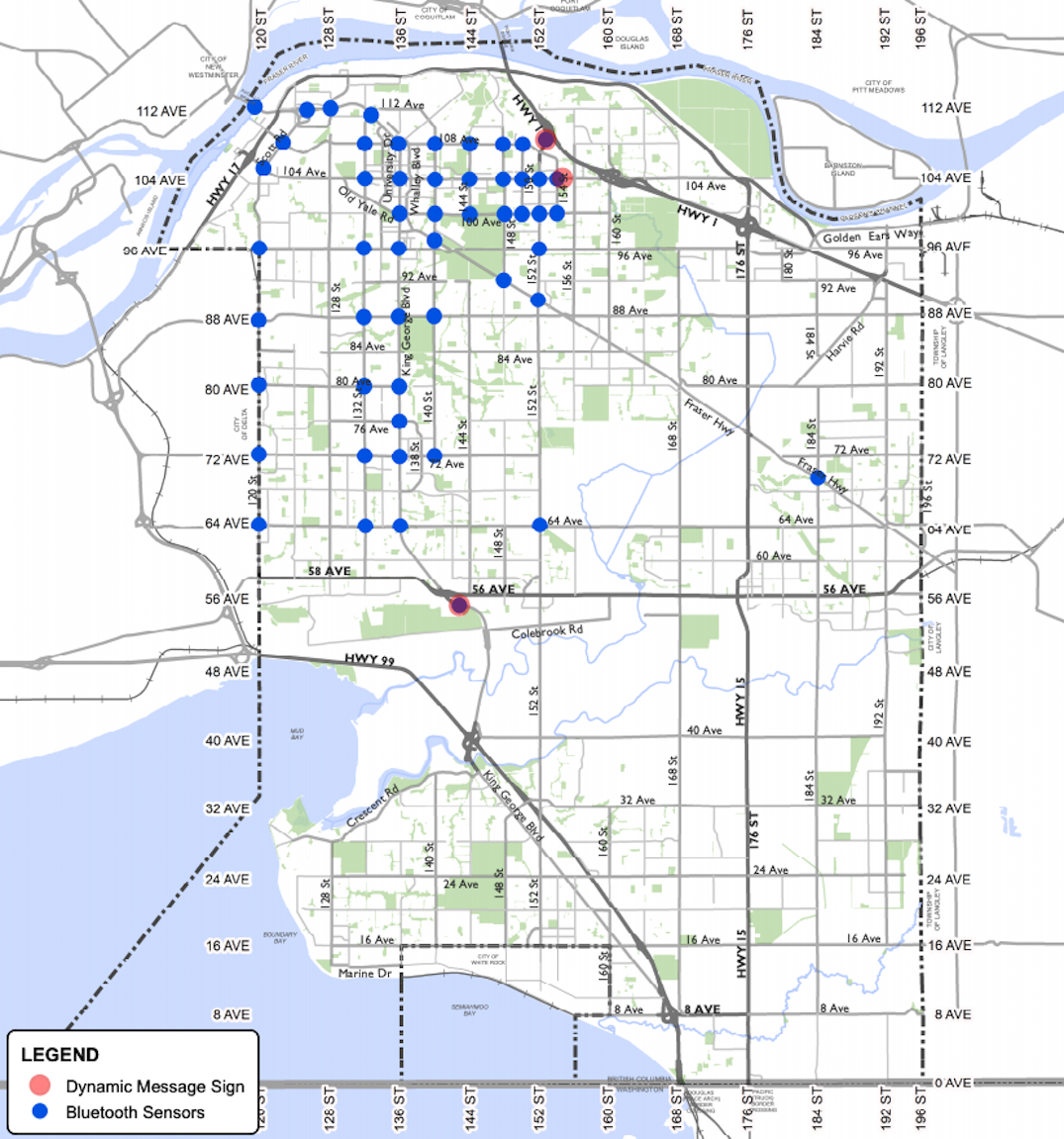 The real-time road travel times displayed on the overhead digital signs are based on a comparison of real-time speeds to historical speeds. When the data shows traffic is travelling slower than normal, the traffic signals will be adjusted and the digital signs will be used to alert the public of changing traffic conditions.

There are currently three overhead, full-colour LED, dynamic messaging signs that inform drivers of alternate route choices for travel towards Surrey city centre from Highway 1 in the north and Highway 99 in the south. The signs are located at: 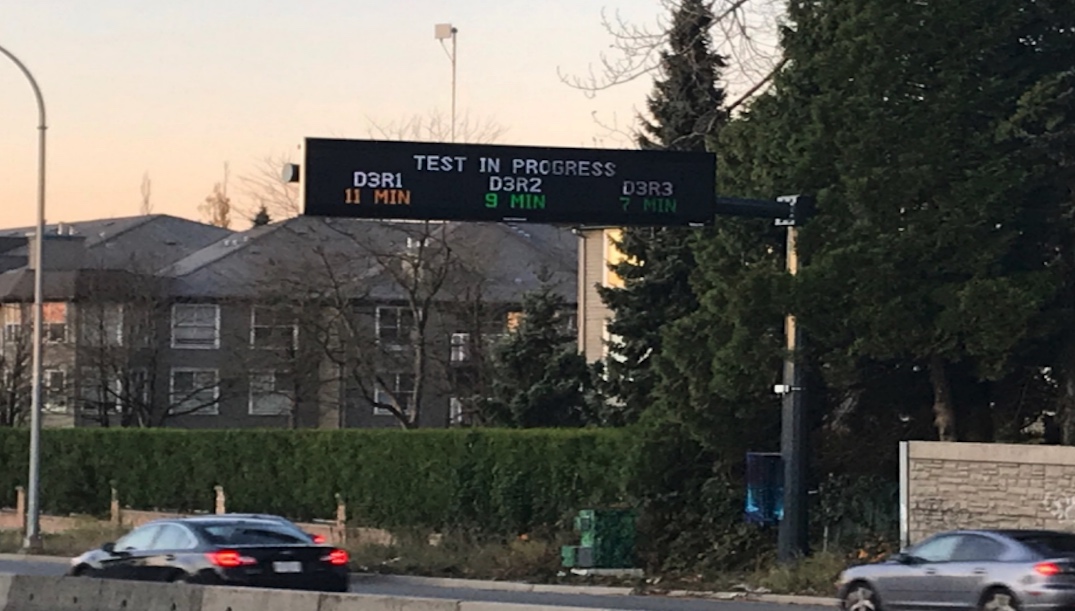 Besides providing alternative routes and travel times, the signs can also be used to display other messaging, such as planned or unplanned lane obstructions, severe weather alerts, notification of emergency services activity on the road, and Amber Alerts.

ATIS will fully integrate with the municipal government’s other systems, including the exclusive wireless radio communications system, nearly 500 traffic cameras, and over 410 networked traffic signals.

According to a city staff report last month, the entire ATIS project cost $1.5 million, with half of the project funded by the federal government from Transport Canada’s Asia-Pacific Gateway Corridor Infrastructure Fund. The municipal government funded the remainder.

“As we activate our Dynamic Messaging Signs, the City of Surrey is opening up even greater possibilities to make traffic safer, improve flow, and reduce environmental impact,” said Surrey Mayor Doug McCallum in a statement.

“Surrey has been recognized for being at the forefront of leading-edge, innovative communications technologies. The Advanced Traveller Information System that is being launched today is the latest example of how we are continuously improving our traffic information network in Surrey.” 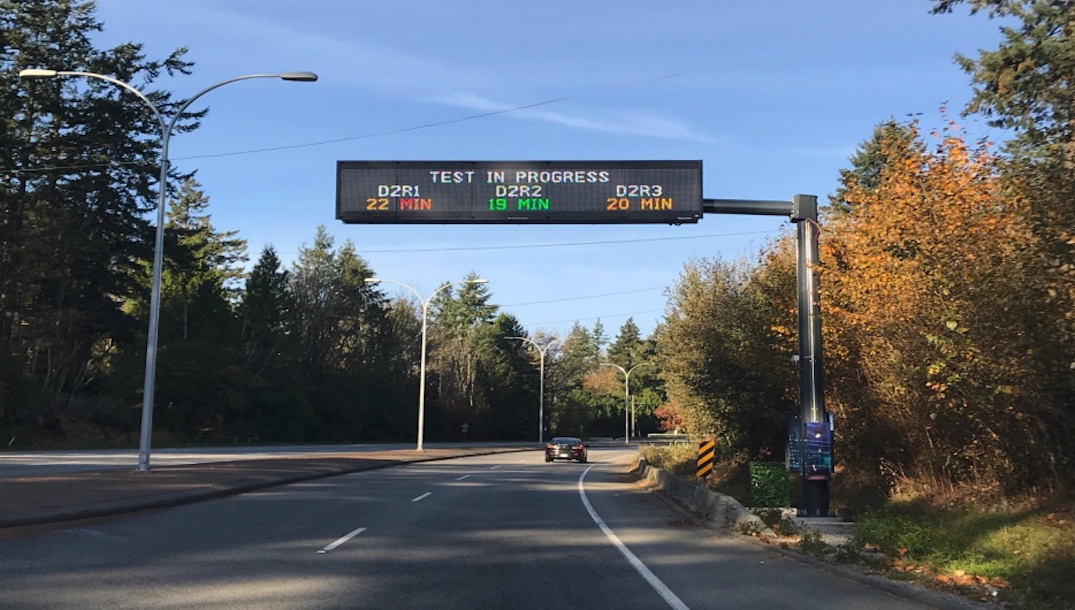 The new ATIS in Surrey is the only Canadian ATIS application installed in an urban context on arterial roads.

This past September, another real-time digital sign system for drivers was also launched in the eastern Surrey and Langley areas. But this system differs by providing drivers with information on train traffic at ground-level railway crossings along the Roberts Bank Rail Corridor.

A total of six signs are activated by sensors that detect a train’s presence, direction, and speed, and the information displayed on the signs are designed to inform drivers the direction the train is coming from and which alternative road crossings are open and closed.