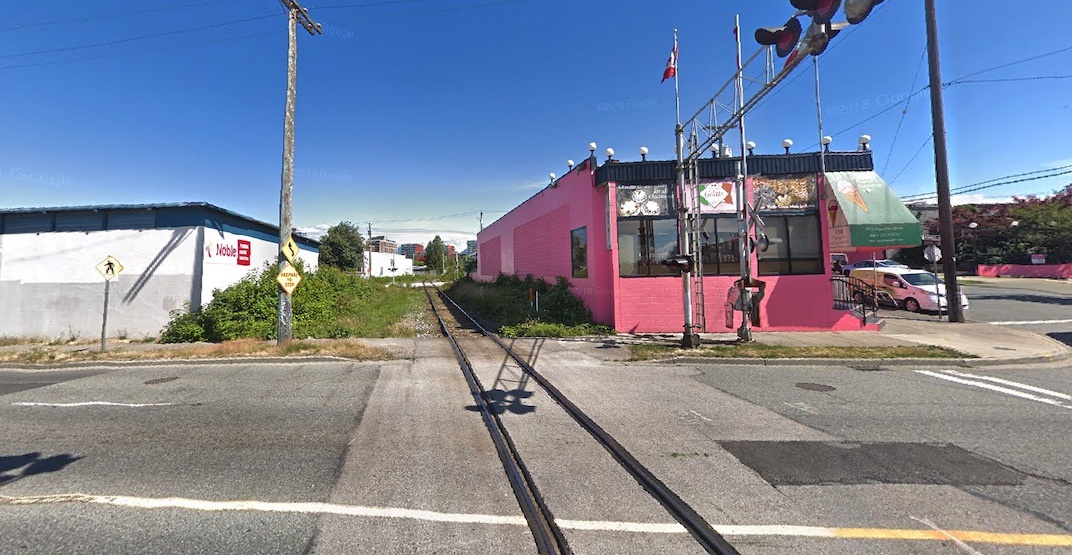 The existing single-track CN Railway crossing through Venables Street, which is the section that will be twinned. (Google Maps)

The railway way corridor that runs through East Vancouver’s Strathcona district and the Grandview Cut and leads to the Port of Vancouver will be twinned.

CN Railway announced today it has signed an agreement with the federal government and the Vancouver Fraser Port Authority to double-track the four-km section of rail that runs from Powell Street near the port then along the eastern edge of the False Creek Flats and through the Grandview Cut to Nanaimo Street.

The added capacity is necessary to meet the growing cargo traffic volumes coming in and out of the port.

Traffic volumes on CN Railway’s single track through this corridor spiked in recent years, but the increased frequency of the long freight trains has caused congestion at some road crossings, particularly at where the railway crosses Venables Street.

“This project is part of a large group of projects identified through the Greater Vancouver Gateway 2030 plan to meet Canadian demand for import goods from Asia and grow Canadian exports,” said Robin Silvester, president and CEO of the Vancouver Fraser Port Authority, in a statement.

“By contributing to new road and rail infrastructure beyond the port, we can help ease the impacts of growing trade on local communities while fulfilling our federal mandate to facilitate Canada’s trade objectives.”