A plan by the province’s electric utility to build a major underground electrical substation beneath an elementary school in downtown Vancouver’s West End neighbourhood has officially received the go-ahead.

Back in June of this year, the VSB voted 6-2 in favour of entering into an agreement with BC Hydro that allows a substation to be built on the Lord Roberts Annex site at Nelson Park, located at the intersection of Bute Street and Nelson Street.

Under the agreement, BC Hydro will pay an upfront “fair market price” for the “subsurface parcel” of the school site that will be used for the substation. As well, the electric utility must also temporarily lease the school site for its construction purposes.

This week, the terms of that agreement were released:

The construction of an elementary school in a City of Vancouver development in Coal Harbour, which includes housing and child care spaces, is planned for completion in 2023. 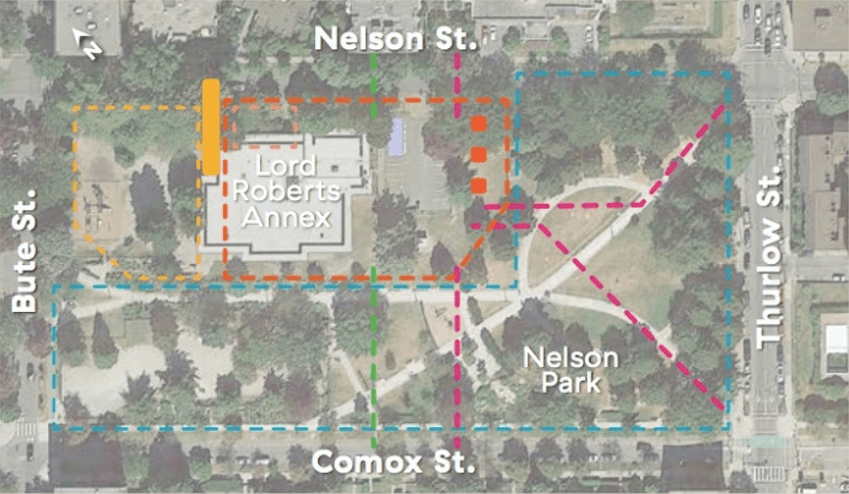 Layout of the new elementary school and underground substation at the site of Lord Roberts Annex School and Nelson Park. (BC Hydro)

The school will be funded with a portion of the $65 million received this month by the District from BC Hydro. Students from Lord Roberts Annex will temporarily attend the school to be built in Coal Harbour, while the substation and the new school at the Lord Roberts Annex site are constructed.

The remaining funds, together with the money from the construction lease in 2023 and accumulated interest, will fund the construction of a replacement elementary school at the Lord Roberts Annex site. All funds from BC Hydro to the District will be held in a separate capital account.

“I am pleased our district can move forward in building new schools with space for more students,” said VSB Chair Janet Fraser “In the years ahead, VSB will continue to consult and work with our school communities, stakeholders and neighbours during construction of the future schools at Coal Harbour and the Lord Roberts Annex site.”

BC Hydro determined the need for a new substation in the West End as the electricity system in downtown Vancouver is ageing and requires upgrades.

When BC Hydro first announced its underground substation proposal in January 2017, it was significantly more ambitious, entailing not only the West End school site but also Emery Barnes Park in Yaletown. It called for the staggered construction of two new underground substations on the school and park sites.

However, BC Hydro cancelled the plan shortly after over the City of Vancouver’s demands for the full market price of the value of the land used. The municipal government also felt the process was rushed and there was not enough public consultation.