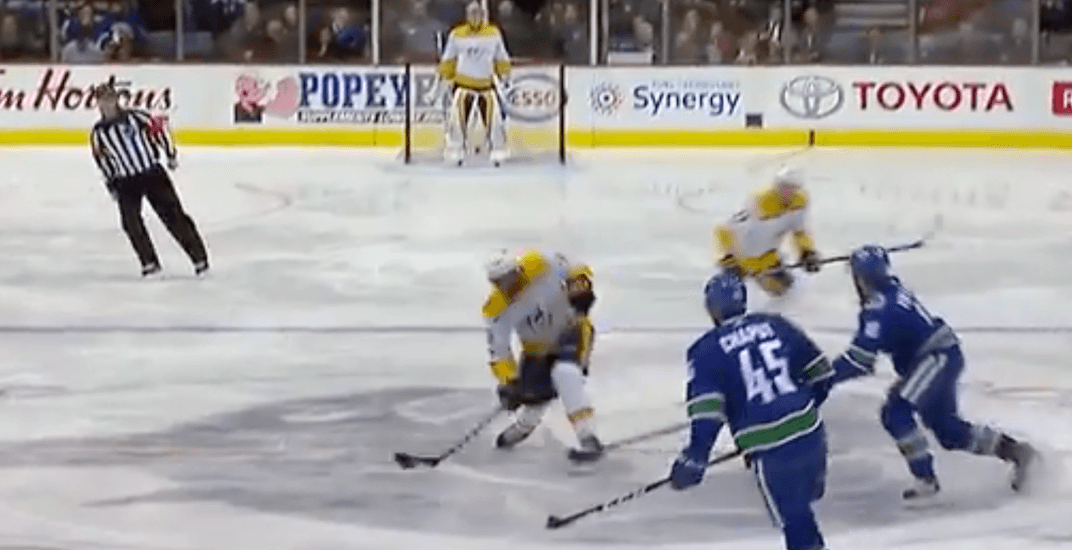 I know you were thinking it.

It was a rough night for the Vancouver Canucks, who were blown out at home by the Nashville Predators on Wednesday night. They were outshot 48-26, and outscored 7-1.

The game included an embarrassing goal let in by goaltender Anders Nilsson from centre ice.

You could almost hear the entire city utter the same thing immediately after that goal by PK Subban went in.

It’s easy to understand why.

A slap shot from centre ice, scored glove side during the second period at Rogers Arena from a Norris Trophy winning defenceman? If that doesn’t remind you of Nicklas Lidstrom’s goal from Game 3 of the first round of the 2003 playoffs, I don’t know what will.

Apparently the Canucks have Dan Cloutier in nets tonight lol

Shades of Nick Lidstrom and Dan Cloutier. Glove side. #Canucks

Dan Cloutier flashing back in the Canucks booth at Rogers Arena pic.twitter.com/2JrOhcgHBo

Welp, I think we can put the blame for that red line goal where it belongs: Dan Cloutier. #canucks

The curse of Dan Cloutier haunts us #Canucks

Would love to be a fly on the wall the next time Dan Cloutier and Anders Nilsson sit down for a beer. Just sayin’.