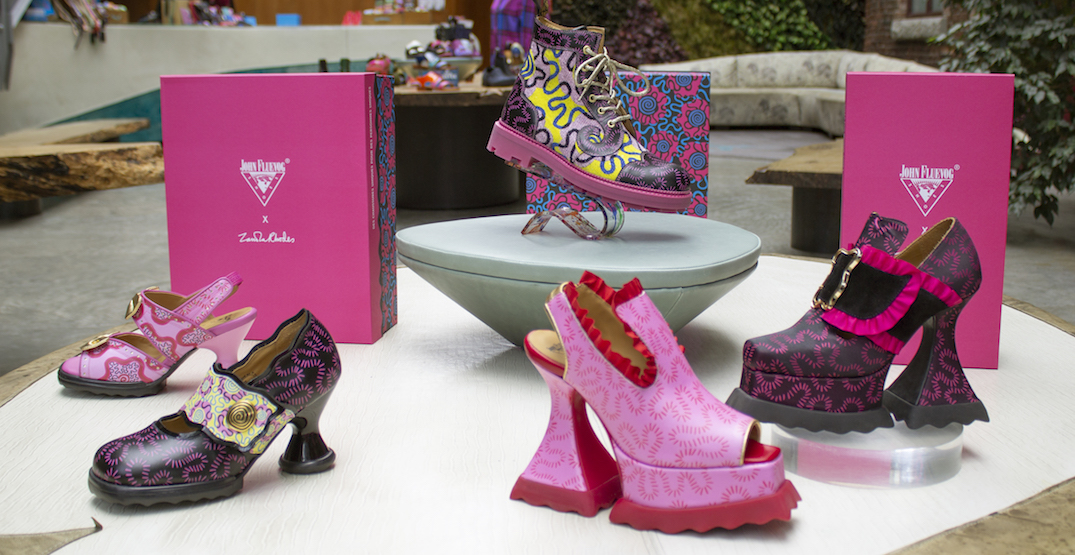 Dame Zandra Rhodes has designed outfits for celebs such as Freddie Mercury and Princess Diana, while John Fluevog’s funky footwear has been spotted on everyone from Madonna to Beyoncé. 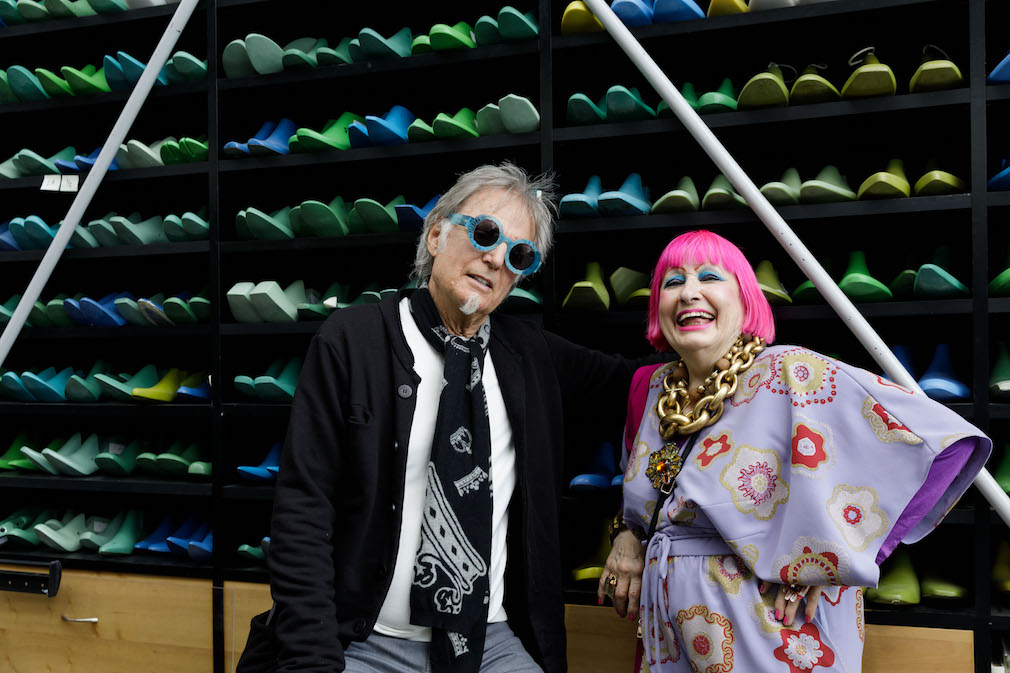 Rhodes fell in love with Fluevog shoes the very first time she saw them, about 25 years ago, while visiting New York City. She immediately bought two pairs, including some Munsters in green suede. “They were absolutely gorgeous,” she recalls. “They were my favourite pair of shoes.”

Unfortunately, when Rhodes left her UK home at Christmas, disaster struck. “A burglar got in, and he was going to take the television and some other things but couldn’t unlock the double door, but the one thing he took were my green Munsters!”

Those particular shoes clearly left an indelible mark on Rhodes: Two of the styles in the new five-piece collection are variations of the Munster. The capsule collection came about after Rhodes’ agent introduced her to Fluevog during the pandemic.

“It was like a marriage made in heaven, with all the magical things that John does, and using my prints and detailing with his existing gorgeous shapes,” Rhodes says.

“They’re the iconic Fluevog shapes,” says the based-in-Vancouver footwear designer. “Like any good collab, Zandra has added value and she’s made them much better than they were by putting her iconic art and shapes and bits on them.” He adds, “I’m very happy to be able to collaborate with such an iconic person.” 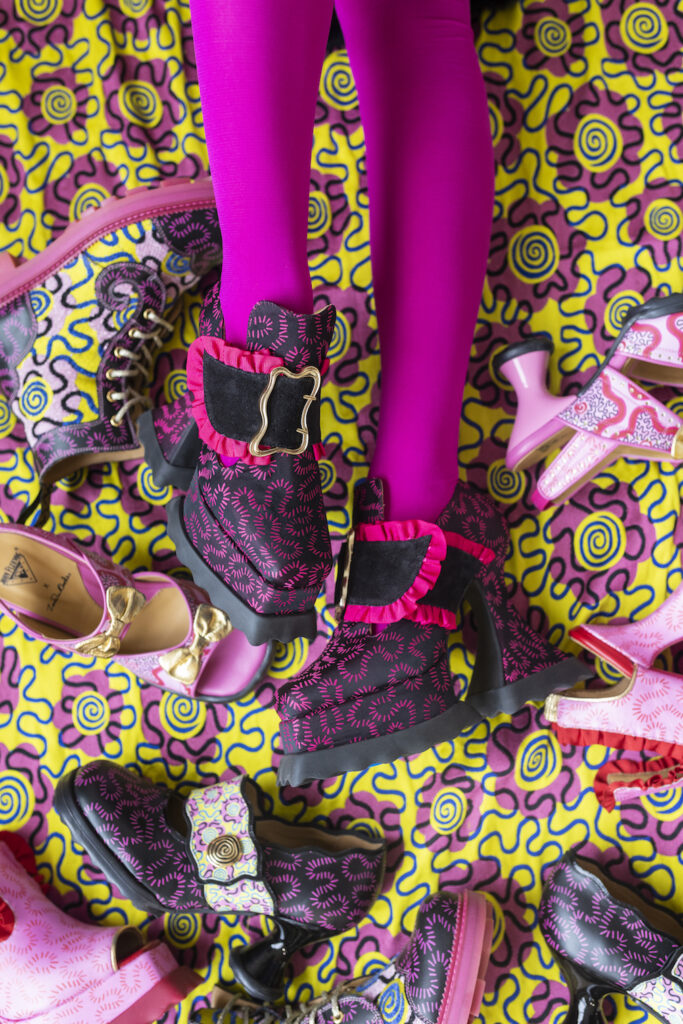 In particular, he praises her style touches such as “the wiggles and squiggles.”

Rhodes shares that “new wiggles” were dreamed up for this collection: “Not a classic wiggle but this one with little stitches on it, and then another one with the wiggles but also the flowers.” 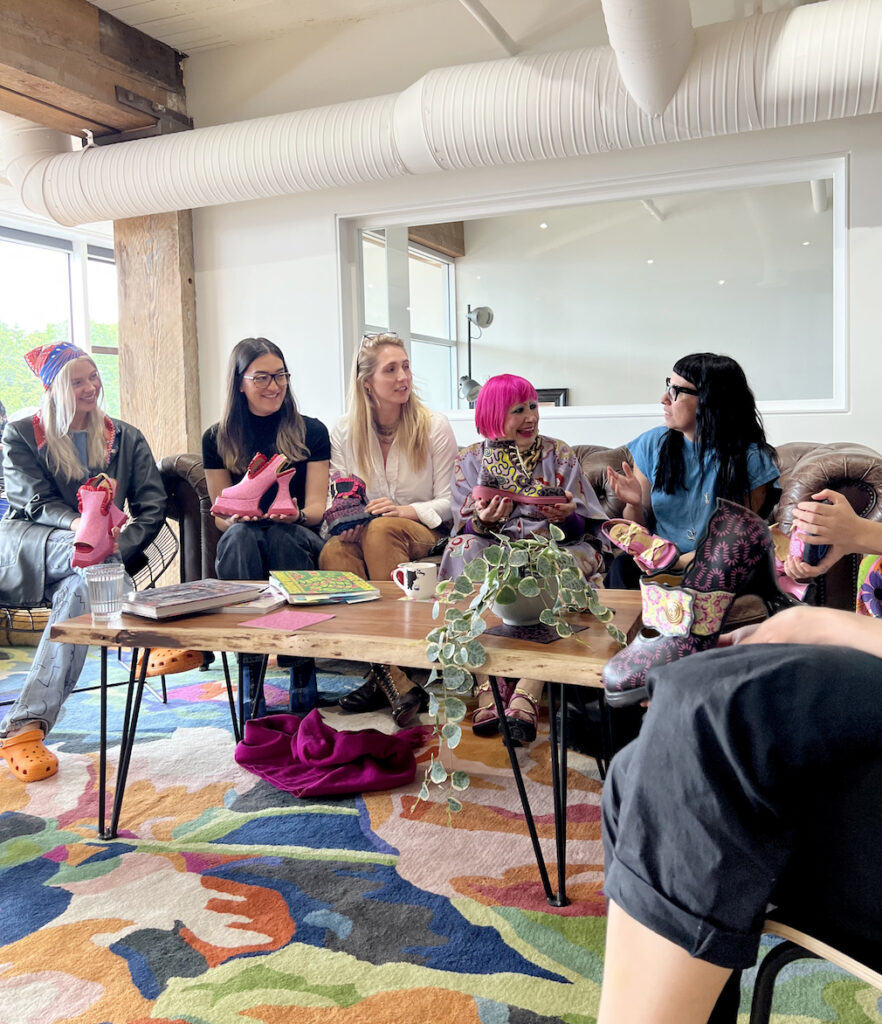 Both Rhodes and Fluevog speak effusively about how well their creative teams collaborated on the project, navigating the eight-hour time between Vancouver and London via Zoom to ultimately come up with what Rhodes describes as “a magical collection of shoes.”

“They would,” Fluevog agrees. 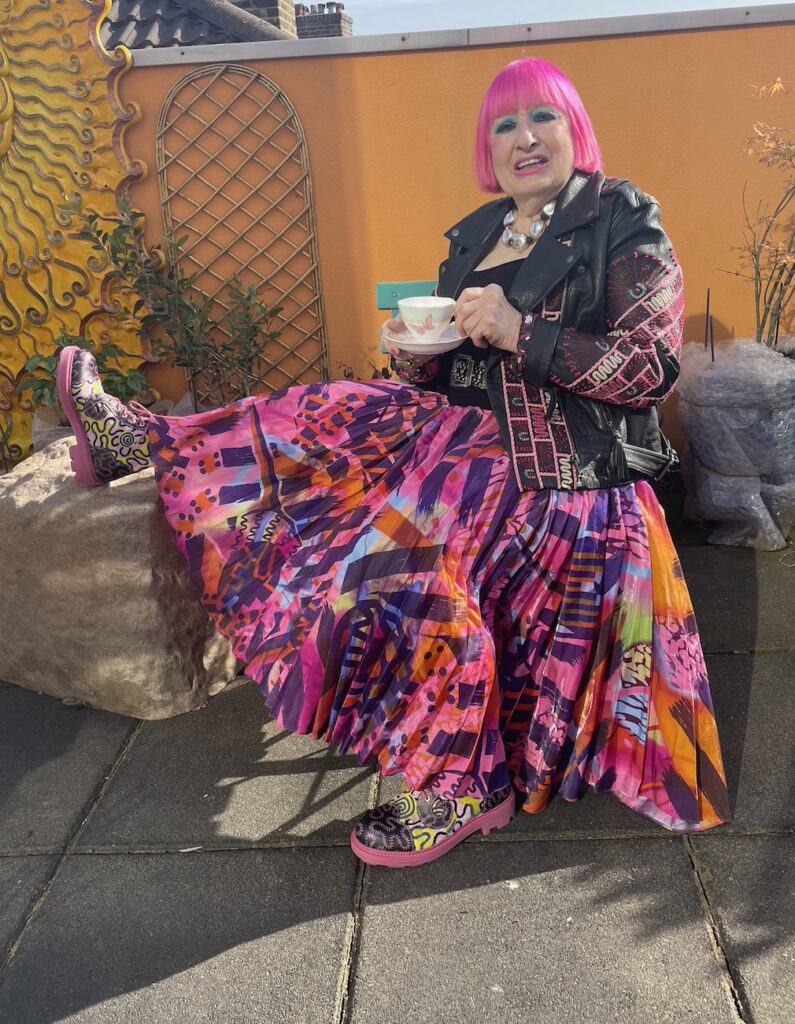 According to Rhodes, all Fluevog shoes should be treasured, like art: “People are going to think of it as a piece of sculpture that they can now and again wear, and then the rest of the time it’s going to be on display to look fabulous.”

She believes that fashion in general is moving more toward pieces that can stand the test of time. “I don’t think the world can afford to be wasteful,” she says. “You want to think of things that you’re going to wear and treasure and wear again, not wear and throw away.”

Fluevog feels the same, stating that he tries to produce enduring designs that still look good 15 years later: “They’re not only interesting in the current time that we live in, the six months that they’re in style, but they have longer-term beauty and something special about them that transcends that particular time.” 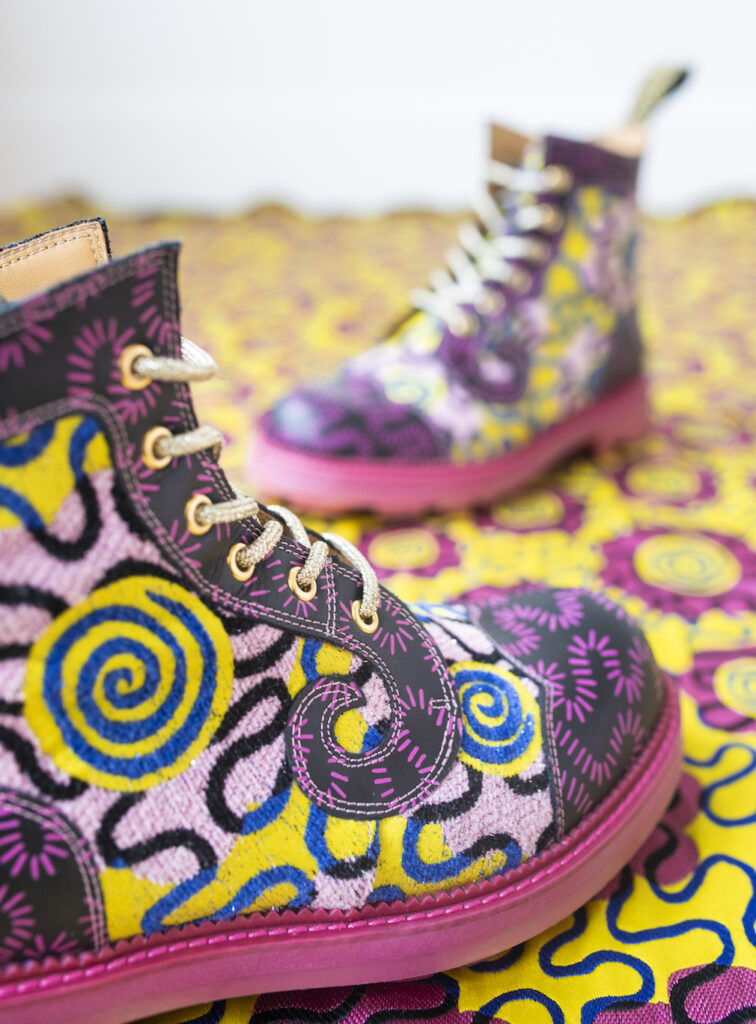 The five colourful creations in the new collection definitely have that special quality. And as for folks who feel nervous wearing such bold and bright footwear? Fluevog offers words of encouragement to them: “They need to embrace their own uniqueness and understand that they’re not like anybody else. They don’t need to look like everybody.”

It’s a topic he feels passionate about, as he emphasizes that each person is an individual. “If you’re very unique, why would you want to wear something bland?” he asks. “Why would you not want to relish your individuality and your own creativeness?” 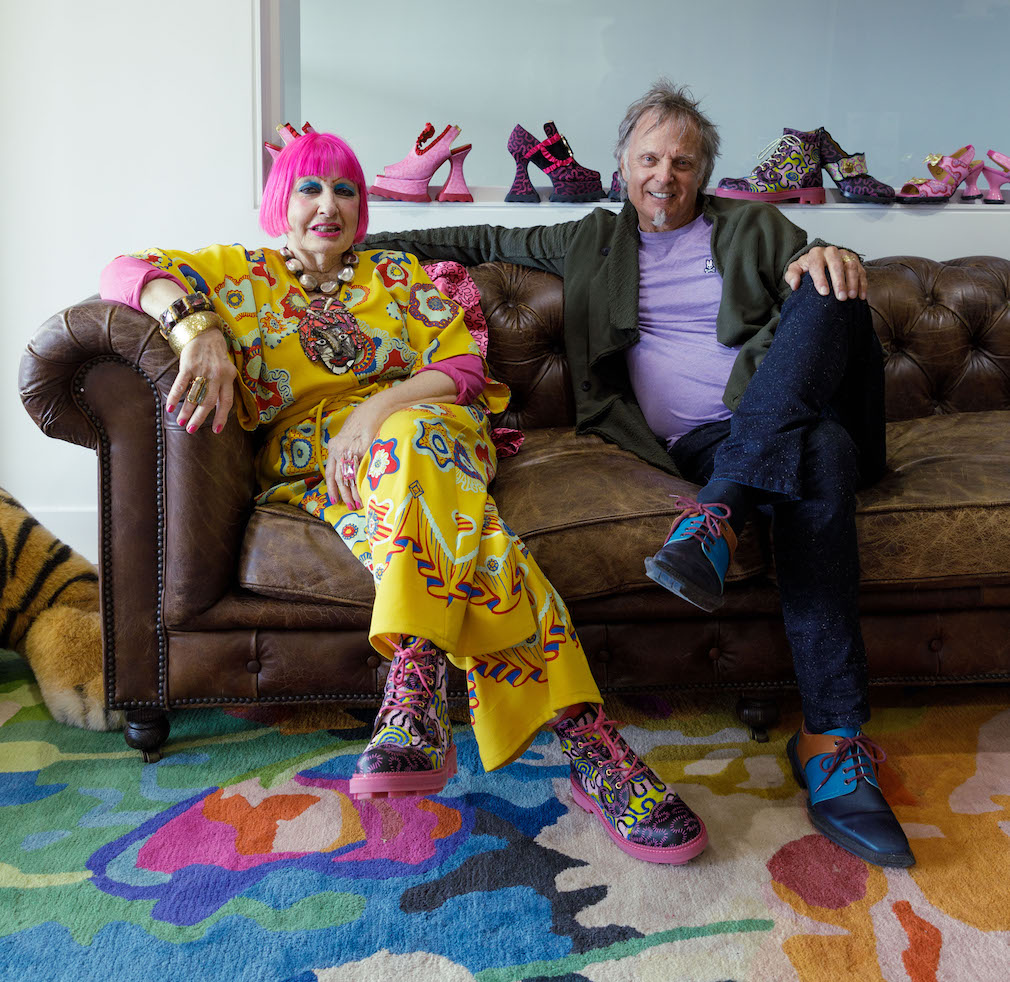 Despite each having more than half a century in the fashion biz, neither Fluevog nor Rhodes has plans to slow down.

“Fortunately, I just feel very blessed that I have a career that is endless. It doesn’t stop. There’s a zillion things that are left for me to do,” Fluevog says. “I have a team around me. I have more arms and legs that can do things than I did when I was younger.”

Rhodes feels similarly, saying, “I can’t imagine I’d retire. I like designing, and I like wearing the things I design.” 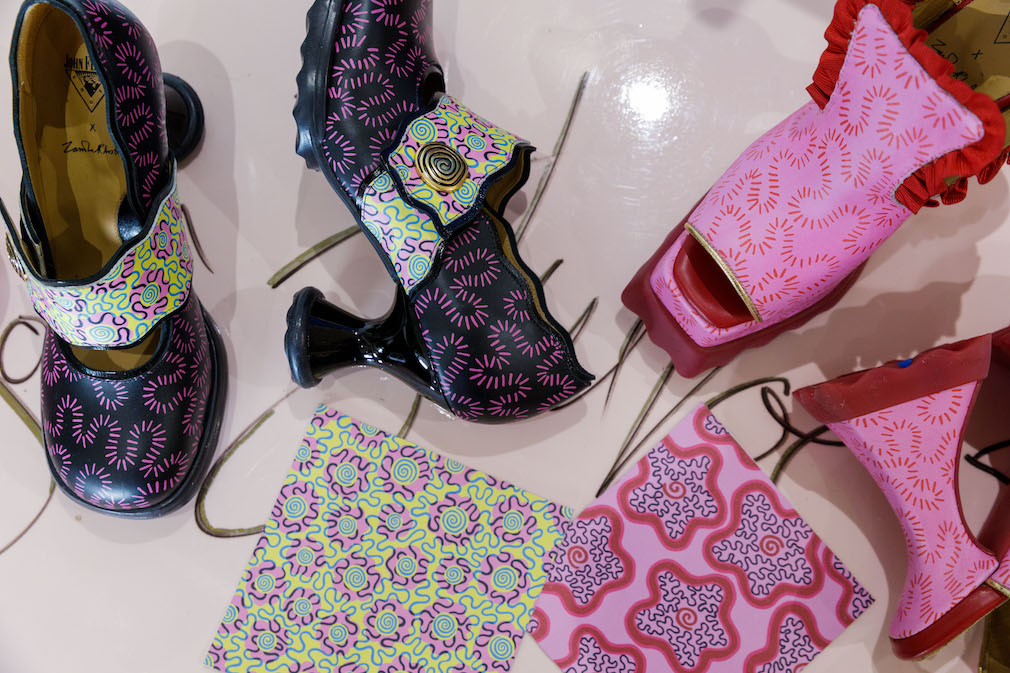