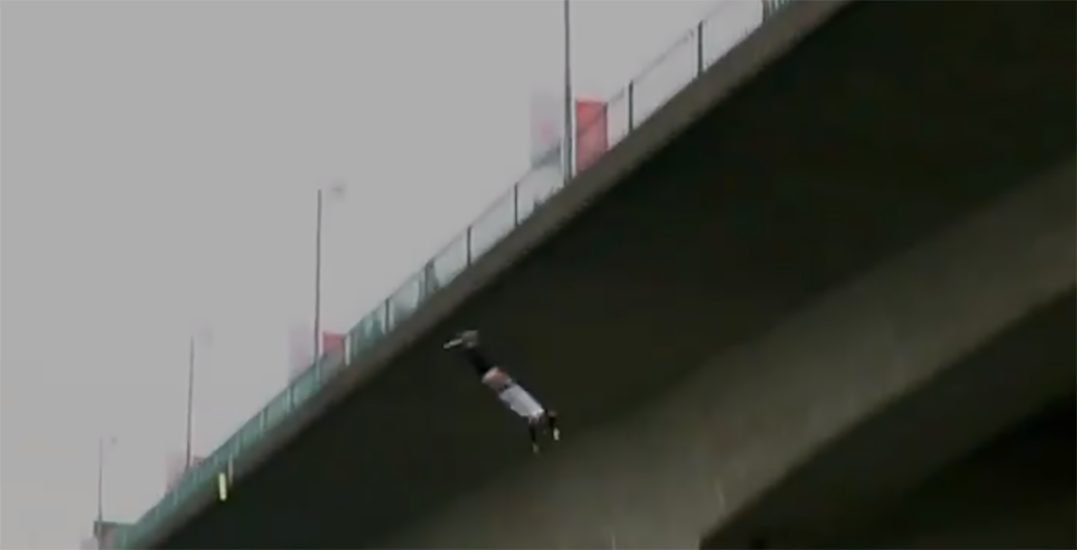 A video of a stunt backflip off of Vancouver’s Cambie Bridge is being called “extremely dangerous” by police.

The Instagram video, uploaded by thesendboyss, shows a man hanging off the edge of the bridge, which leads into downtown Vancouver.

He pushes himself off, performing a backflip in midair before hitting the water.

The Instagram page shared clips of the stunt earlier this week, although it’s unclear exactly when the video was taken.

The Vancouver Police Department (VPD) commented on the act, calling it “extremely dangerous” and in some circumstances, even criminal.

“Depending on the circumstances, they could be criminal. At the very least, they are dangerous for a variety of reasons.”

One of the reasons, according to Addison, is that they can “encourage copy-cat scenarios” or “encourage people to take life-threatening risks in their efforts to go viral.”

He also adds that situations like these can impede boat traffic or result in serious health consequences, such as cold-water shock, marine traffic, and debris on the bridge.

“There is currently a sail boat sunken under the south end of the bridge from a recent fire,” Addison notes. “A bridge jump at a particularly low tide could result in someone striking that object, or other debris under the bridge.”

This doesn’t appear to be the first time that the Instagram channel has performed stunts off of notable landmarks in Vancouver.

Older videos on their Instagram show them performing jumps off the iconic “Q” sign at Lonsdale Quay in North Vancouver, as well as a cliff in that city.