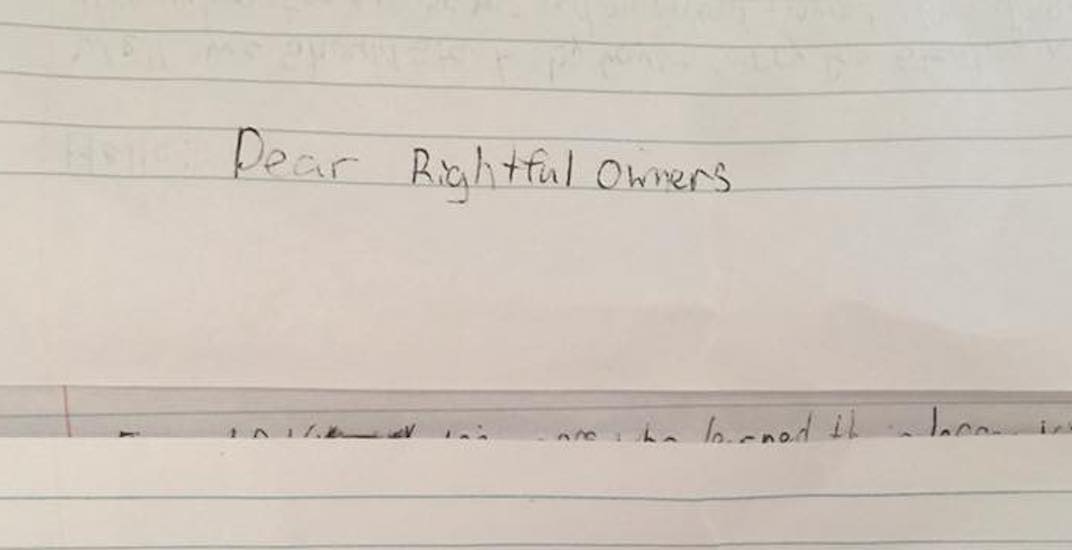 The story of a stolen dirk bike in Mission last week has proven that even thieves can have a heart.

Mel Flesher took to Facebook on July 29 with a plea for anyone who may have seen her boyfriend’s kids’ stolen dirt bike.

The yellow Yamaha 80 cc bike had been fixed up so that they could learn how to ride, but unfortunately was stolen by “some losers” that morning, and she was urging Facebook friends to keep an eye out for the dirt bike.

The post was shared and eventually found its way to the eyes of the thieves themselves.

The next morning, Flesher found the bike returned to the front of her apartment complex with a full gas tank, a new lock, and a note from the regretful bike-thieves.

They had apparently thought the bike belonged to some teenager who had outgrown it, but once they learned they’d stolen from children, remorse spurred them to redemption.

Here is what they wrote in the note:

Well we should start by saying sorry for stealing your son’s bike. Although not an excuse, me and my friend figured it would belong to some teenager who had outgrown it. When we read your Facebook post we immediately knew we had to take it back to him. We’ve bought him a new, more secure lock as the previous one was already broken. The keys are in with the bike key. For the future, take the keys inside with you. I know we aren’t really in a place to give advice but the heartbreak your son must have felt upon discovering his bike missing should never be relived. We have filled the tank and topped up the oil for him. Again we really are sorry for putting him through all this. We wish you two the best in his journeys riding and we hope you both can find it in your hearts to forgive us. Ride on little man, you deserve it!

– Regretful teenagers who learned their lesson via restorative justice.”

Flesher posted again on Facebook that morning with the good news, and wrote that she accepted the regretful teenagers’ apology.

Let’s just hope that they—and others—learned a lesson from this.