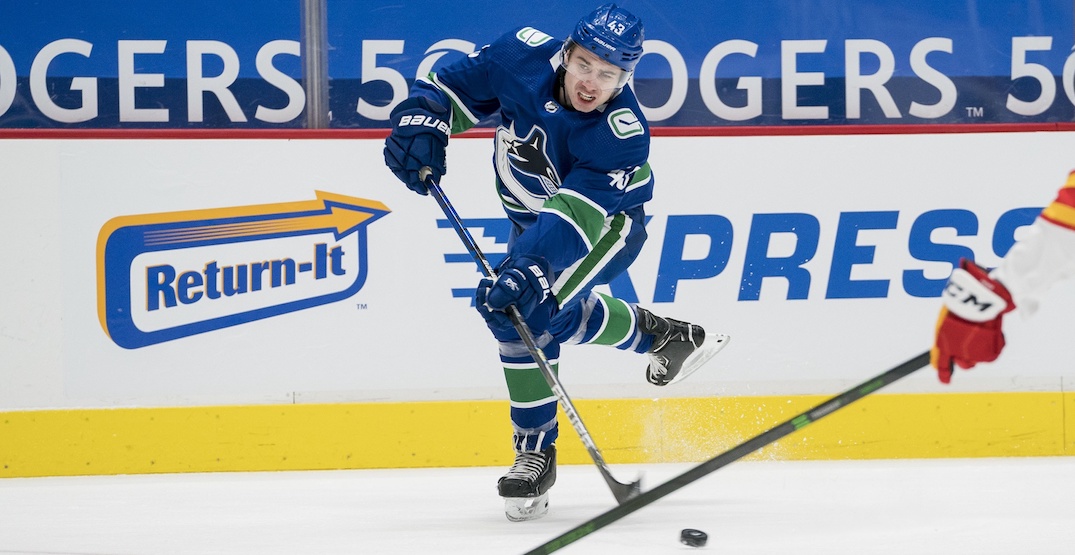 Simply put, there’s just no player in the NHL like Quinn Hughes.

Usually, Canucks fans would read that sentence and feel nothing but a rush of optimism flow through their bodies. However, there are some negative underlying elements to that statement.

The Vancouver Canucks have been the worst defensive team in hockey at even-strength. No other team has given up as many goals, shots, or scoring chances against at five-on-five (per 60 minutes) this season. That’s been exacerbated by the fact that Braden Holtby and Thatcher Demko have given Vancouver fifth-worst save percentage in the NHL.

While there are many scapegoats for the Canucks’ poor defensive play, Hughes has to be firmly in that conversation. However, he’s still proving to be just as dynamic as ever, which makes his performance 2020-21 that much more bizarre.

Here are five stats highlighting just how bizarre Hughes’s season has been.

1. No player has been on the ice for more even-strength goals-against

This one is by a long shot.

If we look at this as goals-against on a 60-minute basis, Hughes winds up as fourth-worst in the NHL, allowing 5.19 per 60.

Basically, the opposition is scoring a goal approximately once every 12 minutes when Hughes is on the ice.

That is… not good.

2. He’s one of the NHL’s leading scorers

We were all impressed when Hughes was on a 60-point pace over a full 82 games last year.

Well, he’s close to a 60-point pace once again…. even in a shortened 56-game season.

Hughes has 19 points in 19 games so far this season. That leads all defencemen, with the next closest players being Jeffy Petry and Victor Hedman, who are tied with 15 points each.

With 19 points, Hughes leads the Canucks and he’s currently tied for seventh overall in NHL scoring with Nicklas Backstrom.

The warts in his defensive game have certainly been exposed this season, and a rotating door of partners hasn’t helped. However, Hughes certainly does his best to make up for it by being one of the best offensive defenceman in hockey.

3. No player has been on the ice for more high danger chances-against

The next question that arises when you see how much the opposition is scoring with Hughes on the ice is whether the 21-year-old has been bad or unlucky defensively.

It’s been a mix of both, but you can chalk this one up in the “he’s been bad defensively” category.

brings me no pleasure to confirm thishttps://t.co/Y9b1SgECla

Hughes ranks last in the NHL, with the opposition garnering 16.5 high-danger scoring chances per-60.

In fairness, four Canucks rank in the bottom 12 of this category, including Hughes, Jake Virtanen, Antoine Roussel, and Adam Gaudette.

4. The goalies haven’t bailed him out

The Canucks save percentage while Hughes is on the ice is decisively not good.

Demko and Holtby have given the Canucks below-average goaltending, and that’s especially the case at even-strength, where the tandem has combined to post the third-worst save percentage (.892) in the NHL.

While it’s not completely Hughes’ fault that the Canucks are so permissive while he’s on the ice, it’s also not his fault that the goalies haven’t been able to give him a save.

With Hughes on the ice, Demko and Holtby have given the Canucks a save percentage of .857. Of 522 skaters to play at least 100 minutes at even-strength, that leaves Hughes’ on-ice save percentage at 507th.

The defensive side may have slipped compared to where Hughes was last year (slightly below average as opposed to one of the NHL’s worst), the offensive side of his game is arguably more pronounced.

Take this stat, for instance. So far this season, the Canucks have scored 10 power play goals at five-on-four. Hughes has registered an assist on every single one of those goals.

Quinn Hughes with the shot… 👀
Tanner Pearson with the deflection 😎

Based on Hughes’ power play proficiency, you would think the Canucks should rank better than 20th overall in the NHL with the man advantage. However, while he leads the team in power play points per-60, the likes of Elias Pettersson, Brock Boeser, and Bo Horvat all rank in the bottom half of the NHL.