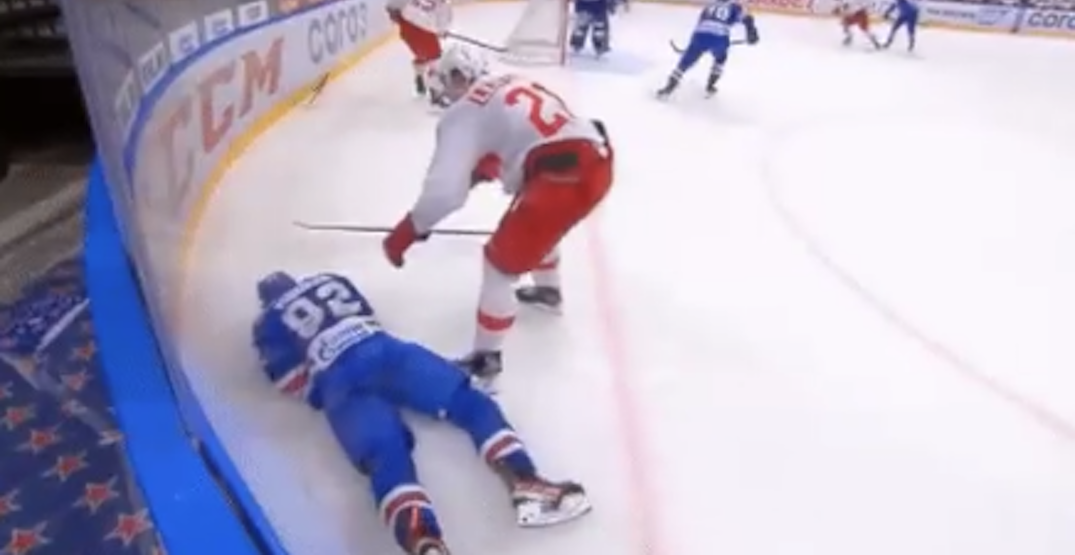 Vasily Podkolzin took a nasty hit to the head today, forcing him to leave his KHL game with an injury.

The 19-year-old Vancouver Canucks prospect took a shoulder to the head from 6-foot-2 former NHLer Jori Lehtera and was slow to get up. Podkolzin never saw the hit coming, as Lehtera caught him from the blindside, just after the young Russian spun away from another player after moving the puck.

Vasily Podkolzin takes a shoulder to the head and needed to be helped off the ice. I'm no doctor, but that was a bad scene to watch him be carried off the ice by teammates and then they showed him being held up in the tunnel by the medical staff. pic.twitter.com/zwq7tS4UME

Vasily Podkolzin is out for the remainder of the game. pic.twitter.com/cBuA9xhyqH

Podkolzin was slow to get up, needed help getting off the ice, and according to Chris Faber of Canucks Army, he left the game and didn’t return.

#92 Vasily Podkolzin took a head shot and had to be helped off the ice and went to the dressing room. 🙁 It looks like a concussion. pic.twitter.com/O8d5J4EgUN

The Canucks have high hopes for Podkolzin, who was their 10th overall selection at the 2019 NHL Draft. Team owner Francesco Aquilini included the two-way winger in his series of tweets over the weekend, saying, “our hockey group believes Podkolzin will step right into the lineup.”

Podkolzin is eligible to join the Canucks after his KHL season ends, assuming he is not picked to play in the IIHF World Championships. If all goes well, he could join the Canucks before the end of the NHL season, which concludes on May 8.

The Moscow native has 11 points (5-6-11) in 33 KHL games with SKA St. Petersburg this season. He also scored four points (2-2-4) in seven games at the World Juniors in Edmonton.