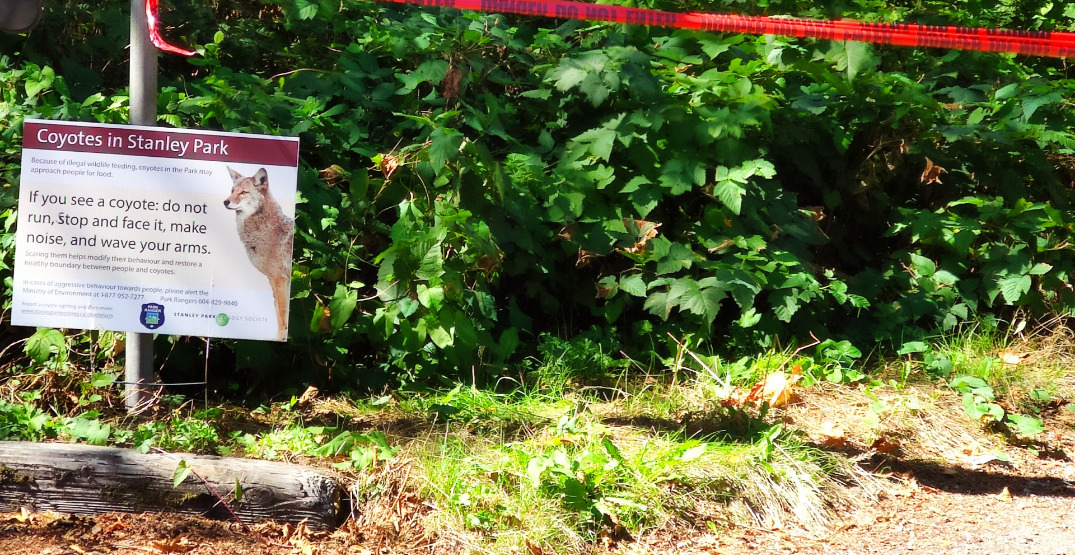 BC Conservation Inspector Drew Milne told Daily Hive that over the last nine months, they have verified 45 coyote attack reports in Stanley Park, five of which involved children. A number of attacks are believed to have gone unreported.

The BC Conservation Officer Service (COS), along with Park Board General Manager Donnie Rosa, shared some news about what steps they’ll take going forward to protect the public from coyote attacks in Stanley Park.

One hundred new signs will be installed in the park, offering guidance to the public on how to behave around coyotes.

The nightly closure is expected to last at least several weeks.

The update comes less than 24 hours after three coyote attacks occurred overnight in Stanley Park, two of which involved children being attacked. Milne said the children are in good spirits and will make a full recovery.

One of the attacks occurred after 5 pm, before the park closure, at Brockton Oval.

Conservation officers were able to lure the coyote by shaking a container that had food in it. The coyote was subsequently killed.

Education of the public is the first priority as next steps are determined, as conservation officials believe that the coyotes have become food-trained and are being fed by the public for the sake of pictures.

“We are working directly with the conservation authority as well as the province, to make sure we’re doing everything we can to support their efforts, and making sure people are safe in here,” said Rosa.

“We feel horrible about the people who have been on the receiving end of the attacks,” she added.

Milne also believes that people are feeding coyotes because they feel a sense of responsibility or duty to do so.

No decision has been made when it comes to a coyote cull or removal. COS also does not have a concrete number on the size of the population of coyotes in the park.

The COS is working with wildlife biologists from the Ministry of Forests, Lands, Natural Resource Operations and Rural Development, who are responsible for managing wildlife, to decide the next steps in managing the situation.