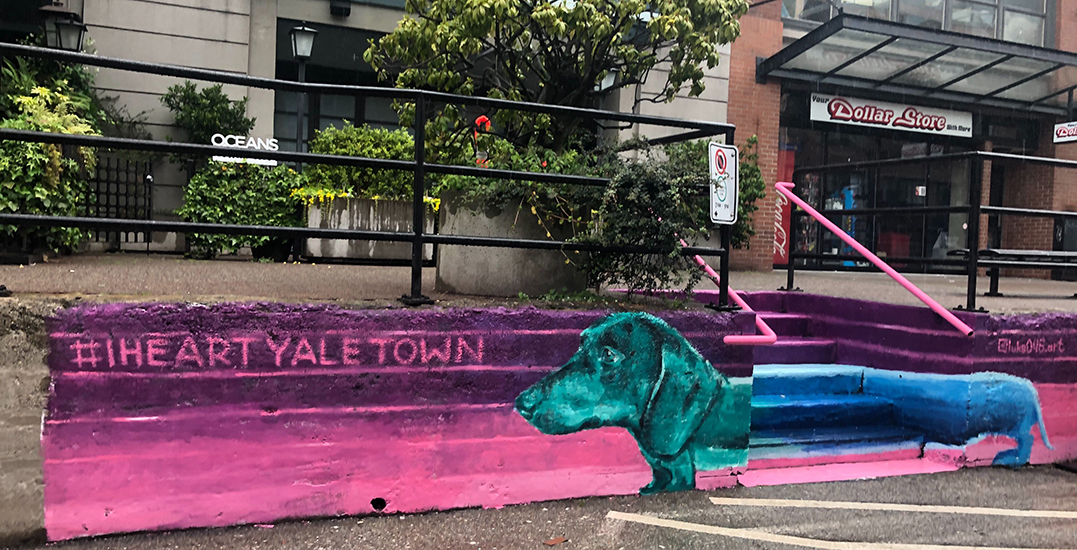 Over the course of the summer, Yaletown will transform its many staircases into vibrant, eye-catching murals, the first few having already seen completion.

The staircase murals are part of a large-scale art project launched by the Yaletown Business Improvement Association (YBIA), with intentions of brightening up the community and supporting local artists.

The first completed piece is a giant dog mural painted by Lukas Lundberg. In addition to this recent Yaletown creation, Lundberg took part in the Vancouver Mural Festival’s #MakeArtWhileApart initiative. He also has an indoor mural at Tequila Cocina, a recently-opened Mexican restaurant in North Vancouver. 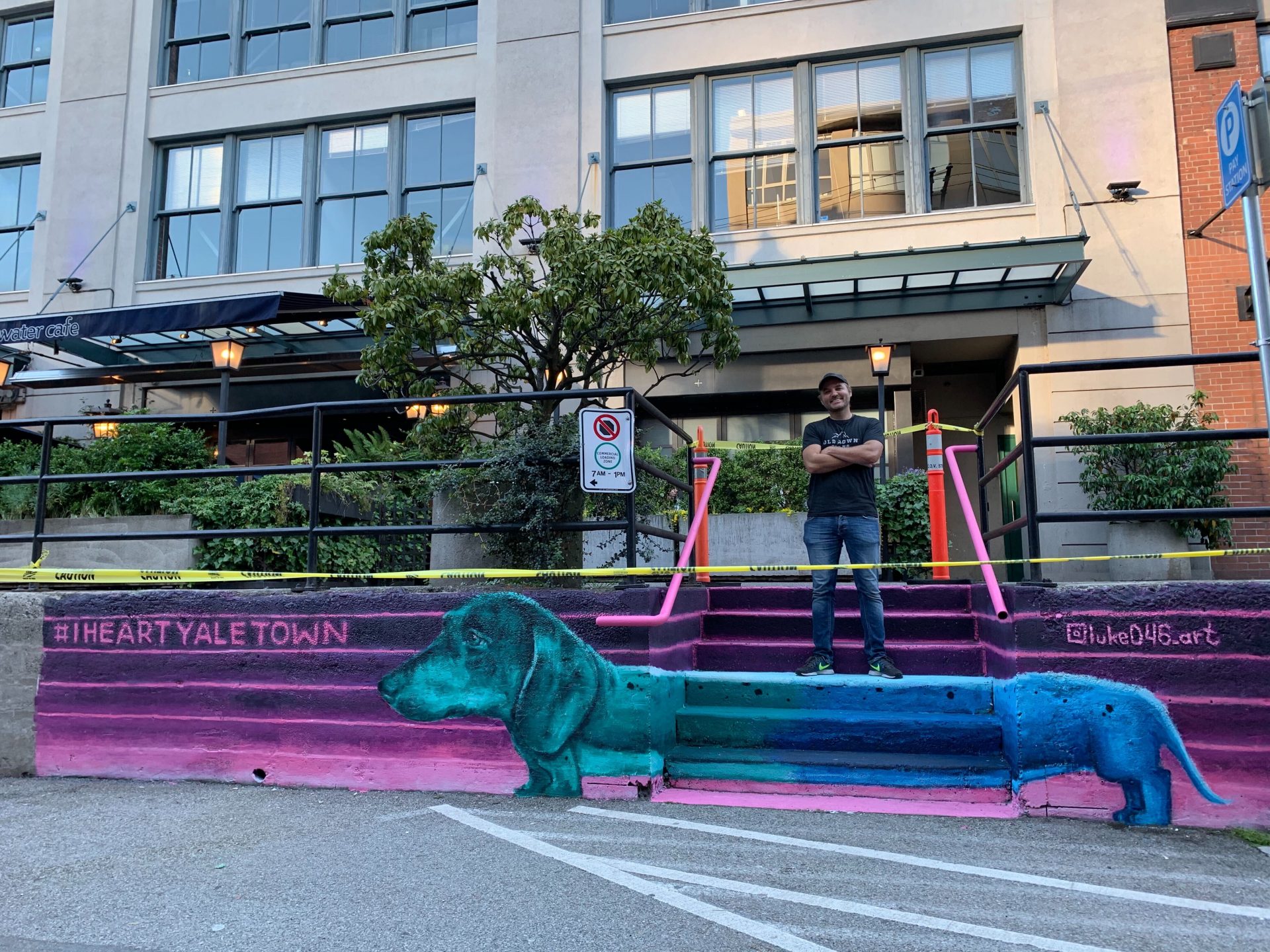 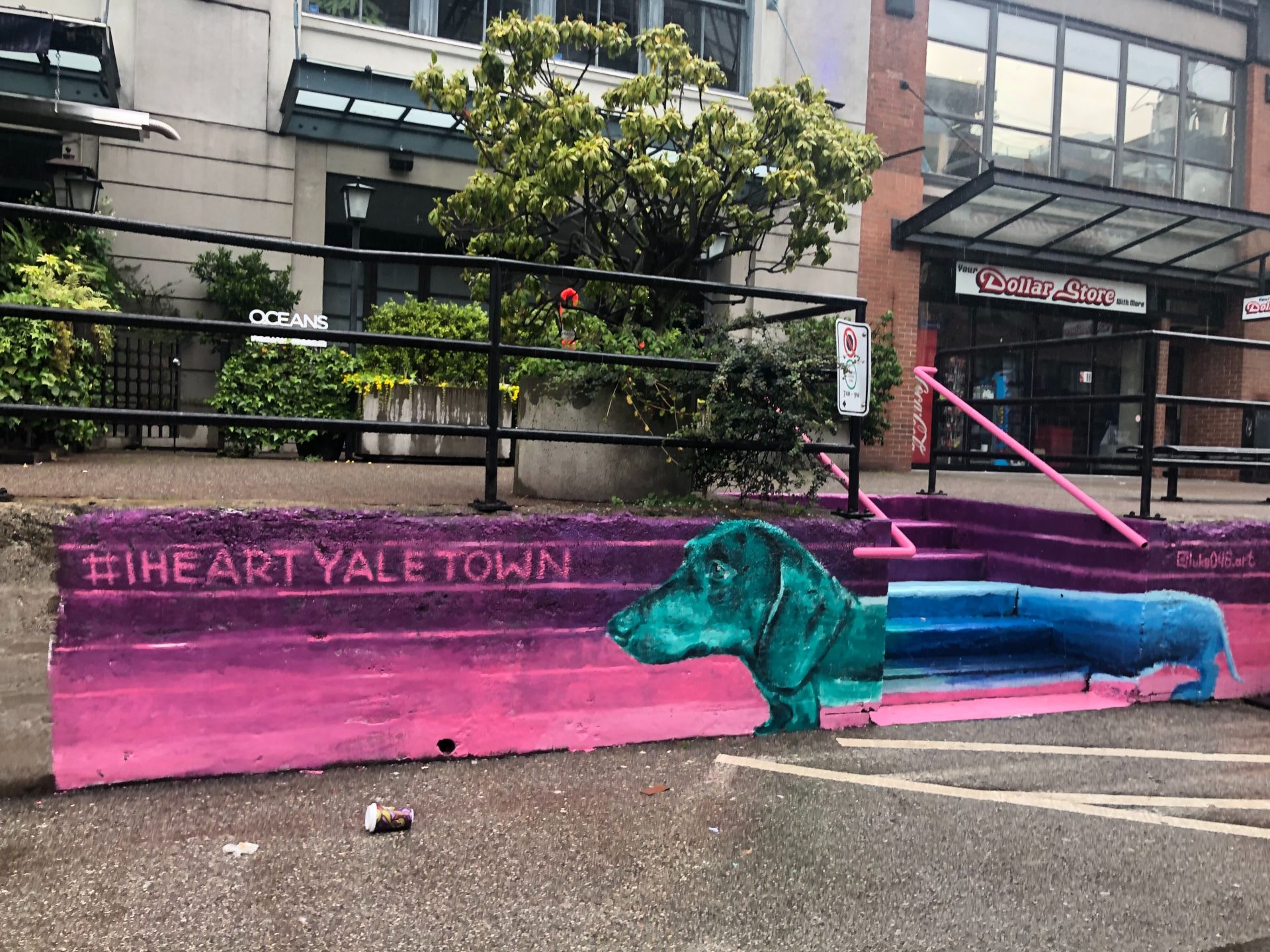 The second is Talavera, a patterned mural painted by Ari de La Mora. De La Mora’s piece was inspired by traditional Mexican craft art, which often can be found on pottery and tiles.

According to the YBIA, when Talavera pottery is given as a gift, it typically includes a positive message to share with the other person. 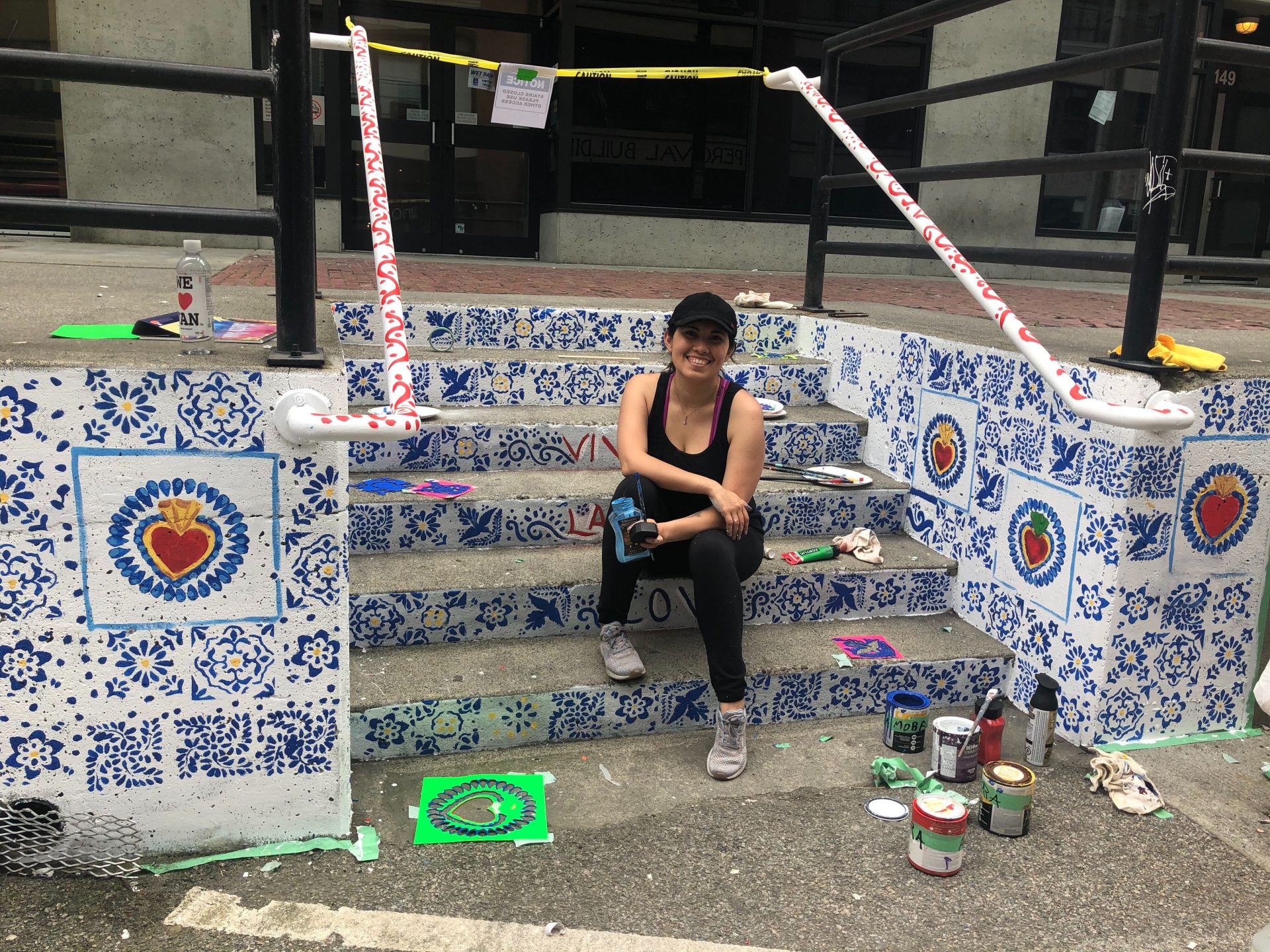 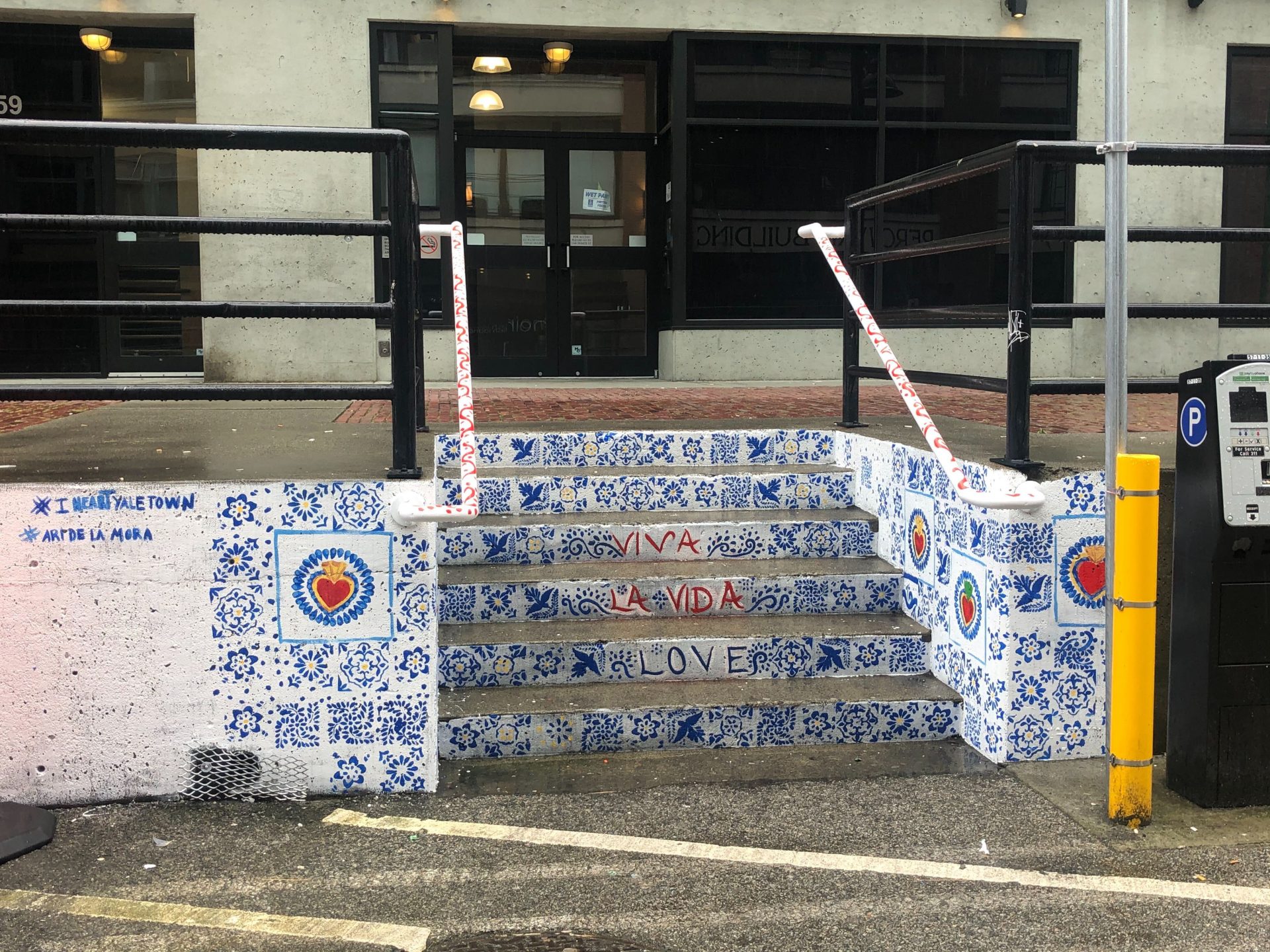 Other works include a recently-completed staircase mural by East Vancouver illustrator and designer Jayeson Lyonns, better known as Paper Tractor. Lyonns spraypainted a playful orca mural that fully aligns when the viewer is walking towards the staircase. 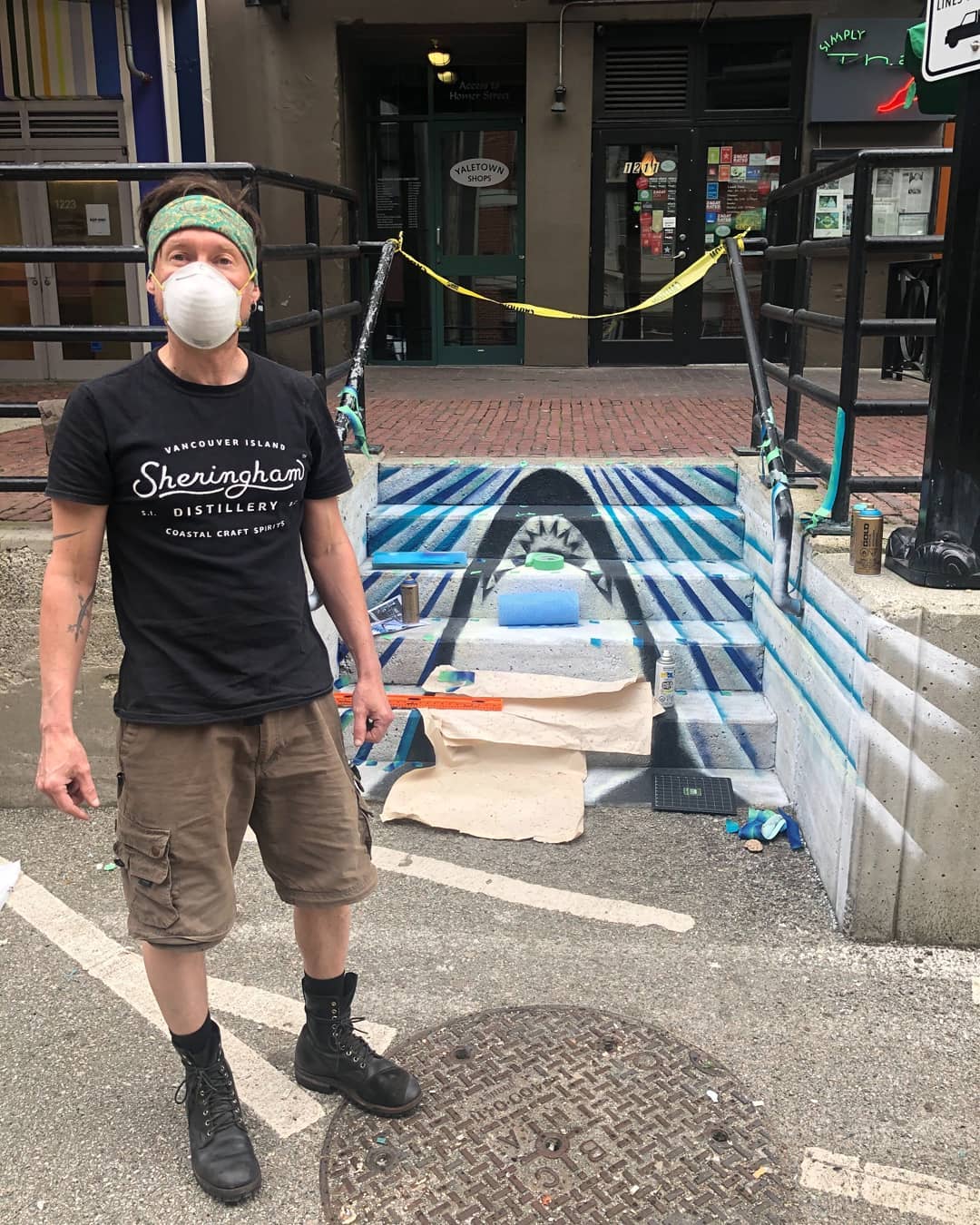 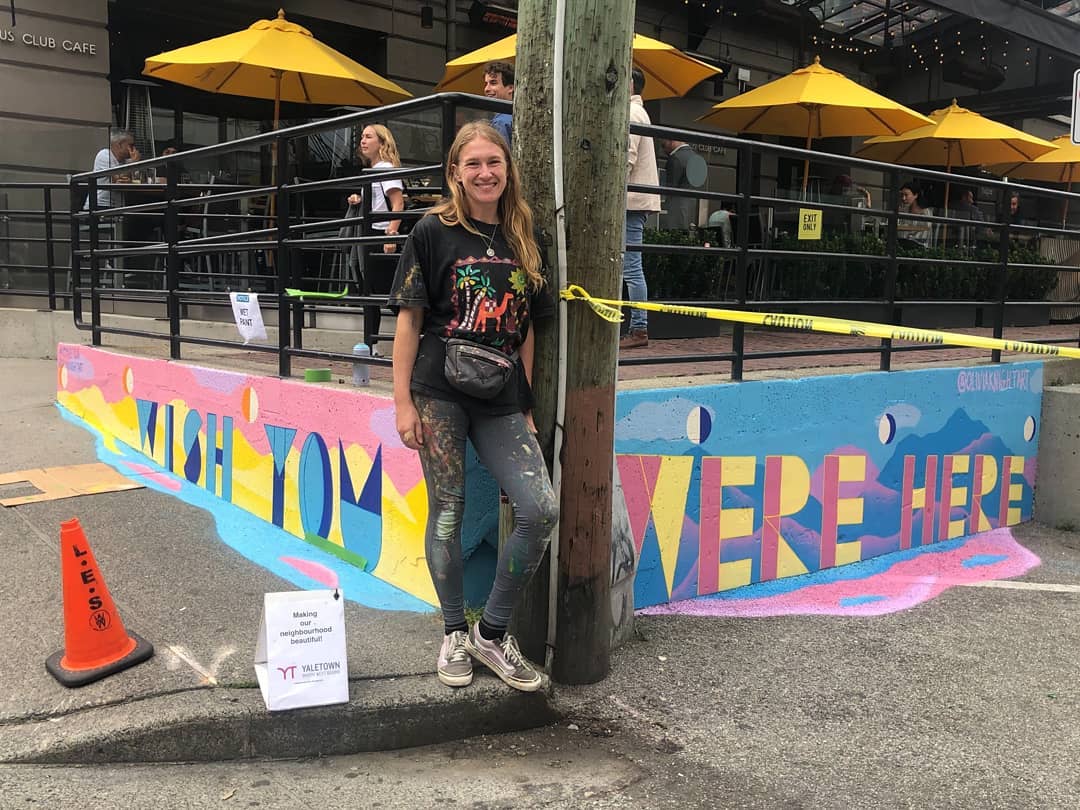 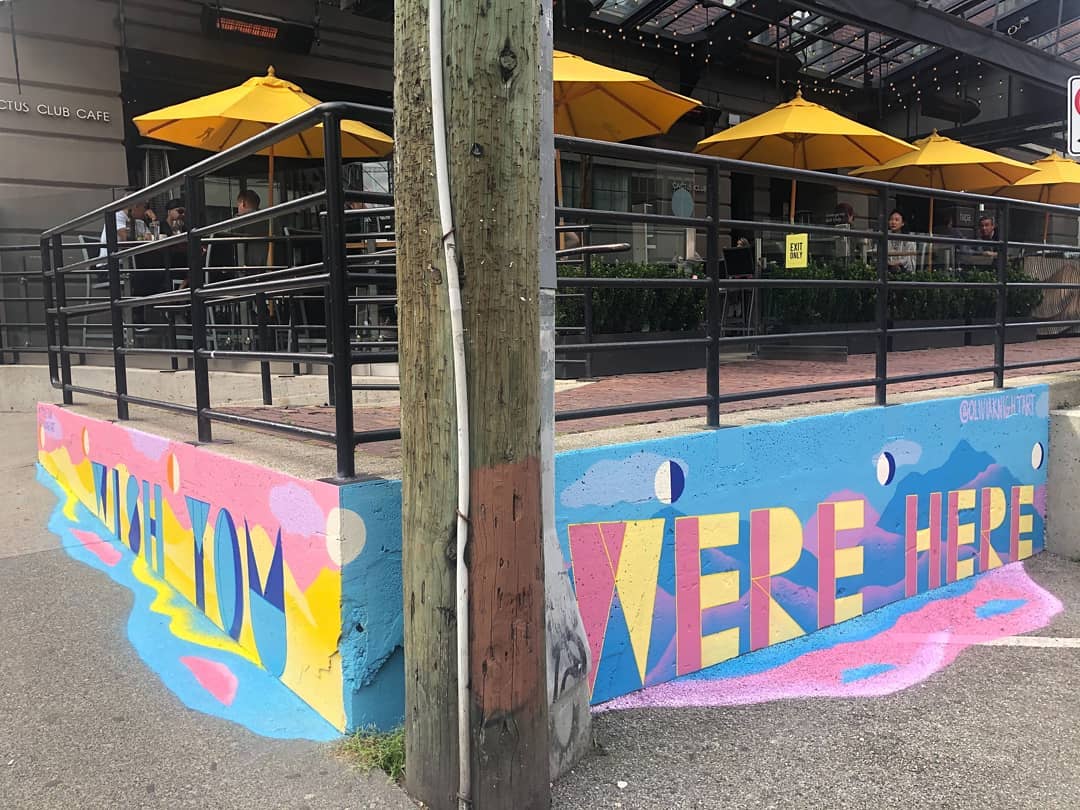 Anette O’Shea, executive director for the YBIA, says that these murals are just the start of what the association has planned for the project. When many of the boarded-up storefront murals went down, they approached a number of artists and asked if they wanted to create a more lasting piece of work.

“We’ve got a lot of neighbourhood excitement,” O’Shea tells Daily Hive in an interview. “I’ve had a number of phone calls and visited people who want to do theirs. It looks like we’re going to keep going.”

There are 20 staircases in Yaletown which used to be part of railway loading docks.

“The brick patios were actually the backs of warehouses,” she says. “Trains went down Hamilton and Mainland Street and offloaded onto the raised loading docks.”

And while there are plenty of staircases to be transformed, each poses a challenge for artists in terms of creating mural art.

“We have little staircases which are super challenging for mural art,” says O’Shea. “They’re 3D and not on a single surface. But you can play with them and because they’re short, they’re a little secret.”

The Executive Director says that the mural project has been on her bucket list for many years, although it’s taken a “couple of years for Vancouver to wake up” to murals. There’s no specific theme to follow, the murals simply need to be “interesting and fun.”

“Some are interactive, some are just gorgeous,” says O’Shea. “If you can interact with art, then it’s reaching you.”

O’Shea wanted artists to take advantage of the staircases, opting for interactivity with their designs. So far, the YBIA has more than 10 artists who are slotted to create murals, with businesses and residents stepping in with additional ideas.

When asked if there was the desire to transform all of Yaletown, O’Shea said “why not” adding that weather had been one of the biggest constraints so far.

“I just need five days in a row without rain and I haven’t had it,” she stressed.

The YBIA also hinted at a temporary patio that would be coming to the area of Helmcken Street, with intentions of turning it into a permanent attraction. With any luck and a little dry weather, Yaletown should see a colourful and bright transformation in the near future.