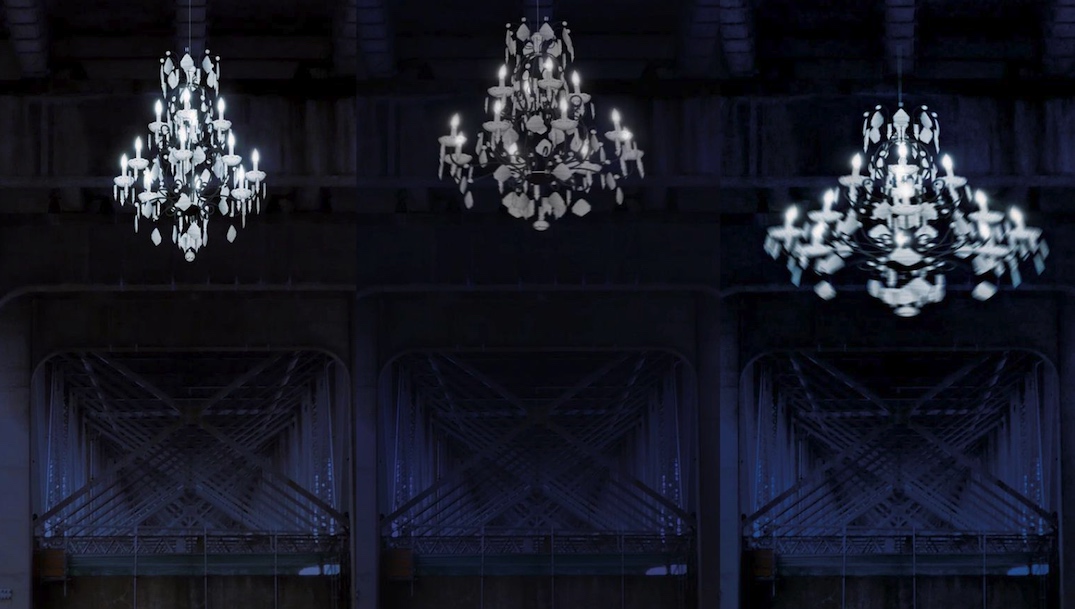 Over time, a new permanent public art piece suspended on the underside of the north end of the Granville Street Bridge has the potential of gaining the same level of attention received by the famous Gastown Steam Clock.

The massive Spinning Chandelier, measuring 26 ft in height and 14 ft in width, is set for installation on the underside of the bridge deck — directly over the intersection of Beach Avenue — as a part of the public realm enhancements being made by local developer Westbank for their Vancouver House tower redevelopment, which is now nearing full completion. 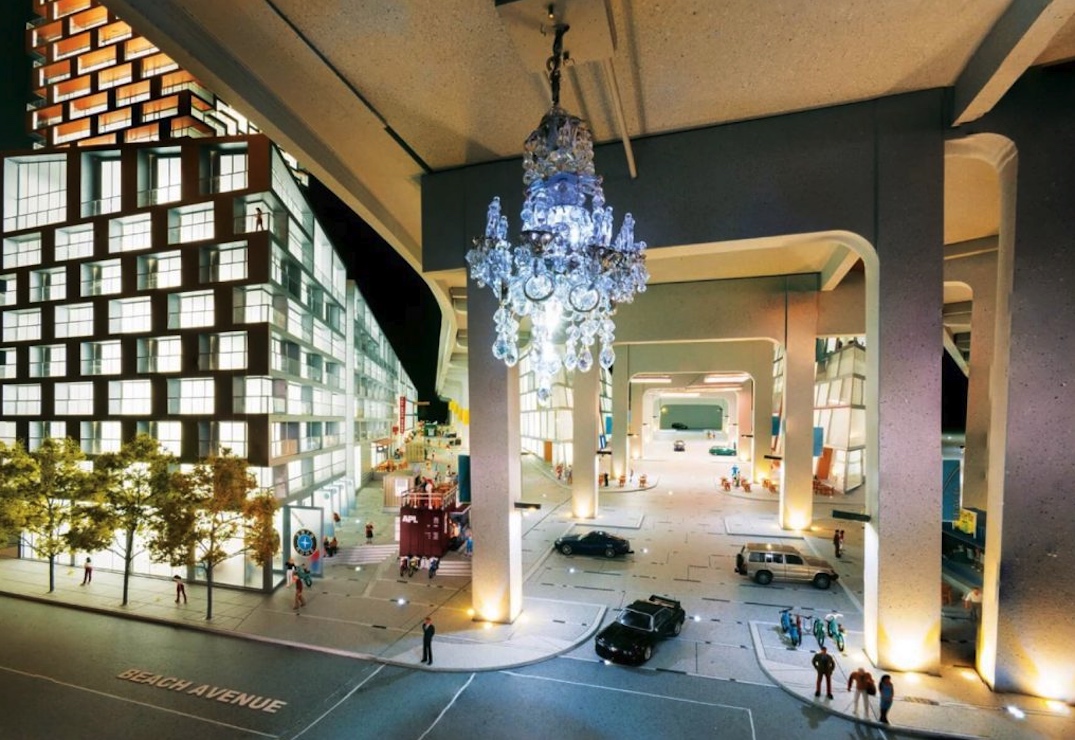 Model of Vancouver House, the new public realm under the Granville Street Bridge, and the Spinning Chandelier. (Westbank)

In a release, Westbank says the kinetic chandelier will be publicly unveiled on-site on Wednesday, November 27, 2019 at 6:30 pm by acclaimed local artist Rodney Graham.

It weighs over 7,500 lbs and is constructed of stainless steel, LED lamps, and over 600 polyurethane faux crystals.

Like the Steam Clock, the Spinning Chandelier’s activity will be scheduled to ensure its predictability to the community and tourists. The chandelier will descend twice a day at a fixed time, releasing and spinning rapidly before ascending back to its starting point.

“These dramatic daily performances are set to transform the unused underbelly of the Granville Bridge, adding an indelible new feature to Vancouver’s civic landscape while introducing a provocative new concept for public artwork globally,” reads the release. 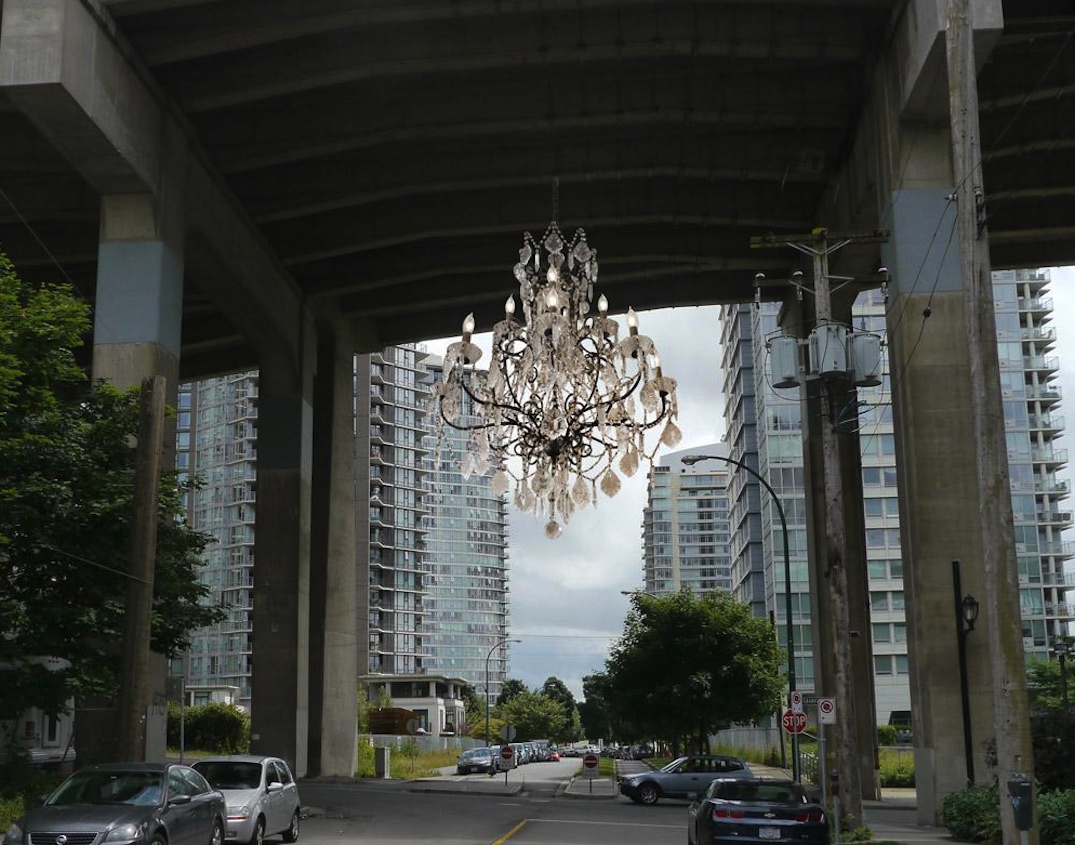 Graham’s design is inspired by his 2005 35-mm-film installation Torqued Chandelier Release, which depicts an 18th-century crystal chandelier after it is “wound up on a rope and released.”

Vancouver city council approved the public art piece’s installation in 2015. With the city’s approval, Westbank then contracted Washington State-based Walla Walla Foundry to design and manufacturer the sculpture, which was a three-year-long process.

The developer is covering the $1.2 million cost of designing, manufacturing, and installing the public art piece, as well as its regular maintenance.

Extensive public realm treatment under the bridge and between Vancouver House’s three buildings, turning the space into a pedestrian-oriented and event-friendly space, will activate the area, providing a new southern anchor for Granville Street on the downtown peninsula.

This space will be further activated by 85,000 sq. ft. of ground-level retail and restaurant space, including London Drugs, Fresh St. Market grocery store, and Momofuku Noodle Bar. Five permanent container shipping retail units will also be placed at the entrances into this new public space.

Within the podium levels, there is also over 70,000 sq. ft. of premium office space. The tower portion of the project contains 375 market condominiums and 105 market rental homes. 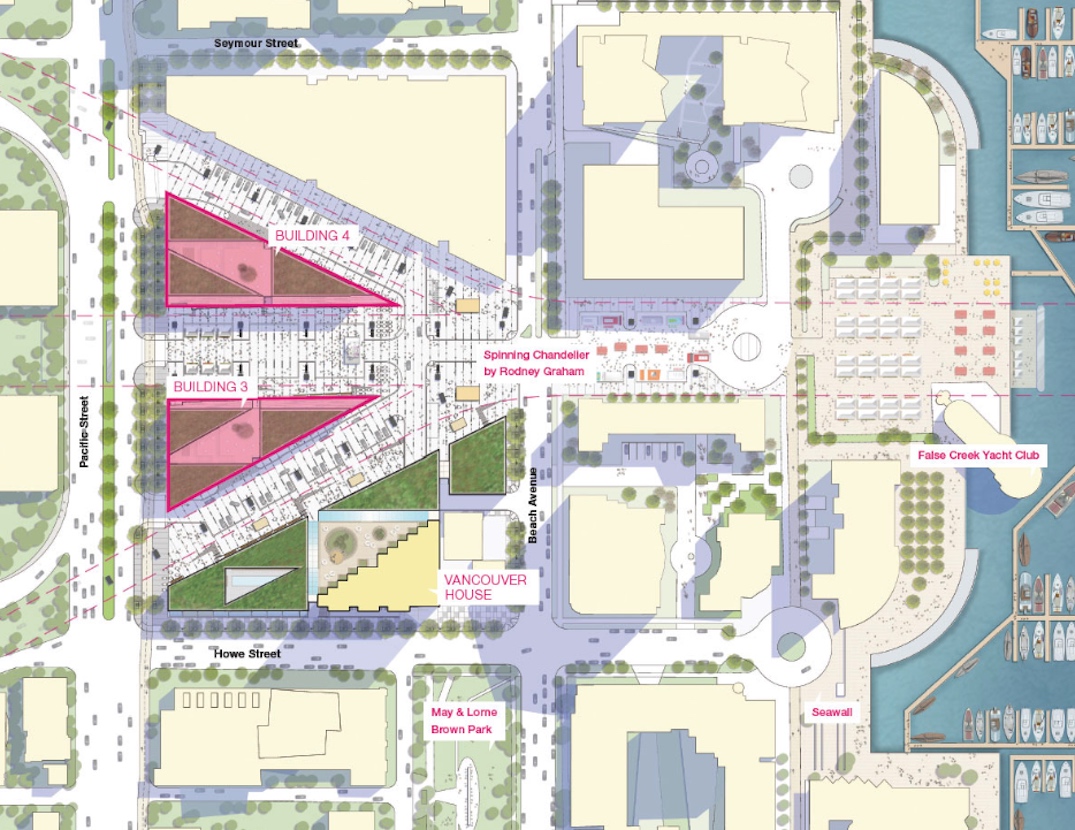 Site plan of Vancouver House and the new public realm under the Granville Street Bridge. (Westbank)

To achieve a larger floor area within its tight footprint next to the bridge, Vancouver House’s landmark 493-ft-tall, 49-storey tower begins as a 6,000-sq-ft triangular base and transitions into a 14,000-sq-ft rectangular building as it rises. It is one of the two gateway towers into downtown conceptualized by the municipal government for the north end of the bridge.

Danish architectural firm Bjarke Ingels Group is behind the design of the $750-million redevelopment.