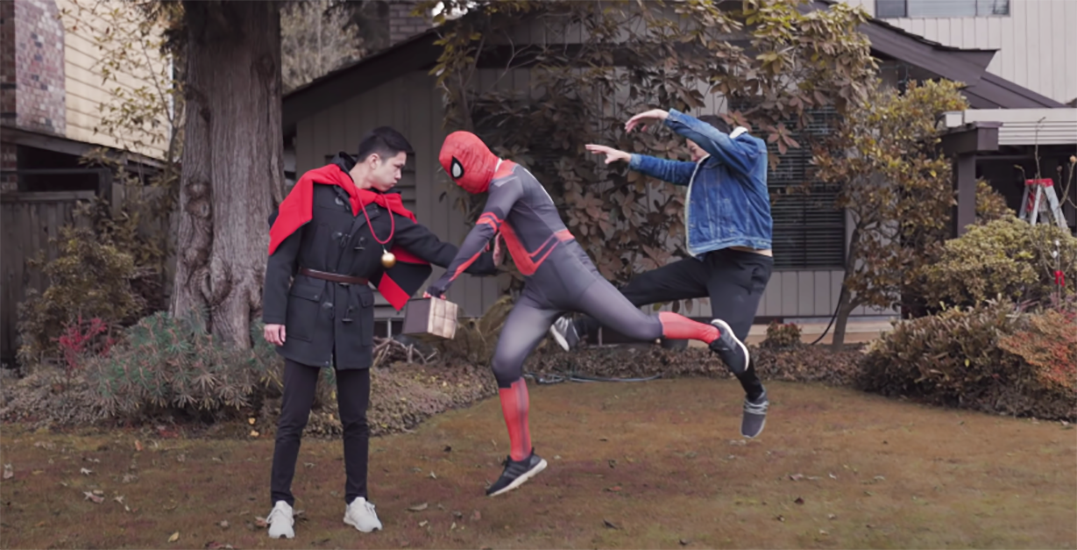 A filmmaker in British Columbia has gone viral after recreating a low-budget version of the Spider-Man: No Way Home trailer.

Albert Leung is the creative director and founder of a production company called Apic Productions. He’s been in the film industry for five years and tells Daily Hive that he’s always wanted to try recreating a film or television trailer.

The low-budget rendition involves the work of five people, including Leung, who did most of the planning and editing. The process of filming the entire trailer took nearly one full week.

“The whole shoot took six days on and off, but it was mostly after work hours when everyone was free,” Leung explains. “Since the shoot was indoor and outdoors, we had to be in standby mode and wait till it wasn’t raining, then go out before the sun goes down.”

The entire trailer was broken down into individual shots; then Leung and his team planned different scenes and how they could be recreated. After each day of shooting, Leung would spend one to two hours editing the footage, for a total of 10 to 12 hours of editing.

The entire budget of the trailer, which was $38.84, went into purchasing a Spider-Man costume.

As for the biggest technical challenges of recreating the trailer, Leung says it came down to being creative and finding a way to replicate some of the visual effects.

“We had to be creative about the shots that we didn’t have access to, like the fancy drone shots or where Dr. Strange pushes Peter Parker out of his body,” he explains.

But by all indicators, the trailer was a massive success. As of Monday morning, it had over 1,194,000 views on YouTube.

And while Leung wasn’t expecting the project to gain this much traction, he’s happy that people could have a good laugh.

“I kind of expected maybe 10,000 views and I’d be happy, but I’m really stoked about it,” he says. “People are liking it, and they’re having a good laugh.”

As for his favourite part of the entire project, he says it was “getting to work on a passion project with [his] partner and friends.”

“It’s not something we get to do at work because we mostly do weddings; this is a complete throwback to how we started this company, doing passion projects and films without any budget concerns or clients. Just everything we get to plan and go as we see fit.”