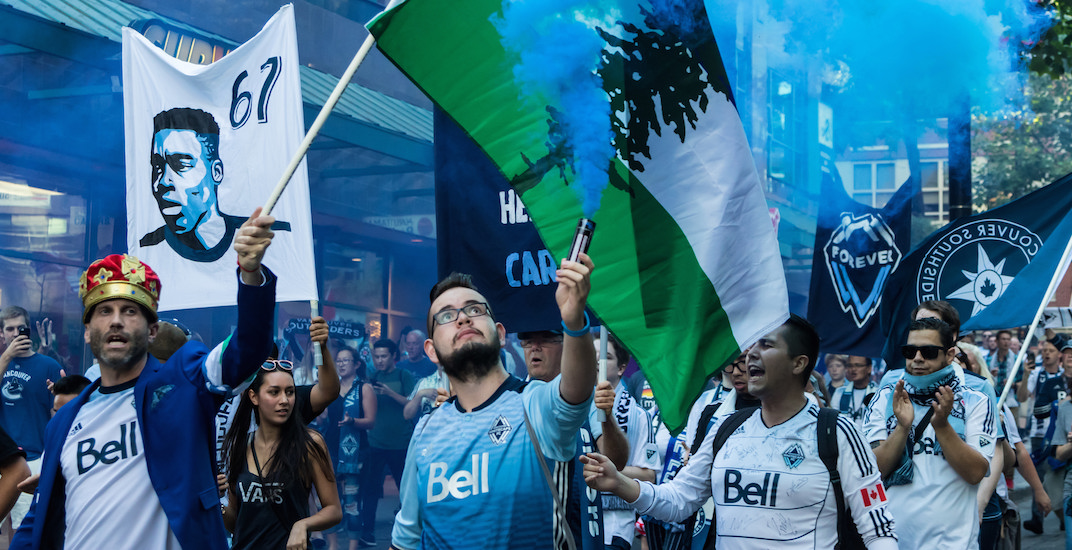 “Be a part of the best sporting atmosphere in Vancouver.”

That’s been an effective phrase used by Whitecaps FC to sell tickets to soccer games in Vancouver since entering Major League Soccer in 2011. Non-soccer fans may not know the names of all the players on the pitch, but they know it’s going to be a great atmosphere.

Far and away the biggest reason for that atmosphere is the club’s largest and oldest supporters group: the Southsiders. Founded in 1999 when the team was known as the Vancouver 86ers and played at Swangard Stadium in Burnaby, those fans at the south end of BC Place you see singing, chanting, and waving flags have helped the Whitecaps become cool in the city.

To understand what they’re all about, I decided to join them for a day during Wednesday’s Cascadia derby match against the Seattle Sounders. 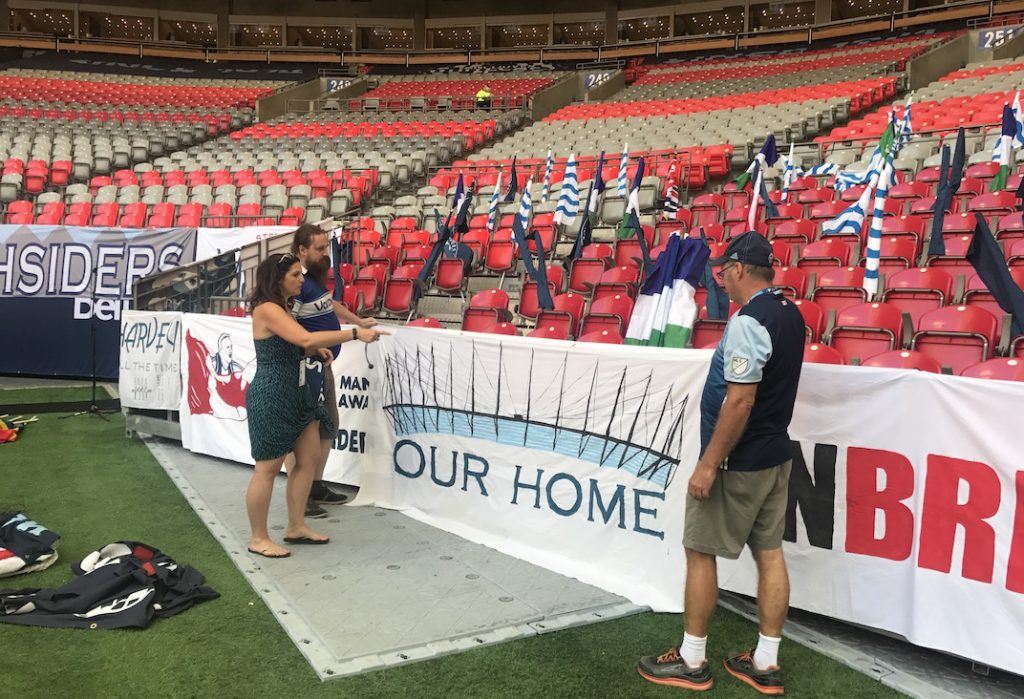 The match starts at 7 pm, but the work begins at 4:15 pm. Darcie Kerr, who organizes set-up for games, is joined by Southsiders president and club secretary Peter Czimmermann, as well as Patrick Heide.

The banners, or “tifos,” as they’re known in soccer circles, don’t hang themselves.

The Whitecaps played a home match four days earlier, so some of the banners remained up. That’s why Darcie refers to this as a ‘light’ set-up.

Still, it takes an hour to get everything looking right, as players warm-up on the field in an otherwise empty BC Place Stadium. 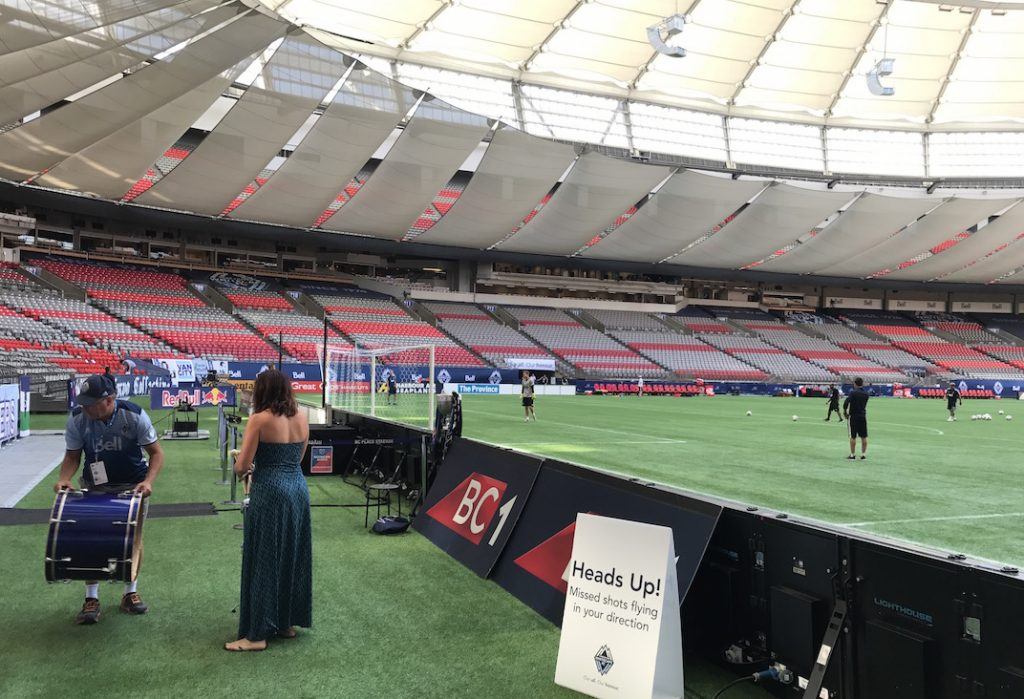 Being set-up are hand-painted tifos, flags, and drums. 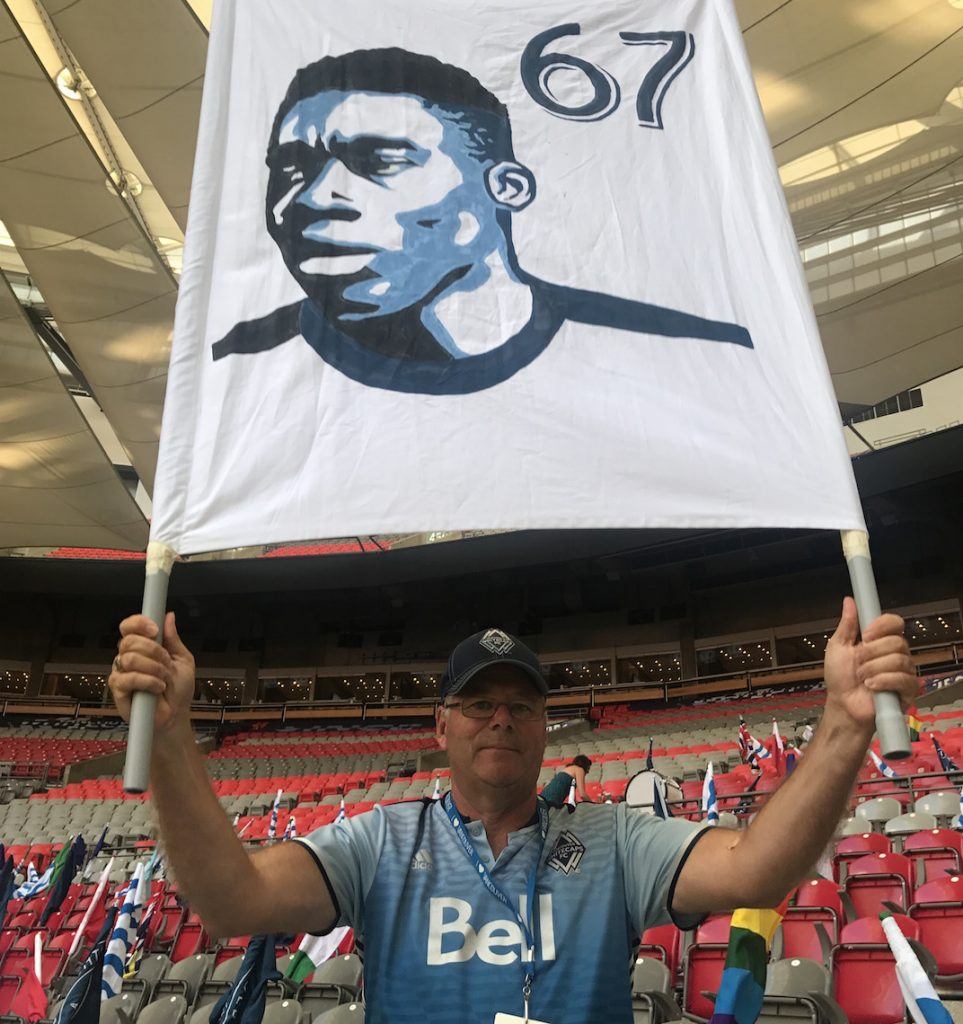 Most of the banners you see have been hand painted. Darcie estimates that one of their tifos that raised into the air, with the help of a series of pulleys, took about 160 hours to make.

“Soccer’s all about how we interact with each other,” Darcie says, as the group at the stadium finishes set-up. Now, it’s off to the pub.

We jump into Darcie’s car and race up to Granville Street to Doolin’s by 5:30 to join a large group of Southsiders who are, uh, warming up. Doolin’s is the Southsiders’ bar before home games and during road matches.

It’s covered wall to wall with Southsiders, and this is a quiet night because it’s a weekday. They fill both levels of the pub on a Saturday.

It begins like a family get-together at the Irish pub. Everyone seemingly knows everyone, as people order their food and drinks.

Notable superfan Kristjan Aug has flown in from Toronto for this match. He is greeted with a few hugs from other supporters. It’s not the first time he’s made a long journey just to watch his team play. 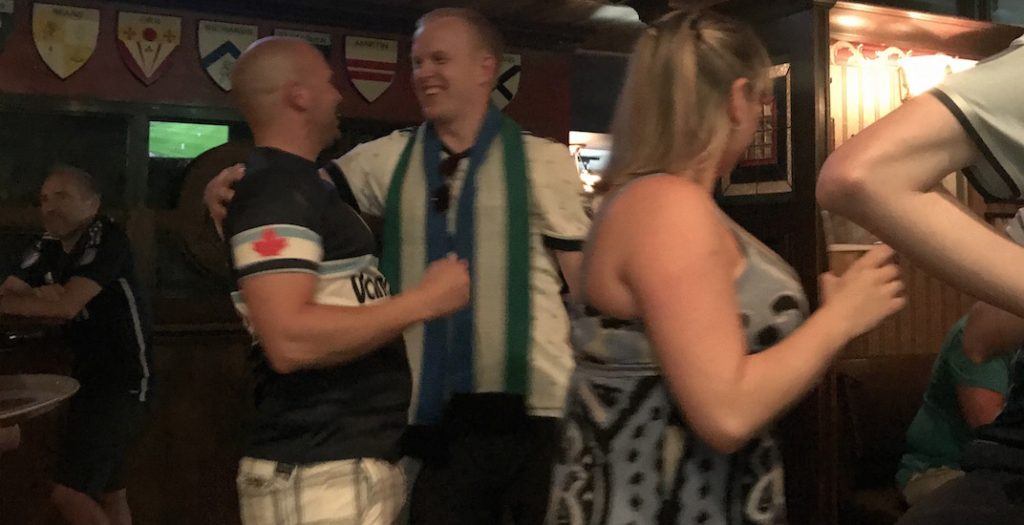 “With the Southsiders, it’s a different kind of experience,” Southsiders vice president John Knox, who has been with the supporters group since the beginning, said in an interview with Daily Hive. “It takes up your whole day. You’re going to go to the pub first and meet up with friends. There’s a very social aspect to it. You have this feeling that you’re in this together for the long run.

“Your whole day revolves around the outcome of this match and what you can do to influence that match – whether it’s by cheering or yelling, and waving flags.”

The noise level begins to intensify as we approach 6:15, as everyone prepares for the march to the match.

The march to the match starts at the corner of Granville and Nelson Street for every home game, and it is a spectacle.

Flags, scarves, tifos, drums, megaphones, blue/white smoke makers, and a whole lot of Southsiders make for quite a sight. They’re a tourist attraction for some, who stop in their tracks to take a photo of the massive group that walks down Granville Street, makes a right turn at Robson Street, and arrives at Terry Fox Plaza, greeted by more cameras.

Because this is a Cascadia Cup match, his royal highness the King of Cascadia, is on the march. That’s Southsiders ombudsman Andrew Van Eden you see in the videos dressed in a blue suit and red crown.

The Whitecaps are the current holders of the Cascadia Cup, given annually to the supporters of the team that earns the most points in games played between Vancouver, Seattle, and Portland. 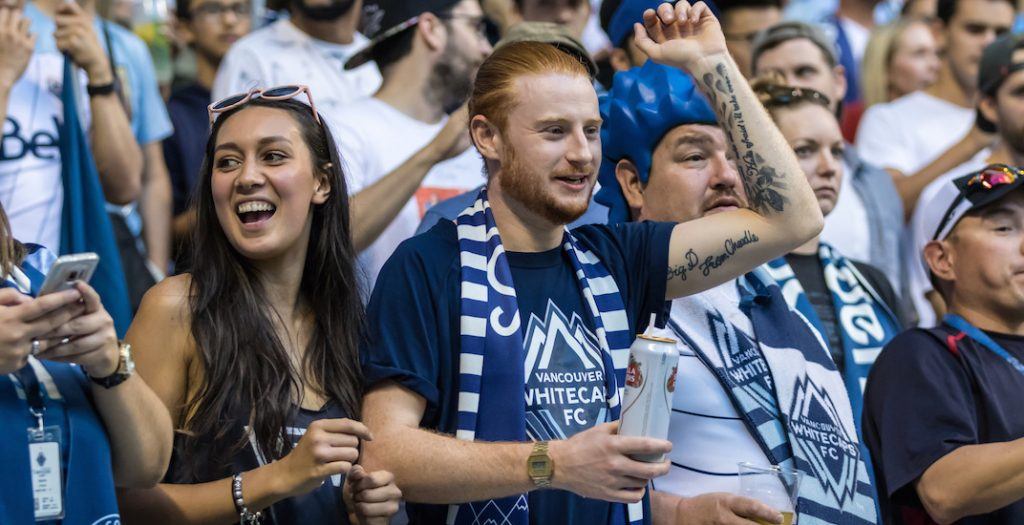 The vast majority of the noise at Whitecaps matches comes from one end of the stadium. The south side.

While the Southsiders are not the only supporters groups – Curva Collective and RainCity Brigade also take up space on the south end – they are the largest. There’s a lot that goes into the songs and chants during the game. 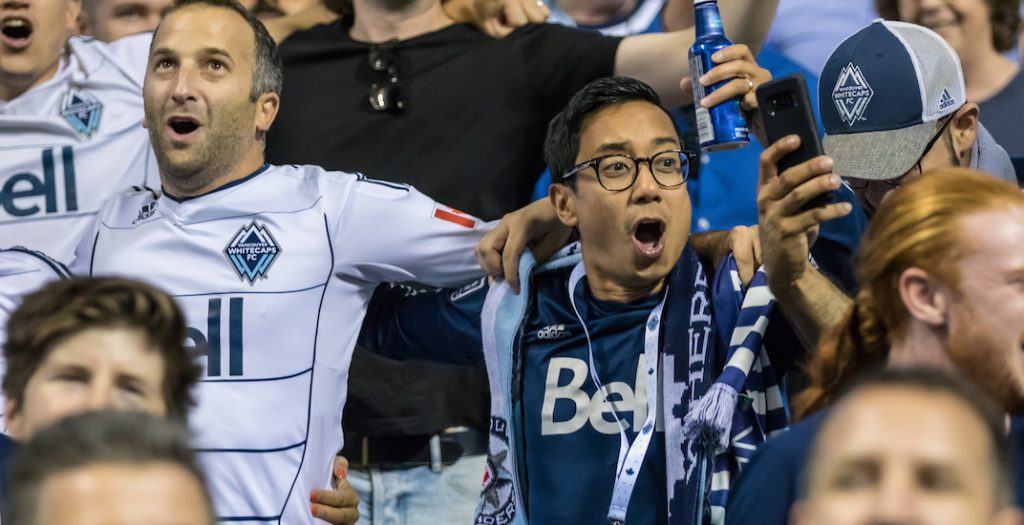 There are drummers, who literally get a workout during the match. There are also capos, who act as conductors for their orchestra. The Southsiders’ capos are volunteers who stand on the field facing the supporters. It takes a special kind of dedication to the cause to agree to have your back to the field of play. 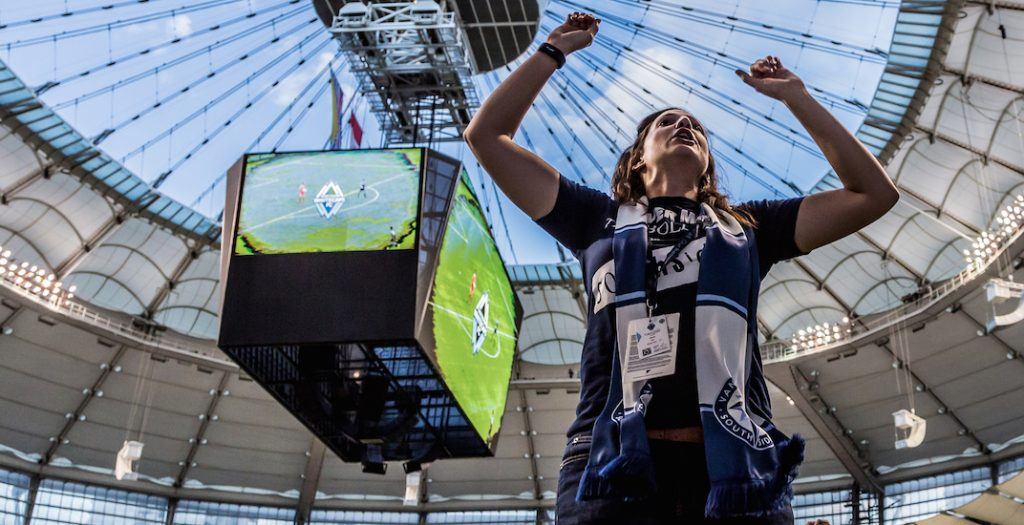 Capos help reinforce songs/chants, rather than start them. Those start from the stands.

This song – although not the most well participated one – was my favourite because of the accompanying coordinated dance:

“There’s this whole belief – and I believe a legitimate belief – that you can make a difference with what happens on the field.” 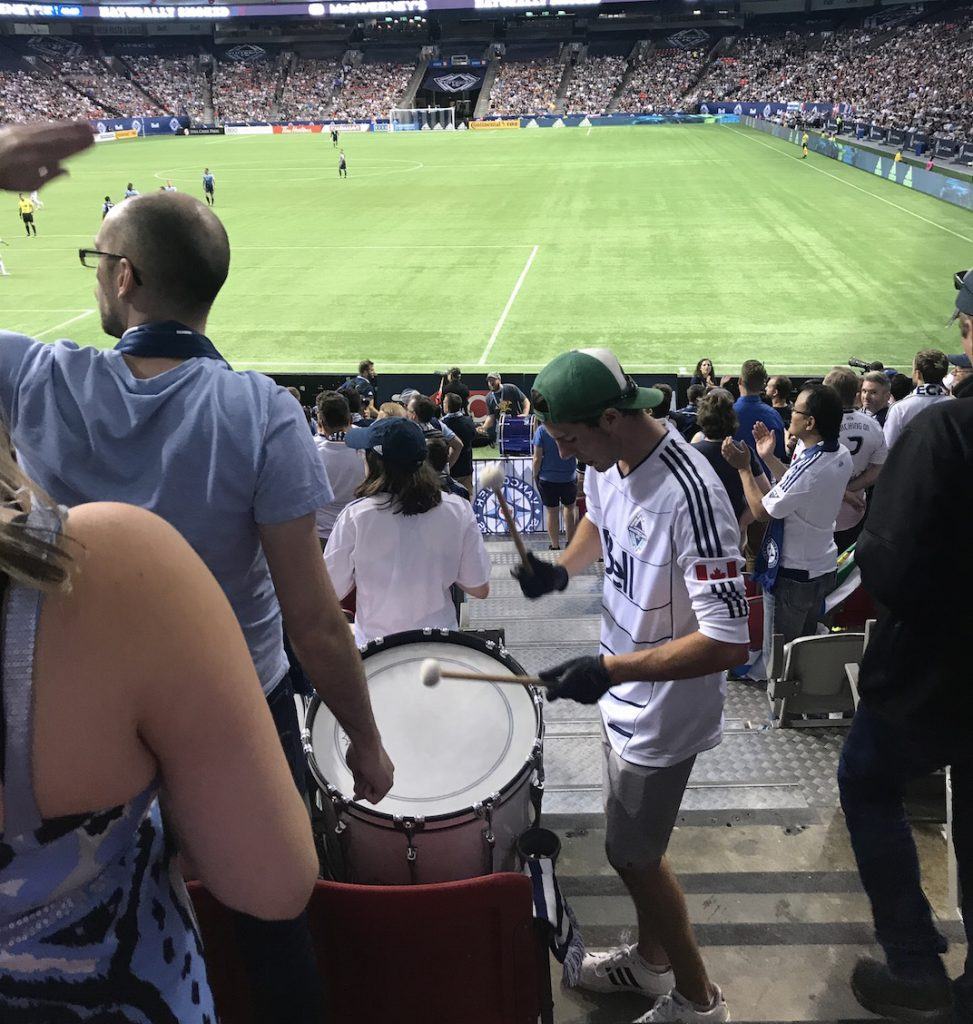 The south side isn’t for everyone. If you want to sit and have a quiet conversation with your neighbour, it’ll prove to be difficult. And that’s how it should be.

This is a place for fans, noise, and unwavering support. 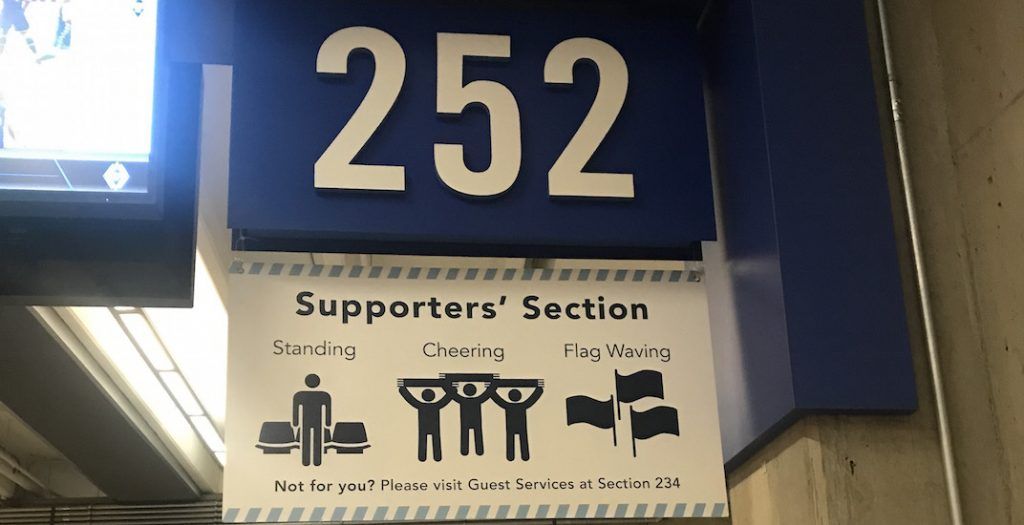 The chants may have helped the cause on this evening, as Alphonso Davies set up Fredy Montero – in front of the Southsiders – in the second half to level the match that ended in a 1-1 draw.

Life as a Whitecaps supporter is not without its challenges.

The Southsiders sit on the south side of BC Place, to the east of the tunnel that leads to the dressing rooms. RainCity Brigade and Curva Collective are on the other side. While they try to coordinate some chants, for the most part, they are three groups doing different things to support their team.

Imagine if they could all work together in unison.

My assumption has always been that they don’t want to work together and that their differences have gotten in the way of having a bigger impact on the game. Not so, Knox says.

“BC Place is an awful beast that does not get along with sound,” the longtime Southsider said, yearning for a soccer-specific stadium.

While fans at the other side of the field may be able to hear the Southsiders, their neighbours on the south side find it difficult.

The tunnel on the south end of BC Place – which is bigger than you think – serves to act as a divide between the Southsiders and other supporters.

Also hurting the cause? Bandwagonners.

While it costs just $30 to join the Southsiders and they have 1200 members, not everyone in their section is a card carrying member. Anyone can buy a ticket to sit among them, and not everyone is an active participant.

“You have pockets of great supporters who are surrounded by people who are attending matches for the first time, they’ve bought tickets from scalpers, people who are more interested in watching and being near supporters but not necessarily taking part,” Knox said.

It’s part of the reason why the Southsiders want general admission (non-assigned seating) in their section. That would help group the early-arriving fans, who are often the most vocal, together.

“You get your most noisiest, rowdiest, most boisterous supporters together as a pack. The outcome of that is we’re much louder, we have a greater ability of influencing the people around us into joining in.”

That’s something they’ve been able to enjoy in Seattle and Portland, but not in Vancouver. It’s a disagreement between club and supporters.

“We meet regularly with our supporter groups and are constantly looking at ways we can grow this important part of our fan experience,” Whitecaps COO Rachel Lewis told Daily Hive. “We spent considerable time researching [general admission], got feedback from other MLS clubs, and sent out a survey to gather input from every season ticket member in the white section.”

While the response the Southsiders received from their members was overwhelmingly in favour of a GA section, two-thirds of the respondents to the Whitecaps’ survey voted against the change.

The Southsiders are now organizing their own voluntary, self-organized and self-managed general admission section.

Not only does not controlling access to their section hurt noise levels, but the Southsiders are in essence responsible for whatever happens on their turf. If someone yells something inappropriate – whether that be racist, sexist, or just in poor taste – it reflects poorly on the supporters group.

That was a big problem during their first year in MLS, Knox said.

“There was definitely an adjustment period in that first season to make sure that people understood what we were about and what we stood for, and what we weren’t prepared to tolerate.”

“We were getting emails from people that thought that these people that had said awful homophobic or racist things were Southsiders.”

The reality is that kind of behaviour is extremely anti-Southsider.

The group unveiled a giant rainbow tifo in support of Pride celebrations this month. They canceled plans to attend road matches in the United States after Donald Trump tried to ban muslims from entering the country.

Now, that’s not to say everything that goes on with the Southsiders is PG.

Their chants (and they have many), sometimes include a few curse words (although there’s always the option of yelling the cleaner version).

Opposing players are serenaded with “Wanker!” as their names are introduced on the public address system. Opposing goalkeepers are greeted with “You fat bastard!” for every goal kick.

But it’s all in good fun.

After the final whistle is blown and most fans head for the exits, many of the Southsiders stick around. 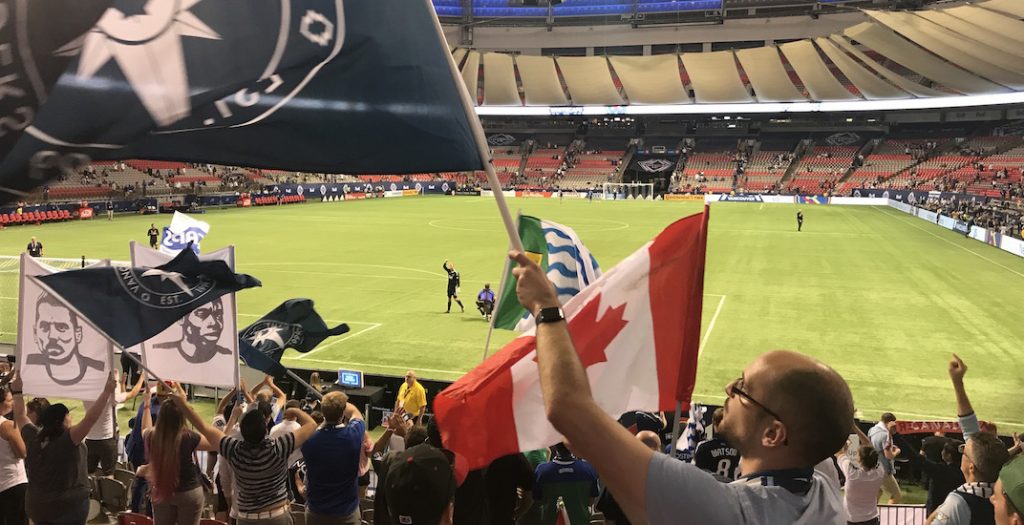 They’re waiting to salute the players coming off the pitch. The players send the love right back also. Two in particular, American defender Jordan Harvey and Danish goalkeeper David Ousted (waving in the above photo), always make sure to show their appreciation.

After hanging out with the Southsiders for one evening, I can understand why.