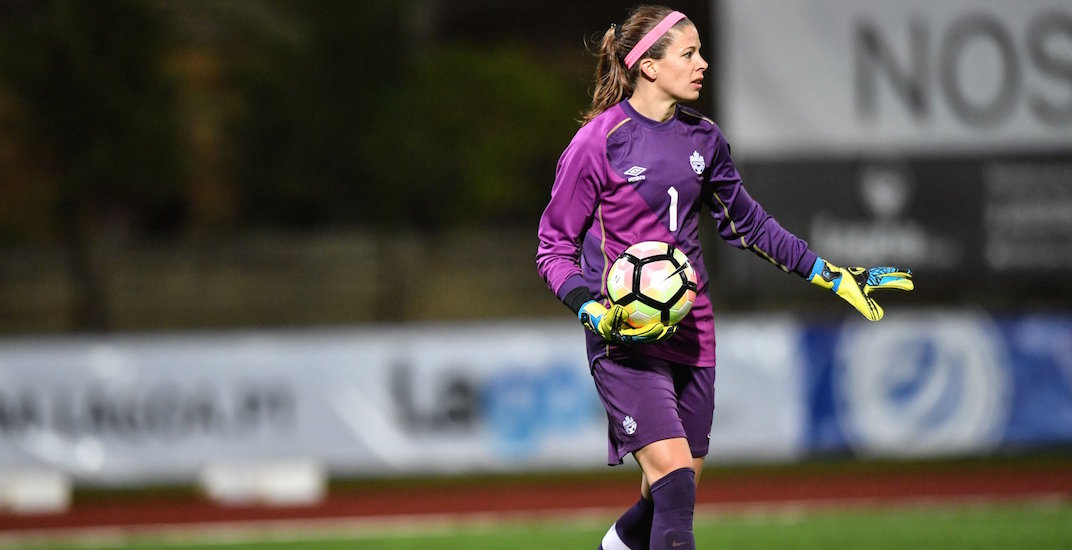 The 31-year-old goalkeeper has been playing professionally for nearly a decade, and helped the Canadian Women’s National Team win a bronze medal at the 2016 Rio Olympics.

Earlier this spring, Labbé left the Washington Spirit, a team that plays in the National Women’s Soccer League, citing a desire to seek new opportunities and challenges.

“It is no secret that I have decided not to return to the NWSL this year,”  Labbé  wrote on her personal blog earlier this year. “With that said, I have decided to take my career to the men’s pro soccer world. This is the best option for me at this time.”

We are delighted to welcome @CanadaSoccerEN #CanWNT Goalkeeper ✋🤚 @stephlabbe1 to our club to compete for a spot on the roster of our @FoothillsFCU23 team for 2018.

Labbé went to the Calgary Foothills FC U23 preseason camp, and in due course won a place on the squad.

Since 2015, Foothills FC have been competing in the Premier Development League, which is operated by the United Soccer Leagues. Currently, there are 74 PDL teams playing across the United States and Canada.

“I can’t say enough about this group of guys,” said Labbé. “The staff and club opened up their door to this opportunity and made me feel so welcome.”

But shockingly, league management has decided that Labbé is ineligible to play in the PDL because of her gender. Even with the support of her club, the league refused to budge, saying their decision was based on gender-based eligibility requirements.

The PDL’s decision means that Canada’s top shot stopper faces months on the sidelines, a lengthy period of time for an athlete at the peak of her career.

Labbé doesn’t even have the option to sign with a pro women’s team until the summer at the earliest. Frustratingly, the deadline to sign for a North American pro women’s team passed earlier this spring.

“The club is looking into ways around this to support Steph staying,” said Foothills FC head coach Tommy Wheeldon Jr. “As given the short season length, any appeal would eat into valuable playing time.”

The league has denied any appeals of their decision, so unless the PDL changes their mind, Labbé will not be playing competitively for Foothills FC anytime soon.

“While I partially understand the league’s stance on this, it is still unsettling,” added Labbé. “There are moments that stick with us for life, and I believe this is one of them for me.”

I'm on team Stephanie Labbe right here. Shame on you PDL. That woman is one hell of an athlete, great enough to succeed in your league. #labbe #teamlabbe #pdl

Ive been fortunate to play in leagues that only focus on skill, ability & most importantly development. They do not discriminate based on race, sex or age. Thank you @SPHL @ACACMens @TheAJHL for developing me into the player & person I am today.
Regarding @USLPDL on @stephlabbe1

While the PDL made the decision to block Labbé from playing, there is still time for league officials to do the right thing and reverse their shameful decision.

“This may be the first road block, but hearing ‘no’ doesn’t mean the end, it just means we have to find a diversion around the problem.

“Whether it is for me or for a young girl who has followed my journey and one day dreams of forging her own path, I will join her fight. Because no one should ever have an opportunity denied solely because of their gender.”