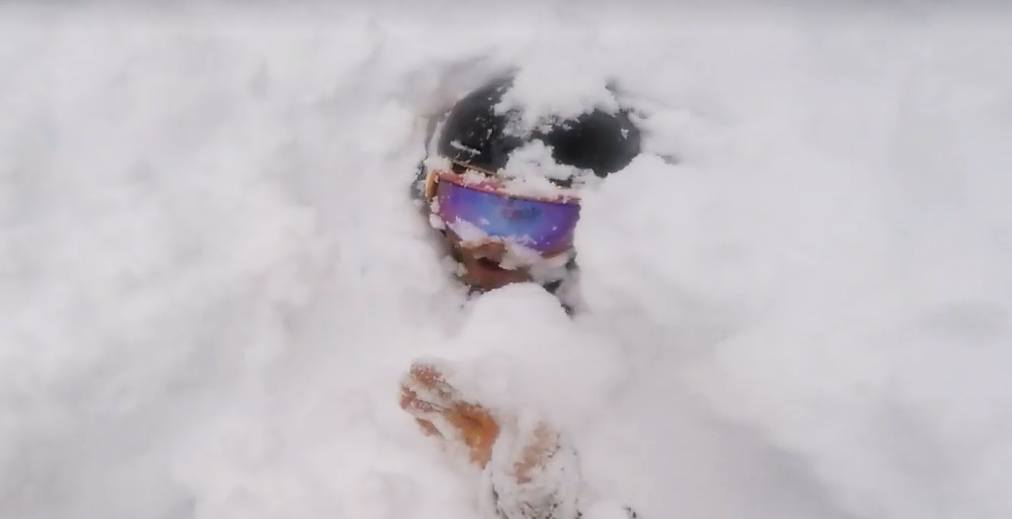 We’ve all seen snowboarding near misses, but this is something else. Filmed at Whistler Blackcomb last weekend, this is heart-stopping footage that you won’t forget.

Squamish resident Nigel Landon Beaupre and his friend Jordan O’Connell were snowboarding at the resort last weekend, when O’Connell got buried in deep snow.

Thankfully, Beaupre managed to rescue him, and this week posted a video (that you can watch below) showing the whole event, caught on the GoPro he was wearing.

“It’s not every day you have to dig your friend out of the snow to save his life… let alone get it all on GoPro,” writes Beaupre on Facebook.

“It just goes to show how quick things go from having a great time to near tragic experience.”

The video shows footage captured on Beaupre’s GoPro, as he rides through deep powder in a wooded area at Whistler Blackcomb.

As he approaches a rocky overhang, he sees his friend Jordan O’Connell, who is sat in the deep snow at the top of overhand, unsure of how to get down.

“You on it Jordan?” Beaupre shouts, before dropping off the overhang, onto a deep snowbank underneath.

Beaupre stops and turns around to check on O’Connell, but his friend is having trouble getting down.

“Creep it, you’ve got to creep it off the edge,” advises Beaupre.

But the two can’t see any other way down, so Beaupre tries to direct his friend towards the easiest route over the overhang.

And then, in one terrifying moment everything changes.

O’Connell jumps off the edge – and drops straight down into the powder underneath and is completely buried under the snow.

Beaupre digs out his friend, head first, to ensure he can breathe. “Hey buddy!” says O’Connell, as Beaupre reaches for his head to clear his mouth and nose.

“Don’t move,” orders Beaupre as he digs in the deep snow, trying to find O’Connell’s arm, so he can lift him out.

Beaupre calls out to other passing snowboarders and skiers to help him – but no one stops.

Finally Beaupre manages to find his friend’s arm and pulls him out of the snow.

“Holy fuck! You just disappeared bro, disappeared,” says Beaupre, as his friend stands and they both reflect on his lucky escape.

In comments under the video, Beaupre says it was a natural reaction to act so quickly, and he was just returning the favour for his friend, who rescued him from a tree well six years ago.

Where to get deep snow safety training

Here are four places offering an Avalanche Skills Training (AST) Level 1 course in Vancouver, which could help you cope in a similar situation to Beaupre and O’Connell: