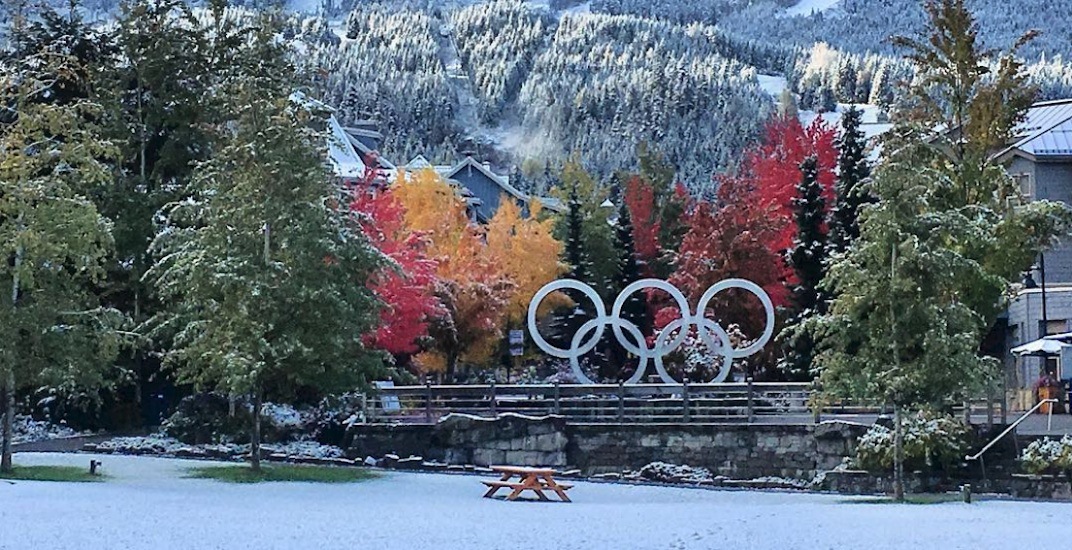 Snow fell all the way down to the village in Whistler this week. (@runningtotheendoftheworld / Instagram)

Grouse got some snow, Cypress got some snow, and further up the Sea-to-Sky, much to the delight of locals and tourists, it also snowed at Whistler this week.

And not just on the mountain’s high peaks, as it did earlier in September. No, this week it snowed all the way down to the village base.

Flanked by fall colours, a fresh layer of the white stuff was seen throughout the resort, and those who witnessed it wasted no time in sharing their snow shots on social media.

So what does this mean for the winter season? Could we see an earlier opening perhaps? It’s hard to say at this point, but putting an extra step or two in your snow-dance certainly wouldn’t hurt.

In the meantime, here are some shots of the snow this week to help you dream of the deep days to come.

First snow of the season in the Valley! I meant to bring my camera to get this shot RAW but I forgot it so I did my best with iPhone SE. Olvidé mi cámara y fue lo mejor que pude tomar con mi iPhone SE. Primera nevada de la temporada en el Valle. #whistler #bc #canada #autumn #fall #snow #mountain

We love the smell of fresh snow in the morning. The mountains are now dressed in white, from peak to valley. | 📸: @coastmtnphoto / Mitch Winton | taken: Oct 13, 2017 | #InTheNameOfWinter |