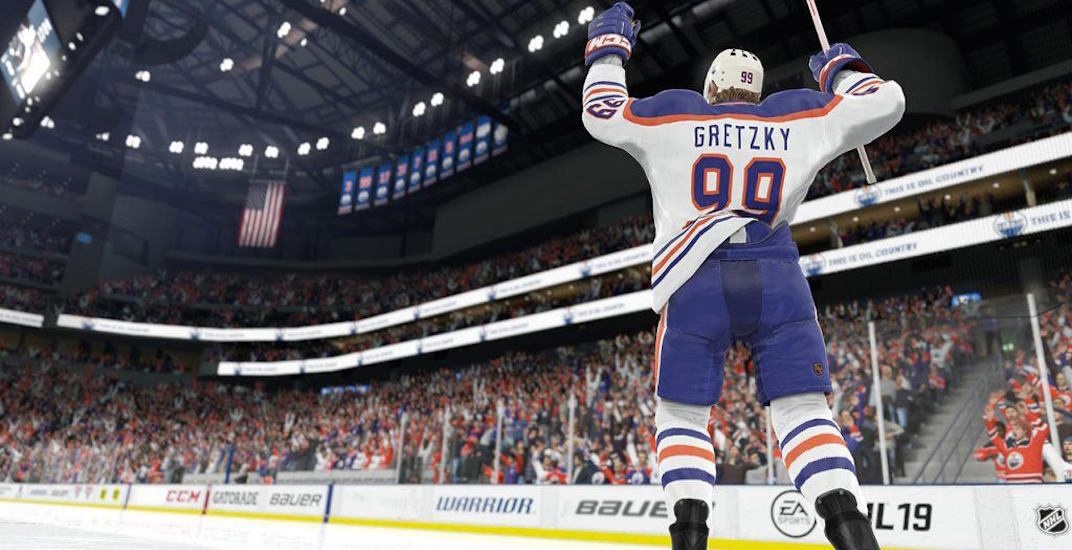 Every year, as the latest edition of NHL is released on PlayStation 4 and Xbox 1, Electronic Arts (EA) attempts to raise the bar and create a game that’s more realistic, offers more hours of gameplay, and of course, is more fun.

With the release of NHL 19 just over two weeks away, those who haven’t made the choice to pre-order a copy will be asking all the same questions.

What’s new, what’s better, and is it worth it? 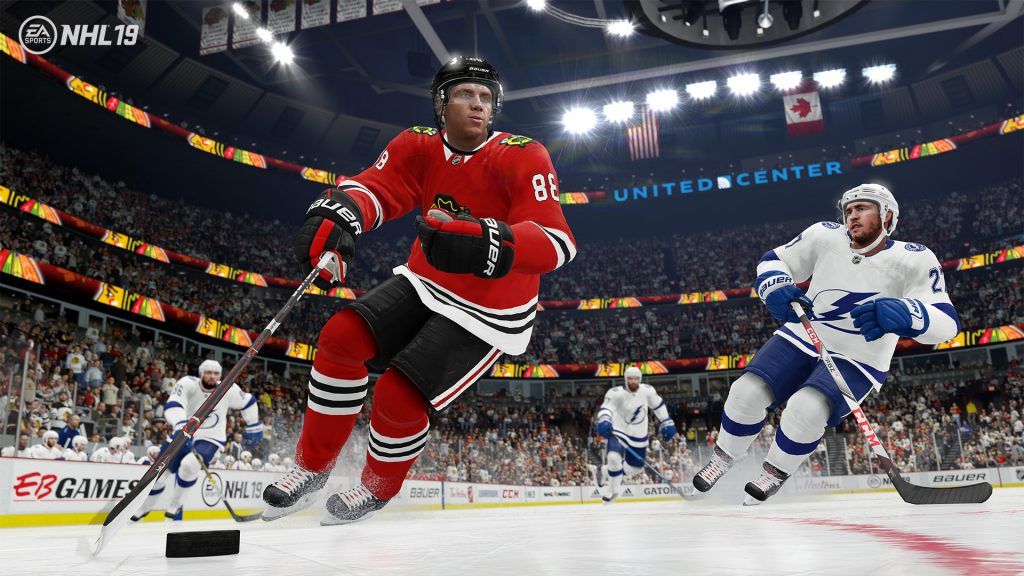 Kane skating with the puck

EA was kind enough to take give Daily Hive a one-hour sneak peek of their latest creation at the Electronic Arts head office in Burnaby, BC.

Before starting off, it’s worth explaining my gaming (and hockey) background. As someone who grew up playing minor hockey (and now beer league), the NHL series has been a rite of passage for a number of years.

I spend less time on online play and EASHL but perhaps that’s where the value of this sneak peek lies. 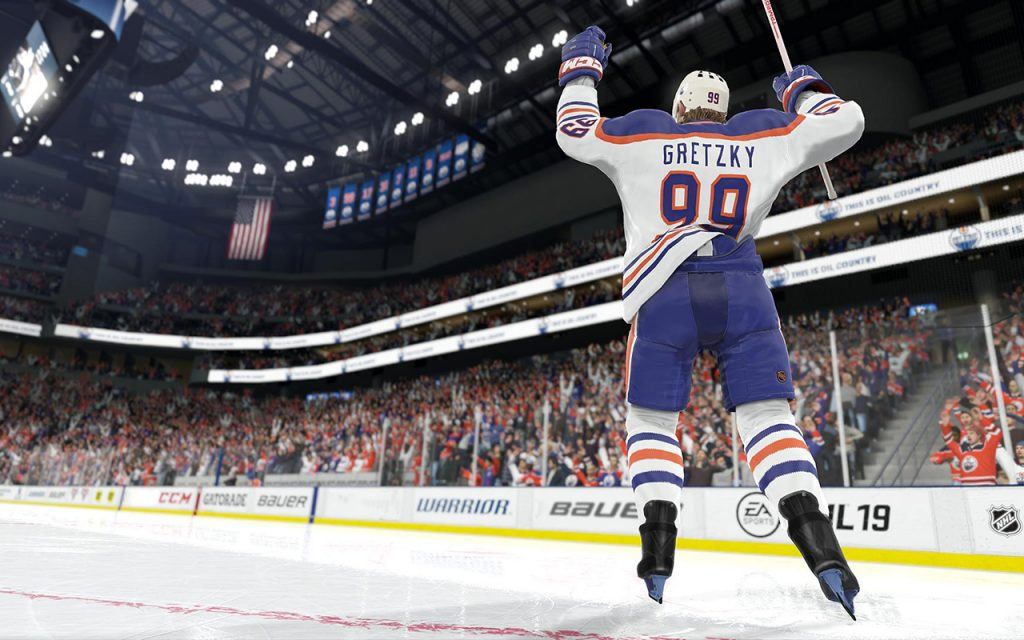 Wayne Gretzky, one of the NHL greats that players will be able to use in-game.

Those who make the commitment to online competitive play have likely made their choice about whether to purchase the game or not.

But for a casual gamer, a newly-born hockey fan, or someone who just wants to play the game when friends are over, is NHL 19 worth purchasing or not? 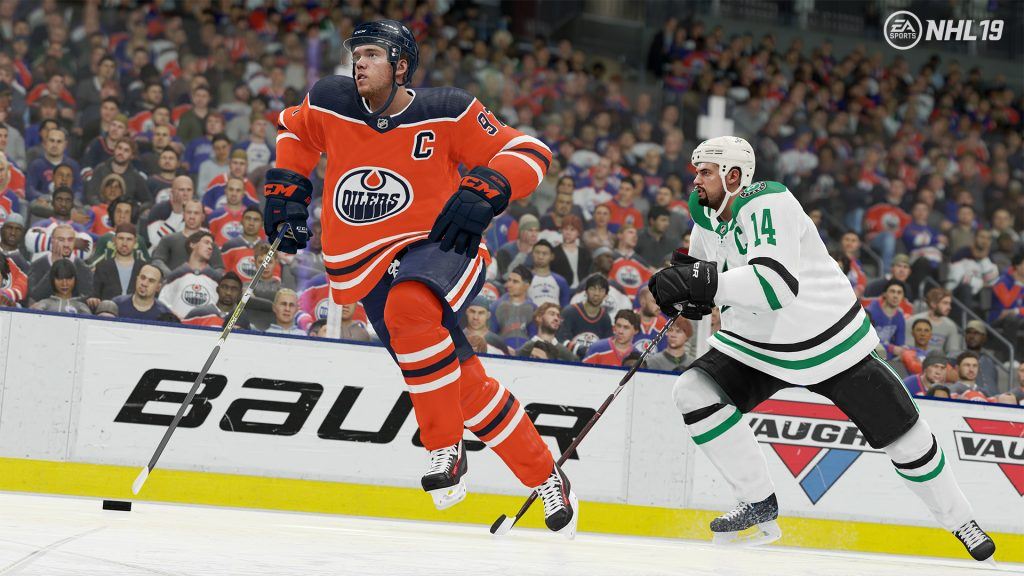 A screen capture of Connor McDavid performing crossovers with the puck.

While the gameplay was always fun, it always felt just a little far off from what actual skating was really like (naturally).

To do away with the fluff and technical lingo, the best way to explain it is this: previous versions of the game felt like they were heavily reliant on forward strides. Side-to-side movement and actions like crossovers and tight turns felt rather unrealistic. 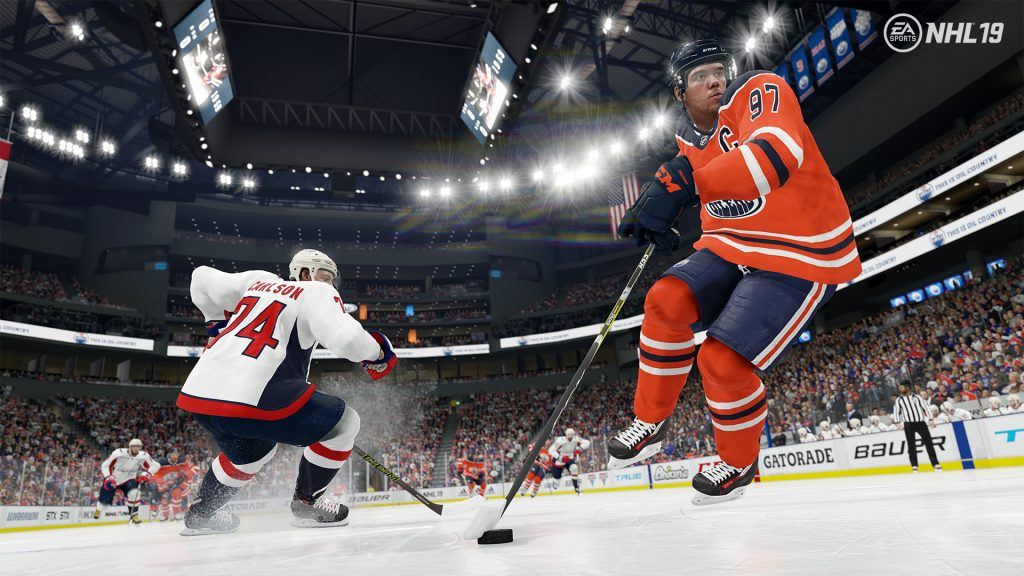 This newly-designed skating engine, supposedly based on Connor McDavid’s skating style, gives a greater emphasis on forward crossovers and edgework – tools that have always existed in the game of hockey but are being emphasized more with a younger generation of NHL skaters.

Here’s a comparison of what skating looks like from NHL 18 and NHL 19.

And just for good measure, here’s a quick glimpse of some younger players putting their crossovers to work:

While you may not be seeing your characters in game performing as many crossovers as McDavid or Barzal do here, it’s definitely a much-needed improvement. 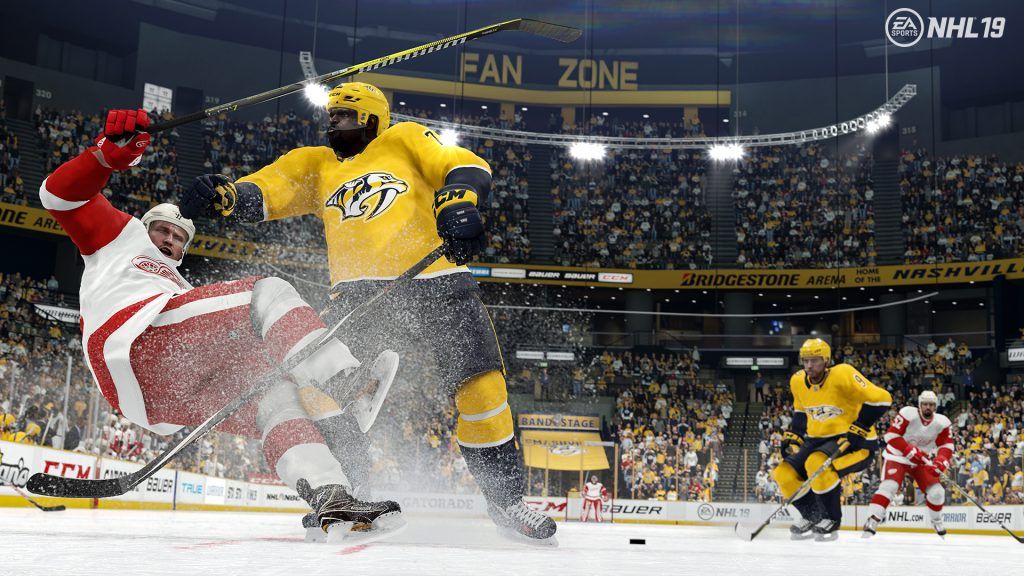 Also revamped for this year’s game is a physics collision engine, that once again looks to make body contact more realistic.

According to William Ho, Creative Director of the NHL series, body contact in the game will vary based on the point of contact – whether that be the shoulder, forearm, elbow, or hips. 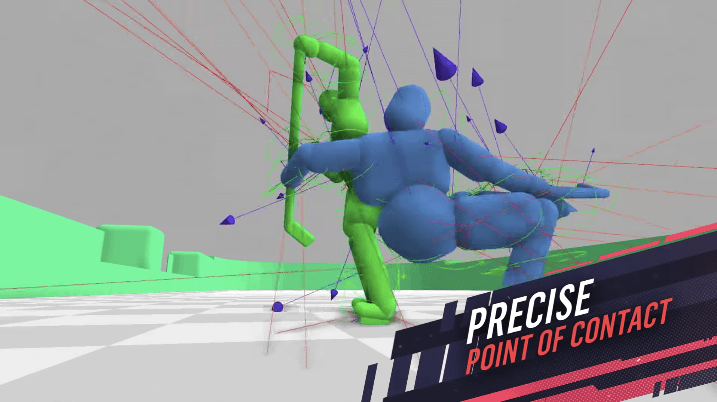 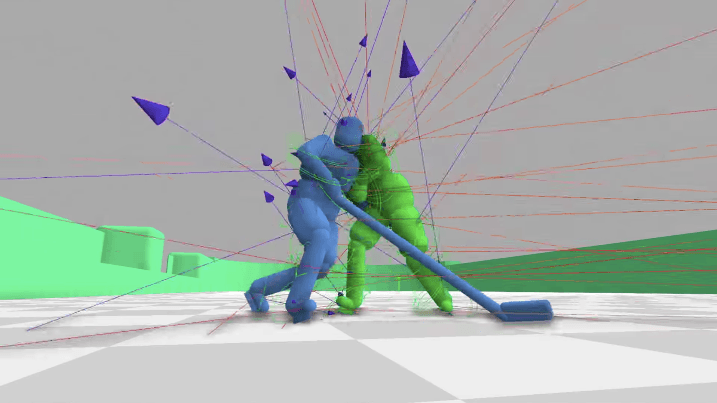 Smaller checks done with less momentum or with different contact points will still cause a collision with the opponent’s player, but don’t expect their character to crumple over.

More emphasis is put on timing and body positioning, which arguably create more fulfilling and real exchanges with or without the puck. 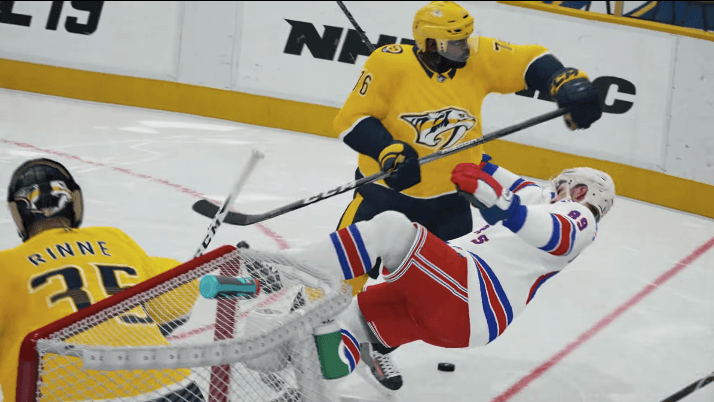 Ho also explains that a player’s size in-game will have an impact on how they move, skate, and hit. Like in the NHL, smaller players and larger players will move and react to collisions differently.

While it was definitely easier to lay huge bodychecks on players in previous games, the more balanced gameplay is a very welcome change. 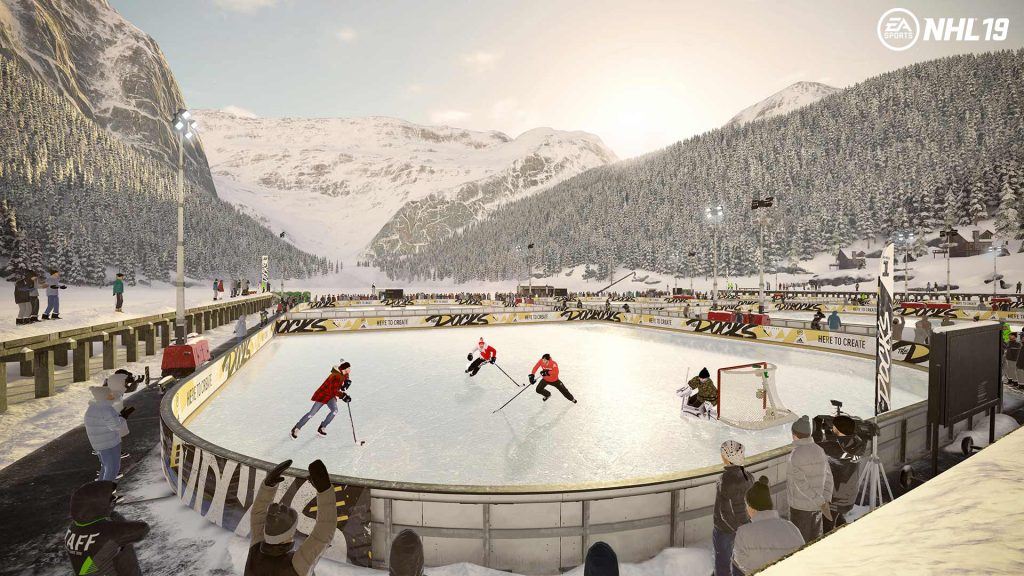 Skating systems and physics engines aside, the newest game mode entering NHL 19 is “Ones.”

When NHL 18 introduced “Threes” into last year’s game, they brought in a relaxed and almost comical game mode that helps cater to those looking for a less serious style of play.

Ones is an every-player-for-himself game with three players, half-court style, on an outdoor rink.

Games are only three minutes long and possession switches based on whoever has the puck, allowing for higher scores and less interruption. A welcome change is that unlike NHL Threes, hitting is less arcade-like and an outdoor setting gives greater focus to aesthetics. 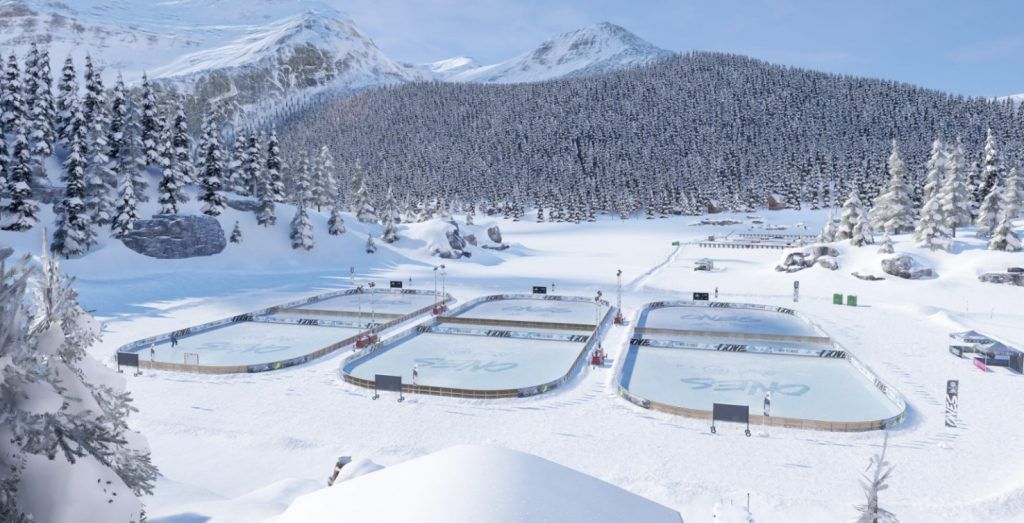 Players can build characters based on different skater-archetypes like a power forward, dangler, grinder, sniper, and shooter. Each player on the outdoor rink can customize their equipment and apparel, giving the choice of a jersey, hoodie, or winter jacket.

It’s a less serious game mode but at the end of the day, it’s fun.

There are still a number of ways the NHL series can improve. Franchise Mode and Be-A-Pro Mode still remain without a cohesive storyline, something that developers can hopefully add in the coming years.

That being said, between more realistic skating and an immersive take on pond hockey, NHL 19 looks like a welcome improvement. It’ll be available to the public on Friday, September 14.