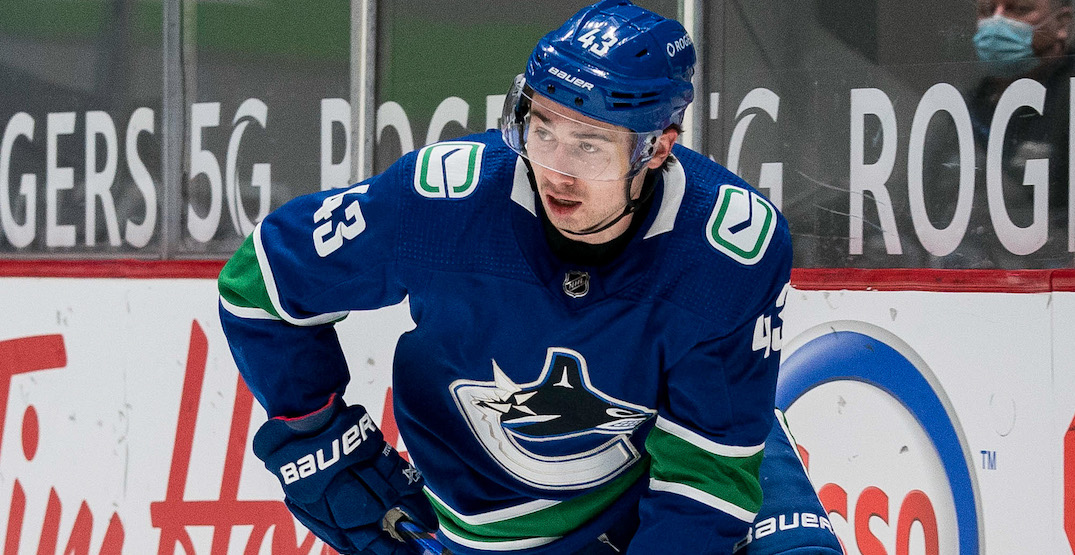 The Canucks COVID outbreak is a big deal beyond Vancouver, Canada, and even North America.

Believe it or not, news of it made it all the way to Qatar, where Al Jazeera English was contacting Canucks reporters this morning to be interviewed for a story.

The Canucks certainly aren’t the first pro franchise in the world to deal with an outbreak of the virus, but the way in which a COVID variant has ripped through the team does seem to make this situation unique.

“Quinn had one of the roughest goes with COVID”

Quinn Hughes and Jay Beagle were removed from the NHL’s COVID list on Tuesday, leaving 16 Canucks players on the team’s active roster still in protocol. More are expected to come off the list this afternoon, but certainly not all.

Beagle appears to be a false positive, as he was the last player added to the list on Sunday.

Hughes, on the other hand, appears to have endured a very tough couple of weeks according to Matt Sekeres.

“My understanding is Quinn had one of the roughest goes with COVID amongst the Canucks,” Sekeres said on his new live streaming show with Blake Price. “There were reports of IVs for Quinn Hughes. I think he lost some weight.”

One of the few Canucks players who didn’t test positive for COVID-19 was Jordie Benn.

Benn tested positive in January, of course, and said on Tuesday that he had blood-work done to show that he likely still had the antibodies to protect him.

“I wasn’t too concerned that I was gonna get it again,” Benn said at his first media availability as a member of the Winnipeg Jets. “One or two guys [on the Canucks] that have had it, got it again. They’re not showing any symptoms, but they did test positive.”

“Some guys are feeling pretty bad.”

Benn added that when he had COVID, he didn’t have any symptoms.

“When 40 popped up I thought of Petey. So I was just like ‘I’m gonna take his number with the Jets,'” Benn joked. “Forty sounded pretty good.”

Do your dekes, Jordie.

Time to rebuild the 4th line

Also in their favour is the fact that they’re really excited to get a chance with their new team, so they should provide a much-needed jolt of enthusiasm for a group that’s about to play 19 games in 31 days.

A self-professed energy player, Highmore should be a welcome addition at a time like this.

“I want to get in on the forecheck, create turnovers, be responsible defensively, and ultimately get the puck to the front of the net,” said Highmore. That’s kind of the way I like to play hockey.”

One of the things the Canucks will need to do going forward is inject some youth into their bottom six forward group, including on the penalty kill. Brandon Sutter is a pending UFA, Jay Beagle is going to turn 36 this year, Antoine Roussel is slowing down, and Loui Eriksson is clearly not in the team’s plans.

Young, cheap players like Highmore are going to need to fill roles, especially given the team’s cap crunch.

The question regarding Highmore specifically, is if the 25-year-old can become a meaningful contributor at the NHL level. Some have compared him to Tyler Motte, and certainly the Canucks would be over the moon if he matches that contribution.

Highmore has played on the penalty kill at times during his career, but he’s by no means a PK specialist. His stat line — just 10 points in 73 career games — leaves a lot to be desired, though he did have a nice run of success in the playoff bubble last summer, scoring three goals and adding one assist in nine games for the Blackhawks.

“The bubble, personally, was a great step. I thought I took a good step towards being the player that I want to be. A lot of it was keeping my game simple, playing hard, and feeling comfortable in the league. Sometimes it’s tough, when you come into the league, to feel comfortable to be able to play your game.

“That was the next step for me. I felt that I was just more mature and certainly more ready to play, just being comfortable in the situation.”

Gaudette needs time to get in game shape

Adam Gaudette, won’t be suiting up for game action right away with the Chicago Blackhawks.

Blackhawks head coach Jeremy Colliton says Gaudette “will need time to get back in game shape” according to a report from Chris Boden of WGN-AM 720.

#Blackhawks Colliton indicates Gaudette will need time to get back in game shape after not being on the ice for some time as part of Canucks' group that contracted Covid.

That’s pretty telling when you consider the Blackhawks are in a playoff race, just four points out of the last playoff spot in the Central Division with a game in hand and only 13 games to go.

What kind of roster will the Canucks ice on Friday?

If Gaudette — the first Canucks player to come off the COVID list — isn’t in game shape, what on Earth can we expect from his ex-Canucks teammates?

The Canucks are only doing individual practice sessions on Wednesday, meaning that they’ll likely only get one practice together as a team on Thursday before Friday’s game.

How many AHL players will have to suit up? Will Michael DiPietro need to start in goal? He hasn’t played a game in 399 days, by the way. Arthurs Silovs was called up to the taxi squad, which suggests that DiPietro will have to fill in on the main roster.

What will the coaching staff look like? Judging from Jim Benning’s comments this week, Travis Green was affected by the outbreak.

“Travis is feeling better every day… hopefully he’s ready to go when we get back,” said Benning.

With the Canucks likely to miss the playoffs for the fifth time in seven years under his watch, it doesn’t sound like Benning’s job is in jeopardy.

Only 10 current NHL general managers have held their position longer than Benning, who was hired on May 21, 2014: